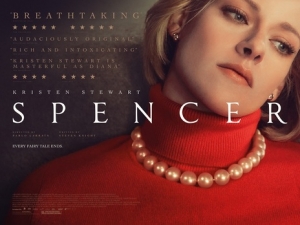 BASICALLY…: Princess Diana (Stewart) contemplates her future in the royal family during a Christmas gathering…

In my review for the last major Princess Diana-centric movie, 2013’s Diana which ended up being the worst movie of that year, I distinctly remember writing that the Naomi Watts-portrayed royal in that film was written in such a way that she less resembled the graceful figure we remember her as being, and more like a deceitful and sociopathic monster akin to Twilight’s Bella Swan.

What delicious irony it is to report, then, that the Diana movie to feature actual Bella Swan, Kristen Stewart, is by far the better Diana movie to have been made over the last decade. In fact, Spencer – directed by Pablo Larraín and written by Steven Knight – is a highly laudable piece of work which offers a very unique vision and portrayal of Diana’s tumultuous period within the highest institute in the land, and does things which I’m surprised to have not yet seen in other movies about the royal family.

The film – which introduces itself as “a fable from a true tragedy” – is set over a three-day Christmas period at the royal Sandringham estate in 1991, where the royal family is gathering for their annual festivities. Diana (Stewart) is one of the guests, although by this point her marriage to Prince Charles (Jack Farthing) is more than strained, and media scrutiny around her is so intense that there are strict instructions not to open up her bedroom curtains, lest a photographer be able to snap an unflattering picture of her from afar. Always under the vulture-like watch of royal equerry Alistair Gregory (Timothy Spall), and with her childhood home going to ruins just mere feet from the royal household, Diana finds the pressure on her fragile state of mind to be overwhelming, and ultimately makes a decision that could finally give her the liberation she desperately needs.

Making itself a strong companion piece to Larraín’s other semi-biopic Jackie, with Natalie Portman as the grieving former First Lady, Spencer also explores the raw psychological turmoil of a woman in the public eye undergoing a very different type of personal crisis. When we meet her in the film, Diana is a woman grasping onto the final remnants of her care-free personality, which has since been compressed by the expectations of the Crown and left her in a delicate, almost sacrificial position by her cold in-laws. Numerous psychoses including her much-publicised bulimia have clearly begun bubbling up to the surface, and the worst part is that she has very few people with whom she can truly be herself around, including – and sadly limited to – her young sons William and Harry (sweetly played by Jack Nielen and Freddie Spry respectively), the royal chef McGrady (Sean Harris) and her dresser Maggie (Sally Hawkins). Through carefully constructed writing and direction, claustrophobic cinematography, and especially an outstanding score by Jonny Greenwood, we get to see a rather horrifying scenario play out as the very essence of this poor woman’s soul is stamped out by those unwilling to accept change in their system.

This leads to one of the things I admire most about Larraín’s film, and that is how it is almost constructed like a gothic horror but with members of the royal family. There is always an eeriness to the mise-en-scène, even in shots that should be wholesome like the maids cleaning up a room littered with opened wrapping paper, only for everything to creepily stop dead in their tracks when Diana simply enters the room. Larraín rather cleverly uses the dreary, nightmarish atmosphere to craft an abstract visual portrayal of her deteriorating mental health, like a dinner scene that’s straight out of a Lucio Fulci horror movie in how it’s paced, shot and especially scored (with Greenwood’s soundtrack incorporating chilling violin strings next to a jazzy Birdman-like escalation), and a recurring motif of the ghost of Anne Boleyn appearing like Jacob Marley to Scrooge as a warning should she continue the way she is. That might sound too absurd to stomach, but it really does work in Spencer as a rather stunning interpretive opera (minus the singing, of course) of the sheer terror that Diana surely went through under the confides of the Crown.

Most importantly, though, you have an absolutely astonishing lead performance by Kristen Stewart to really sell this ambitious take on reality. Stewart never settles for impersonation, despite a pitch-perfect accent and almost uncanny physical resemblance, and instead aims for something deeper at her very soul, which she intelligently makes her own without feeling too exploitative about the real person’s struggles. The actress delivers an exceptionally human portrayal of a woman known the world over, at once vulnerable (a haunting shot of her in the bathroom examining a dress wearing nothing but underwear is testament to that) but also desperate to cling on to her charisma and charm that made her such a beloved figure. There are great scenes where she is simply playing with her children at candlelight, or laughing hysterically with one of her all-too-few allies, all of which are made so believable and heartfelt because Stewart really makes you feel for this person and wants you to root for her as she reclaims her happiness. We’ve seen Diana in the wrong creative hands before, so it is extra comforting to finally see Diana be portrayed in a way that celebrates her genuine warmth and humanity while also finding new and interesting ways to tell her story.

Next year marks the 25th anniversary of Princess Diana’s death, and the hope is that it is marked by instead celebrating the extraordinary life that she led, and the unique person that she undoubtedly was. Spencer should be the quintessential movie to be shown under this light, and not that godawful Naomi Watts one.

Spencer is a captivating visual interpretation of a key event in Princess Diana’s life, with director Pablo Larraín and writer Steven Knight infusing unexpected, but welcome, gothic horror attributes into a haunting story of compression and liberation, led by an absolutely astonishing Kristen Stewart in the lead role of the People’s Princess.

Spencer is now showing in cinemas nationwide – click here to find a screening near you!