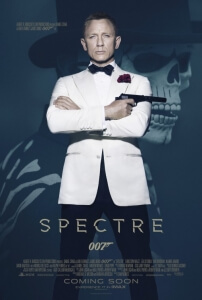 BASICALLY…: James Bond (Craig) discovers a cryptic message from his past, and soon comes face to face with the criminal organisation SPECTRE – which is led by Franz Oberhauser (Waltz), a face from Bond’s childhood…

Having kept the British end up for over fifty years now, the James Bond film series  has certainly evolved with the times, including a 2006 reboot of the series when it turned out that the 2002 CG-heavy mess Die Another Day did far more harm than good. With Daniel Craig replacing Pierce Brosnan and becoming the latest in a long line of actors to play Ian Fleming’s most famous creation, the series found new life with Casino Royale (and, to a lesser extent, Quantum of Solace) and solidified its revamped status with 2012’s Skyfall, the 50th anniversary celebration that broke box office records everywhere and is regarded as one of the new essential Bond flicks among most fans.

It was inevitable, however, for a rebooted franchise more grounded in Bourne-esque reality to pay homage to the traditional silliness and large spectacle that the eras of Sean Connery, Roger Moore et al provided back in the day – and SPECTRE, the 24th film in the official canon, delivers in large, audience-satisfying spades.

The titular organisation, last seen in 1971’s Diamonds Are Forever, has been at the centre of some behind-the-scenes legal troubles that have prevented them from appearing ever since (or at least, never by name), but now that’s all resolved SPECTRE is back as the ruthless criminal organisation that James Bond (Craig) uncovers whilst on a covert mission spurred by the ghostly orders of a past figure. After discovering that its head is a man from his own past, the previously thought-dead Franz Oberhauser (Christoph Waltz), 007 strikes a deal with former enemy Mr. White (Jesper Christensen) to protect his estranged daughter Madeleine Swann (Léa Seydoux) from SPECTRE’s harm and bring down the organisation and its equally-shady CEO in the process. What’s more, on the home front, the newly-appointed M (Ralph Fiennes) is wrestling with a proposed drone program that will effectively render all 00s useless, plans that are devised by Andrew Scott’s weasely government figure Max Denbigh, aka C (and no, it doesn’t take long for assumptions to be made about what that stands for).

The return of SPECTRE is just one of the many elements that make the film SPECTRE feel like classic Bond, even more so than any of the previous Craig outings. There’s the gun barrel sequence that’s back at the very opening, followed by an impressive opening sequence in Mexico City with a tracking shot that homages Orson Welles’ Touch of Evil; then, after the trippy (and undoubtedly hentai-inspired) opening sequence set to Sam Smith’s okay title track, we have the ingredients oft found in past Bond films from a beating down by M, to brief flirtations with Miss Moneypenny (Naomie Harris), to a trip to see gadget maestro Q (Ben Whishaw), to the various instances of globe-trotting with the hopes of getting some nifty action sequences out of places like Rome, Austria, Tangier etc. It’s easy to see why director Sam Mendes returned to the world of 007 after Skyfall, because who in their right mind could turn down a traditional Bond film in the 21st century? The temptation has, thankfully, translated into sheer passion here and Mendes clearly seems to be having much more fun this time round (not that he didn’t the first time, mind…) thanks to the insertion of much-needed humour into its more po-faced scenes, but never to a kind of campy level that even Roger Moore would blush at. He also shows more confidence in the film’s many scenes of action, whether it’s a car chase through the (surprisingly empty) streets of Rome, or a train punch-up with Dave Bautista’s near-silent henchman Mr. Hinx, the latter of which calls back to similar scrapes in From Russia With Love, all of which Mendes handles much better than most other action directors out there.

Craig, once again excelling as one of the more interesting interpretations of the character, gets to wrestle with more layers given to the character than ever before, and it results in the actor’s best performance as Bond to date – say whatever you want about Craig’s emotionless face, but when he looks angry he looks PISSED OFF – which, if he were to relinquish the role after this film (though he is contracted for one more outing after this), would mean that he’s at least going out on a high note. Everyone else does a good crowd-pleasing job, whether they’re fellow returning players – Fiennes in particular gets some great moments as M, proving that he’s more than up to the task made nearly impossible to follow by Judi Dench – or new additions like Seydoux’s tough nut Madeleine who’s one of the more memorable Bond girls since Eva Green’s Vesper Lynd. Strangely, out of a cast of undeniably talented individuals, perhaps the biggest disappointment is Waltz; the two-time Oscar winner does fine here, but he’s stuck with a bland villain role that doesn’t allow the charismatic Waltz to shine like he should in such a part (and, without giving away specifics, his character is subject to a reveal akin to Star Trek Into Darkness that makes his overall motivations a bit more pathetic than, say, Javier Bardem’s chilling Raoul Silva from Skyfall).

Though the film lacks visuals as stunning as the ones provided by legendary cinematographer Roger Deakins (Interstellar’s Hoyte van Hoytema replaces him this time), it’s still a great-looking film that takes full advantage of its scenery to display some wonderful shots (that opening tracking shot in particular, set during Mexico’s Day of the Dead festivities, is a delight); and returning composer Thomas Newman might not score as high points here as he did previously, but it’s like pointing out the flat note in a symphony by Beethoven, there’s simply none to really be found. From a further technical standpoint, from the production design to the costumes, it’s all spot-on and, most importantly, fun.

It will undoubtedly inspire lesser comparisons to Skyfall, but we feel that SPECTRE is a worthy follow-up that’s almost as good, and a solid reminder that the overall silliness of James Bond still has a place in modern day environments, even if his aggressive womanising skills certainly don’t (seriously, watch those films again and tell us that Bond WASN’T a right predator back then…)

SPECTRE is good old-fashioned Bond, mixing the elements of the old and the new to craft a technically impressive and, most importantly, fun spectacle of a movie, and while it momentarily suffers from a disappointingly weak villain it’s still a strong reminder of how the familiar tropes and formulae of the series can still make for highly entertaining cinema.