The Space Between Us (Review)

The Space Between Us (Review) 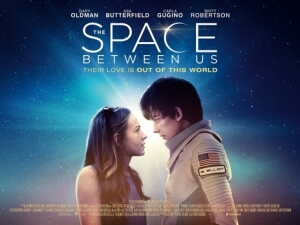 BASICALLY…: A teenager (Butterfield) born and raised on Mars travels to Earth for the first time to find the girl he’s been communicating with (Robertson)…

As if punishing us all with Collateral Beauty wasn’t enough, writer Allan Loeb is back to irritate audiences once more with his latest script for The Space Between Us, in which he mixes the teen sentimentality of The Fault in Our Stars with the scientific space jargon of The Martian – and while this film is nowhere near as bad or as anger-inducing as Collateral Beauty, this is still a pretty dumb and hackneyed teen drama that feels just as contrived and nonsensical as anything else you’d expect from the writer of The Dilemma, Just Go With It, Rock of Ages, and So Undercover with Miley Cyrus.

The film begins its many contrivances by introducing us to a team of astronauts who have been selected to be the first in a program to colonise Mars, one of whom is revealed to be pregnant during the seven-month voyage across planets. Once on the red planet, she gives birth to a baby boy and dies shortly afterwards, making the baby – named Gardner – the first human born on another planet. Back on Earth, the project’s CEO who’s Gary Oldman (I know he has a name in the film, but let’s face it; he’s playing Gary Oldman if he were in charge at NASA) decides to keep the boy’s existence a secret from the rest of the world, which turns out to bite him on the backside when, sixteen years later, a teenage Gardner (Asa Butterfield) decides he wants to go to Earth and find his father, whose identity remains a closely-guarded mystery. He does, and somehow slips past NASA’s security to go out and find his Earth-based online-chat friend Tulsa (Britt Robertson), and from there it’s basically John Carpenter’s Starman if it were a teen romance and road trip movie.

The odd thing about The Space Between Us is that the overall premise of a human being born and raised on Mars actually isn’t that bad. There is dramatic potential in exploring what that would be like, for a young person to know nothing but the red desolate landscapes of the planet and the confined terraformed dome in which he must never venture out of, or else suffer the fatal consequences. Unfortunately, Loeb’s script is not at all concerned about these possibilities, and just goes in the direction of it being a rejected Nicholas Sparks romance with elements of a YA novel instead, being as hackneyed and schmaltzy as you can imagine. Aside from the ridiculous plot making little to no sense, it doesn’t really warrant much to differentiate it from, again, John Carpenter’s Starman which did this kind of plot with a lot more heart and less manufactured nature to it. Plus, when you have a lead character like Asa Butterfield’s Gardner who, aside from interacting strangely with people and normal things like a typical fish-out-of-water story, contains none of the charisma or gravitas that a story like this should have, he comes across more as being a whiny teenager than an actual smart kid, and the fact that we’re basically forced to be with this guy for a majority of the film can be testing. His chemistry with Robertson is okay, though a lot of the time it feels like they’re just ending up together because they are a boy and a girl, and God forbid there be a teen road trip movie where two members of the opposite sex DON’T end up romantically involved with each other.

As a teen-centric sci-fi tale, it doesn’t truly engage, because a lot of it is so nonsensical and contrived that only a hack screenwriter could come up with something this unrealistic, and since there isn’t a lot of time spent on Mars anyway it seems mostly pointless that the addition of this whole sci-fi plot is even there, because when you take away that aspect it’s entirely superfluous to the main romance plot. As a teen romance, it’s nothing that hasn’t been done before, only the cheese factor is amped up to Wensleydale levels during the corny dialogue that’s bound to have eyes rolling in full circular fashion. There’s far better examples of both teen sci-fi tales and teen romance stories out there, and because this film doesn’t really aim higher than the dumb script will let it, chances are that this will easily go in one ear and out the other without much of a fuss, quickly being forgotten and quietly ending up on the shelves at your local entertainment store. Until then, it’s not worth going to the cinema to see, because nothing will be gained by watching it, other than to see a wildly mediocre teen sci-fi/romance that will just as quickly disappear into fine obscurity.

It’s the kind of film that nobody will be talking about or even remember in a month or two, it’s that forgettable; and for a film that could have really explored its potential a bit more, The Space Between Us is just a big empty void of nothing.

The Space Between Us is a wildly mediocre and ultimately forgettable attempt to market towards the teen crowd, with neither its sci-fi nor romantic elements benefiting from a nonsensical script that could have taken its basic premise, that of a teenager being born and raised on a different planet, to much more interesting places, if it hadn’t gone for the hackneyed and contrived route it went with.