Space Jam: A New Legacy (Review) – A Slam-Dunk Of A Good Time 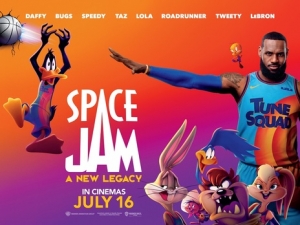 BASICALLY…: LeBron James (as himself) must team up with the Looney Tunes for a decisive game of basketball…

Everyone has that special movie from their childhood which stays with them forever, no matter how horribly dated or stupid it actually is. For me, that movie is Space Jam. I remember my four-year-old self’s mind being blown in the cinema by seeing basketball legend Michael Jordan share the court with none other than Bugs Bunny and the rest of the Looney Tunes, igniting my imagination about all the ways that real people like myself could interact with all these cartoon characters (keep in mind, this was well before I even knew Who Framed Roger Rabbit was a thing that existed beforehand). In the twenty-five years since then, I’ve watched it endless times, memorised almost every single bit of dialogue in every single scene, listened to the soundtrack repeatedly (which, by the way, still slaps after all these years, even with R. Kelly on the soundtrack), and gotten excited by any bit of news seemingly confirming a long-awaited sequel.

Here’s the thing, though: Space Jam is, subjectively speaking, a very, very silly movie. When you think of Michael Jordan and the Looney Tunes being in the same movie, you don’t imagine that it would revolve around aliens who want to enslave Bugs and the gang for their amusement park in outer space, and who go on to literally suck the talent out of other professional basketball players so that they can become the evil “Monstars”. You also don’t expect to see references to Pulp Fiction or Wayne Knight listing off several product placements in the same sentence within a film mainly intended for children, nor are you prepared for some creepily dated CGI of a flattened Knight being inflated to gargantuan size and left to delate like a gassy balloon. It’s also got a lot of hokey dialogue, awkward acting by athletes who, try as they might, aren’t professional actors, and a hilariously 90s attitude that makes it the perfect time capsule of that era. For a movie that started out as a series of Nike commercials starring Jordan and Bugs, it’s every bit the exact kind of corporate product you’d expect.

But I still love it, even with all of its obvious flaws. Sure, Space Jam is nothing more than corporate pandering, but everyone has known that since 1996, including – I suspect – the writers and filmmakers of Space Jam: A New Legacy, who also seem to recognise how dated and bizarre the movie is after all these years, but decided to not only embrace that but multiply it tenfold, for something which might be as subjectively imperfect as the original, but for general audiences and lifelong Space Jam fans like myself, it’s everything we wanted it to be and just a little bit more.

Space Jam: A New Legacy stars basketball star LeBron James as a fictional version of himself, who’s more than a little insensitive to his young son Dom (Cedric Joe) and his aspirations to become a video game programmer instead of a basketball player like his father. During a visit to the Warner Bros. studio lot, where he is pitched a revolutionary idea about being scanned by the studio’s AI, known as Al-G Rhythm (Don Cheadle), and transplanted into several movies – a pitch that the athlete rejects, stating that acting athletes “never goes well”, in one of many knowing jabs at itself – both LeBron and Dom are sucked into the Warner Bros. “Serververse” by an enraged Al-G, who holds Dom hostage and forces LeBron to form a squad for a game of basketball where, if they win, they get to go home. LeBron is dumped in the virtual 2D world of the Looney Tunes, which has been completely abandoned save for Bugs Bunny (voiced by Jeff Bergman), and together they travel through several Warner Bros. worlds, from DC to The Matrix, to reunite the rest of the Looney Tunes for the all-encompassing game, where the Tune Squad face off against Al-G’s “Goon Squad”, which are anthropomorphic versions of other basketball players like Klay Thompson and Nneka Ogwumike.

I really do admire how this is a sequel that firmly accepts its identity as an extended advert, with the product on display here being the entire Warner Bros. back catalogue. There are no false pretences about it, for the movie just blasts head-first into advertising mode as LeBron James and studio icon Bugs Bunny venture from one popular IP to another, all with that classic Looney Tunes chaotic style; you get to see Wile E. Coyote and the Road Runner in the world of Mad Max: Fury Road (an amazing sight, by the way), Yosemite Sam spliced into footage from Casablanca, and even Foghorn Leghorn riding a dragon from Game of Thrones, all of which is clear corporate pandering but when it’s as fun (and often very funny) to watch as it is, suddenly all sensible thought goes out the window. The Warner Bros. placements don’t stop there, for most of the crowd during the climactic basketball match are countless characters from the studio’s archive, from The Iron Giant to Pennywise all the way to Alex and the Droogs from A Clockwork Orange, who like the film’s actual audience look like they’re having the time of their lives watching everything. Again, it is excessive corporate overload, but it feels like the natural progression from how the first Space Jam was consumed by its own commercialisation, and it’s aware enough of its own stance as a feature-length advert to actually feel somewhat charming, because you can tell all their hearts and souls have been poured into something so entertaining that it’s honestly not that bad a commercial in the first place.

It really is an incredibly fun movie to watch, because you’re getting a lot of solid laughs out of the Looney Tunes humour and their hilarious interactions with other Warner Bros. property – one scene involving Taz’s re-introduction is so funny and so surprising that I dare not ruin it for you here – and because the plot and character arcs actually are rather endearing, with genuine stakes that not even the original Space Jam was able to have. LeBron James is clearly more comfortable in front of a camera than Michael Jordan (speaking of whom, there’s a great gag which, again, I really don’t want to spoil), and while he’s perhaps not the best athlete-turned-actor in the world he does still have screen presence, and a sense of charisma to carry himself through a lot of the strange stuff he encounters in this film. The main basketball game itself is like a plethora of visual wonders, for there’s so much stuff going on with the Warner Bros characters in the background that you’re almost distracted from the CG-upgraded designs of the Looney Tunes, while the game itself also counts styles of dunks as extra points which lends plenty of fun and clever moves on the court. Even as the movie heads to a heartfelt conclusion, you’re actually impressed that something so steeped in its own commercialisation can actually get away with having a good amount of heart to itself as well.

As for its flaws, you can discuss them until the cows come home – from some awkward dialogue and deliveries, to certain effects which do not look nearly as good as others – but honestly, who cares? I certainly don’t, because like the first Space Jam I can fully accept that this is not a perfect movie, perhaps steeped too much in corporate cynicism and excessive IP advertisement, but I can still very much enjoy it because it has an incredibly strong entertainment factor that never gets boring or overwhelming. It is honestly some of the most fun I’ve had since cinemas re-opened, even though I know there are other movies playing right now which are technically better and maybe more genuine than this. It doesn’t matter, though, because as much as my four-year-old self was loving every minute of the first Space Jam despite its problems, my twenty-eight year-old self had an absolute blast at Space Jam: A New Legacy, basketball-shaped warts and all.

Space Jam: A New Legacy is a ferociously entertaining sequel that will delight fans of the first film and charm other audiences with its self-aware approach towards its blatant commercialisation, which might be far from perfect but is fun and heartfelt enough to perform one hell of a slam-dunk.

Space Jam: A New Legacy is now showing in cinemas nationwide – click here to find a screening near you!