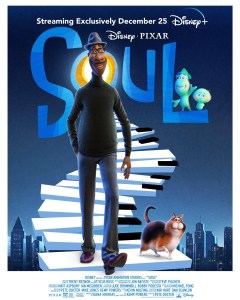 BASICALLY…: Joe Gardner (Foxx), an aspiring musician, finds his soul separated from his body and transported to an other-worldly realm…

This review is of the cut shown at the BFI London Film Festival in October 2020 – it is currently scheduled to debut on Disney+ on December 25th 2020.

With the recent news that Pixar’s latest film Soul is foregoing cinemas in favour of a Disney+ debut later this year, it’s yet another blow to exhibitors everywhere who are starved for new content that will bring confidence back to good old-fashioned moviegoing. While we’ll just have to wait until next year when (hopefully) things will get back on track, it’s still a shame that so many cinema-bound movies are taking the easy route to wide distribution during a time when the exhibition industry needs them to stay afloat, especially when some of them deserve to be seen on as big a screen as possible.

Soul, incidentally, belongs on a giant screen with powerful surround sound, as I can attest by being perhaps one of the few people in the world who will get to experience it in a cinema, where the full effect is profound and transportive; somehow, I don’t think that a 52-inch television in your living room will make it feel quite as other-worldly. Regardless, this is another high point in Pixar’s filmography, one which perhaps doesn’t have the same emotional weight as Up or Inside Out (both, funnily enough, directed by Pete Doctor who also helmed this film, alongside co-director Kemp Powers) but is still a visual and intellectual triumph.

We briefly open in New York, where middle-school music teacher Joe Gardner (voiced by Jamie Foxx) gets an opportunity to play for famed jazz musician Dorothea Williams (Angela Bassett), which in turn would fulfil a lifelong dream he has had to passionately play music for a living. However, after falling down a manhole, his soul is detached from his body and transported to a realm known as The Great Before, where souls are assigned personalities before being sent to Earth, and where Joe is partnered with a young soul named 22 (Tina Fey), who is wildly reluctant to go down to Earth since she has no passion for anything. Now, Joe must show 22 the joys of life if he is to return to his body in time for the gig of his dreams, during a journey where he himself opens up to how much of the world and its many wonders he has been missing.

The film has a surprisingly quick pace to it; no sooner have we been introduced to Gardner and his basic needs and desires do we transport to the meta-physical realm that Pixar once again personifies with alarming ease, all before the opening credits even show up. It goes along with how the promotional material really has kept a lot of this film’s surprises close to its chest, because there are turns in this movie which are not at all hinted at in any of the trailers, which is admirable in today’s spoiler-heavy desire to show just about every act in the two-minute-plus promo reel. The turns that it does take still make for a fun experience, even if some of it can feel slightly generic and similar to previous Pixar and Disney entries; without going into too much detail, a cat becomes a major character in a truly unexpected fashion, and the animators have clearly enjoyed playing around with certain human character inflictions too. Ultimately, where the story goes is sweet enough, with characters who you do sympathise with and enjoy spending time around, although it lacks the emotional gut-punch that made something like Inside Out a sheer masterpiece (it remains perhaps my personal favourite Pixar film). Hell, I’d even go so far as to say that Pixar’s other 2020 film Onward has a far greater emotional arc than Soul does, or at least one that lands much more satisfyingly.

The technical details, though, are where the movie blows many of its other competitors out of the water. The graphics in the New York-set sequences, from the most basic of character designs to the lighting reflected on buildings, is some of the most realistic-looking animation that Pixar has yet put out, with every street corner and each unique location looking as though they just planted CG characters into actual places, not unlike Disney’s Dinosaur. In the world of souls, things get a lot more artistically creative, from the minimalist abstract designs of elder figures tasked with overseeing the soul transitions (they’re mostly made up of lines that can morph into any desirable shape) to the ethereal electronic score by Trent Reznor and Atticus Ross, which contrasts nicely with the jazz-dominant New York score by Jon Batiste. No matter what realm the movie takes you to, whether it’s spiritual or physical, it’s always astonishing to look at, and perhaps even inspiring to any budding animators out there who see this and immediately become just as passionate about producing just as good animation, just as a young Gardner is during a scene where his older self’s soul sees the moment when he first listens to music.

Gorgeous to look at, even if the overall emotional impact isn’t quite as strong as one might be anticipating, Soul is certainly another strong addition to Pixar’s canon – which, once again, makes me a little sad that this isn’t going to be shown on as many screens as it probably should be. Hopefully, though, the lack of a true big-screen experience won’t put people off from seeing it, because however you end up watching it you’ll be entertained right down to the bottom of your soul.

Soul is one of Pixar’s most visually accomplished works to date, incorporating some stunning graphics and creative designs to deliver a true delight for the eyes, although while the plot and characters are sweet enough it doesn’t contain quite as big of an emotional punch as past Pixar films have managed to carry.