Sorry We Missed You (Review)

Sorry We Missed You (Review) 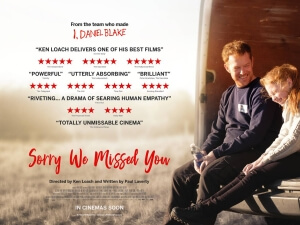 BASICALLY…: A family finds themselves in a rough situation when the father (Hitchen) accepts a zero-hour job as a delivery driver…

For decades, Ken Loach has always stuck up for the little guy, giving them a voice no other filmmaker would consider giving, and highlighting some very real issues across working-class Britain which need more attention than the media is otherwise giving them. As far back as his 60s TV docudramas such as Cathy Come Home, which tackled provocative issues at the time such as homelessness, and more recently as his 2016 film I, Daniel Blake which put the gross neglect of the welfare system in the spotlight, Loach has been the master of bringing up some rough truths through the power of devastating social cinema.

His latest film, Sorry We Missed You – which reunites Loach with I, Daniel Blake writer Paul Laverty – is another dive into the rough conditions people have been forced to live under due to economic and political hardships, and while it perhaps lacks a truly profound and subtle tone that I, Daniel Blake had, it is a bleak and rather devastating experience for anyone who has even been in a similar situation such as the one here.

The main character of the film is Ricky (Kris Hitchen), a Manchester native who’s since moved to Newcastle with his wife Abby (Debbie Honeywood) and their two children Seb (Rhys Stone) and Lisa Jane (Katie Proctor). Their dreams of owning their own home collapsed after the 2008 housing crisis, and they have been renting ever since, with both working zero-hour contracts in order to make ends meet. Things kick off when Ricky gets a job working as a delivery driver, working long shifts with tight deadlines with a van he must provide himself, which he gets by selling Abby’s car – which she needs to do her work as a carer, forcing her to take public transport instead – but while Ricky is lured by the illusion that he will effectively be self-employed under the franchise, the reality soon turns out to be anything but rosy with several financial burdens eating into everything the family has. To make matters worse, sulky teen Seb has begun acting out, getting caught graffitiing with some of his school friends, and constantly giving his parents crap for the unreasonable state the family is in.

Like some of Loach’s most powerful work, Sorry We Missed You is a movie that leaves you feeling both angry and sorrowful at the state of things, especially if you’ve been caught up in similar circumstances. I have worked a number of jobs with zero-hour contracts, from restaurant work to caring, and I can vouch for the fact that they absolutely suck all the balls; your life outside work is effectively put on hold because you can be called to work a shift at any time, and sometimes the employers don’t even care about other commitments you may have because all that concerns them is that you pull your own weight. What the film does so powerfully is show how truly ugly it can be to revolve your life so much around the job at hand, with Ricky becoming more and more trapped by the nature of his profession which in turn causes him to lose his cool when he is with his family. As he learns that the firm he works under is incredibly unsympathetic to his home life, even telling him that any day he takes off will result in a fine of £100 per day, Ricky’s frustrations begin to bubble up and soon the family unit that he and his wife have worked so hard to achieve is about to be torn apart because he can’t afford to make the time for them. It becomes even more devastating in a later scene where, even after suffering a horrific incident, this guy who’s already barely able to keep things afloat learns that he owes even more than he does. By the final scene, you are left so sucker-punched by emotion that it’s almost too much to bear, and for someone like me who’s been in similar situations like this it was all too real and equally devastating.

Loach and Laverty are clearly angry about the nature of zero-hour contracts, as should we all be, and they don’t hide their resentment in dialogue that might as well be spoken through a loudspeaker on top of a soapbox, which is where the film stumbles slightly in getting across its message in more subtle ways. While characters for the most part speak and act as though they’re not actually scripted or being directed – a common stylistic choice for Loach – there will be moments where the movie stops dead in its tracks to deliver dialogue highlighting the negative effects of the 2008 financial crisis and how other people have suffered in zero-hour contracts, which feels less like naturalistic dialogue and more like rejected campaign speeches for Jeremy Corbyn. When you look at a film like I, Daniel Blake, which also tackled a lot of issues such as poverty and welfare, it certainly didn’t shy away from how rough it could be for some people, but it was a film that carried itself better in terms of dialogue and characters, whereas here the characters and dialogue feel more like statements rather than anything truly believable.

Clearly, I didn’t think this movie was as effective as Loach’s previous film, but that isn’t to say that Sorry We Missed You doesn’t deserve attention in any way shape or form. It is an extremely powerful and devastating drama about some truly troubling real-life issues, with solid performances from a cast of mainly unknowns, and as always some solid direction by Loach. What it lacks in true subtlety, it makes up for with a serious sucker-punch of emotion.

Sorry We Missed You is a powerful and devastating drama that tackles the infuriating nature of zero-hour contracts and the effects they can have on people’s personal lives, even though it lacks the true subtlety of Ken Loach’s previous film I, Daniel Blake, with dialogue and characters that feel like political statements more than believable people and words.

Want to decide what the movie’s like for yourself?
Check out Sorry We Missed You showtimes in London
via