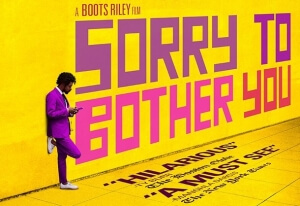 BASICALLY…: A young African-American telemarketer (Stanfield) begins using his “white voice” (Cross) to get ahead in business, only to get caught up in a conspiracy that soon sends things spinning out of control…

This review is of the cut shown at the BFI London Film Festival in October 2018 – the UK release date is currently listed for December 7th 2018.

The directorial debut of rapper and political activist Boots Riley really is quite something to behold.

Sorry to Bother You is a movie that not everyone is going to like – I can easily see this getting a pretty low audience approval score, similar to how Darren Aronofsky’s mother! did last year – because it goes to some very strange places and says and does things that some people will absolutely not be on board with, even those who were already warming up to the movie before it takes that turn. But no matter what you think about the movie, you cannot deny that it is simply fascinating; give it time, and this will easily become a cult classic in the near future, not just because of how ambitious and out-there some of its ideas are, but also because it’s a very funny and thoroughly enjoyable dark comedy with a unique and extremely original style to it.

Taking place in an alternate version of the present day, where the most popular TV show consists of people getting the shit kicked out of them – to a point to where the name of the show is literally I Got The Shit Kicked Out Of Me! – and what is effectively prison labour and lodging being advertised as a nice and efficient way of life, a young African-American gentleman named Cassius “Cash” Green (Lakeith Stanfield) gets a job as a telemarketer, which at first he struggles with until he is advised to use his “white voice” over the phone. Once he adopts his “white voice” – amusingly voiced by David Cross – he begins to make sale after sale, and soon makes his way up to a higher tier of the company, which contrasts with the mindset of his fellow co-workers who intend to strike for a union and better pay, as well as that of his artist girlfriend Detroit (Tessa Thompson) who becomes more and more active with the underground resistance to the large corporation overseeing everything.

It’s around this point when the film REALLY goes off the deep end, and I shall spare you any specific details because you seriously need to go into this movie as cold as you can (avoid the film’s Wikipedia synopsis like the plague), but just know that things are dialled up from 1 to 11 very fast, which I can see making or breaking the film for a lot of people. For me, I really enjoyed the ride it was taking me on; Riley has created a surreal environment that is at once cartoonish and also realistic enough for you to believe some of the things here could exist in the real world, which I honestly had a lot of fun watching unfold. There is definitely a satirical edge to his writing and direction here, from how a viral video can instantly destroy any credibility you may otherwise have, to how corporations have essentially crafted a monopoly that is quickly taking over life as we know it, which are all things that ring far too true even in our world but here it doesn’t seem to adopt a mean-spirited tone to go along with it; instead, it exaggerates all those things to create an odd movie world that’s about one step away from going completely Orwellian, and just has us laughing at the ridiculousness of it all while also having us recognise how real all of this could be at any given moment. It’s a very smart and well-written slice of social commentary, which also remembers that the audience needs to have as much fun watching it as possible, and Riley manages to accomplish that with only his first feature.

He’s got a style here that feels very unique and unpretentious, kind of like some of Spike Lee’s more out-there movies like Bamboozled, and equips it with one hell of a sense of humour that certainly had the audience I saw this with laughing hard constantly. He incorporates some very interesting editing and staging choices which evoke similar emotions, such as having a physical embodiment of Cash behind his desk being suddenly transported to the place where he is calling which just makes the awkwardness even more apparent, and practical transition shots that see TVs splitting in half to reveal a much nicer and bigger screen as he gets more and more successful which are pretty cool to look at and appreciated in an era where that and several other effects shots (again, without giving anything away) could have so easily been accomplished with CGI; thank God he went for things that look like they’re actually there, because they really are. The cast, too, are all really solid with some of them bringing a whole lot more to the table than was probably necessary; Lakeith Stanfield, an actor I’ve liked since first seeing him in Short Term 12, is a really good straight man who also gets some very funny moments to show how likeable a performer he is, while Tessa Thompson has a lot of fun moments to be a part of – just wait until you see her performance art – and Armie Hammer all but steals the movie in a small role as the head of the big corporation at the centre of everything.

This was a really fun movie to experience, and I can’t wait for people to see it for themselves just so I can see what they make of it, though I will bet right now that there are some who really can’t get behind how insane it gets. For my money, this was a ride you should bother with.

Sorry To Bother You marks an impressive debut by Boots Riley who presents a surreal but entertaining alternate reality in a smart and provocative script with stylish direction and plenty of laughs, though not everyone will like how insane it gets.