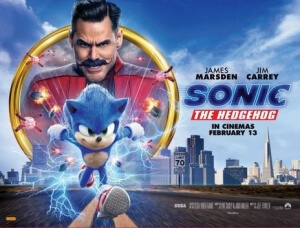 BASICALLY…: Sonic (Schwartz), a speedy anthropomorphic hedgehog, arrives on Earth where he must hide from the authorities, including the sinister Dr. Robotnik (Carrey)…

You have to hand it to the filmmakers behind Sonic the Hedgehog, because they are quick to admit they did wrong.

After that disastrous first trailer which featured, among many awkward things, a nightmarish new design of SEGA’s blue speedy mascot, Paramount and director Jeff Fowler took it upon themselves to bring it back in for a swift re-modelling (the only real damage being its moving from a Christmas release date to mid-February), resulting in a new-look Sonic that was not only closer to his original appearance, but was far more pleasing to the Internet’s eye. Regardless of what you may think of the movie, you have to admire the studio’s willingness to go back and correct a fundamental error in order to make its audience happy, and the fact that it seems to have made people excited for the movie again is a real testament to how people really do care about getting this character as right as they can.

Not being much of a Sonic guy myself – I’ve always been more into Mario and the world of Nintendo – I always felt that the movie could go either way with its overall quality. Fortunately enough, the movie is perfectly fine; there’s some good things to it, and some not-so-good things, but overall I think this is a harmless enough flick that children will probably enjoy more than adults, and there’s a few decent things for adults to admire too.

The story sees Sonic (voiced by Ben Schwartz) travelling from world to world in order to avoid everyone who wants to exploit his powerful speed for their own purposes; naturally, he ends up on Earth, in a small Montana town where he lives in solitude but also feels rather lonely. A chance encounter with the figure he calls “Donut Lord”, aka local cop Tom (James Marsden), sends the two of them on a road trip to San Francisco, during which they must avoid the authorities and, most of all, evil genius Dr. Robotnik (Jim Carrey) who is hellbent on capturing Sonic and harnessing his powers.

If your mind has immediately gone to the suppressed memories of previous live-action/CGI hybrids like Alvin and the Chipmunks, The Smurfs, and even Hop which also starred James Marsden opposite a CG creature, it should be comforting news to hear that Sonic the Hedgehog is not quite at that level. Granted, there’s plenty of instances where modern lingo and pop culture references are thrown into the mix like some sort of desperate plea to millennials, and as usual that stuff can be cringey at times (Sonic does the floss at least twice in this), but it’s never as low-brow or embarrassing as one of the chipmunks eating their own poop or Smurfs rapping into the camera. This movie has a little more respect for its young audience, not dumbing things down too much or relying on crude toilet humour for all its jokes, and instead emphasises a sense of fun and even a little heart, which does shine through when it works.

Though it’s not as bottom-of-the-barrel as Alvin and the Chipmunks, the humour is largely hit-and-miss. As the voice of Sonic, Ben Schwartz does give the character a youthful charm but the lines he’s been given to say – which, again, largely consist of pop culture references left and right – don’t always match his clear efforts. The same can be said about Jim Carrey as Dr. Robotnik, because while he is as over-the-top and goofy as always the material doesn’t always land – though he does get some of the film’s biggest chuckles, including a throwaway gag that I genuinely laughed out loud at. You can tell that these actors aren’t just phoning it in for an easy paycheque, but because the script just isn’t all that funny their efforts can’t help but feel slightly wasted.

But make no mistake, this movie is not awful; it’s far from even being bad. There are things about it which are fine, from the main characters being fairly likeable to some of the action scenes having a sense of creativity to them, and when there is a gag that lands it’s one that has both adults and children laughing a fair amount. It’s middle-of-the-road family entertainment, one that I don’t regret seeing in any capacity, but I have no burning desire to go back and revisit it any time soon; kids will enjoy it fine, nostalgic fans of the video game will find it amusing too, and for parents there isn’t too much offensive content for them to make a fuss over. In terms of movies based on video games, it’s definitely nowhere near the bottom pit where the likes of Mortal Kombat: Annihilation, Super Mario Bros: The Movie and at least half of Uwe Boll’s filmography dwell, but I would personally rank Pokémon: Detective Pikachu above this (though in fairness I have way more nostalgia for Pokémon than I do Sonic the Hedgehog), because that film took a few more chances than this one does.

It’s a safe family adventure that’s completely harmless, but not really memorable or funny enough to leave as long lasting an impact as that infamous first trailer. Props to the filmmakers for having the balls to go back and completely redesign Sonic after all that backlash, but it still doesn’t rank the movie any higher than simply “okay”. It doesn’t quite charge ahead at full speed, but it is more than content with just being on cruise control for the whole journey, and that’s perfectly fine.

Sonic the Hedgehog is a decent enough family flick that children will enjoy perhaps more than parents, who might be a little put off by its hit-and-miss humour and its overly safe attitude, but there is a fair amount of heart and some fun action to keep your attention span going at a reasonable speed.

Want to decide what the movie’s like for yourself?
Check out Sonic the Hedgehog showtimes in London
via