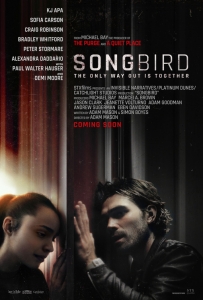 BASICALLY…: In 2024 Los Angeles, the COVID virus continues to rampage and disrupt civilian life – but that won’t stop young immune courier Nico (Apa) from developing a relationship in lockdown…

Believe it or not, Songbird is not the first film of 2020 to take gross advantage of the COVID-inspired new world order. This year has seen the release of extremely low-budget exploitations films such as Corona Zombies and Angry Asian Murder Hornets (and yes, these are all real movies), which were shot very quickly during lockdown, often reusing older footage from other movies like Bruno Mattei’s Hell of the Living Dead which were then dubbed over, and then quietly dumped onto digital platforms.

The difference between those movies and Songbird, though, is that they at least had the decency of being released with almost zero fanfare. This, on the other hand, is a Michael Bay-produced dystopian thriller with a much starrier cast and higher production values, so no matter what it was always going to receive publicity – which immediately makes it a far more despicable product than even Angry Asian Murder Hornets.

The plot of this tasteless, exploitative, fear-mongering trash sees the world – or at least, the entirety of Los Angeles – completely devastated by the mutated COVID virus. Now called COVID-23, it’s forced the entire city into indefinite lockdown, and the construction of “Q-zones” where sick people are transported to and never heard from again. The only people allowed out and about are those who are immune, including courier Nico (KJ Apa) who works for a delivery service run by Craig Robinson (I know his character has a name, but so many of these people are forgettable enough that I’m going to just refer to some of them by actor from now on). Nico is in a virtual relationship with a young woman named Sarah (Sofia Carson), the two star-crossed lovers exclusively communicating over FaceTime, but when Sarah’s grandmother suddenly comes down with the virus, Nico races to save her from being transported to what is effectively a concentration camp of COVID patients.

That’s not even factoring in a high number of unnecessary sub-plots and supporting characters, including rich couple Demi Moore and Bradley Whitford running a criminal scheme of fake immunity passes, online singer Alexandra Daddario communicating with war veteran Paul Walter Hauser (and having a sexual affair with a possessive Whitford), and most cartoonishly of all Peter Stormare as the evil-for-no-reason Sanitation Department head who’s charged with taking the infected people away. These characters are so badly written that their motivations often make very little sense and don’t match up at all with their established one-note personas, and even the acting from most of them – particularly a flat and disinterested Demi Moore – isn’t good enough to carry any of their scenes, leaving you to wonder why such recognisable actors, who have all been in far better movies, actually agreed to be in something like this.

Actually, it isn’t that hard to figure out. Most likely, they signed on because they were bored of being in lockdown and wanted to get some work done while this pandemic plays out; after all, as the first film to shoot in Los Angeles since the restrictions were put in place, it was a local job that meant they didn’t have to travel so far away from their own homes, and thus not risk spreading the virus any further. In that case, fair enough; work is work, no matter how gruelling. But did they stop to consider that maybe, just maybe, the project they signed on to do was one that absolutely nobody in the world wants to see in the middle of a global pandemic? You can throw in Alexandra Daddario’s captivating eyes, but you cannot expect then to disguise how thoroughly misguided this entire concept is.

Even without the nasty timeliness, though, this movie is just a rotten turd all the way through. Michael Bay did not direct this movie – that role instead goes to Adam Mason – but this looks and feels very much like one of his movies, right down to the ugly colour saturation and headache-inducing camera work that always seems to accompany them (even its lead character is an obnoxious but heavily ripped douchebag that gives Sam Witwicky a run for his whiny money). The editing in this movie is some of the worst you’ll see this year, cutting so frequently back and forth in action scenes or even when it’s just two people talking that it easily become numbing to endure. You can very much tell that this was a rushed production, because there are certain noticeable holes in the narrative that have failed to fill thanks to scenes and characters that are entirely missing (Nico is at one point saved by a random guy who they’re setting up to be a major new presence, but then he’s just gone from the rest of the movie). The writing is terrible, the acting is either very flat or heavily over-the-top (neither are convincing), and the filmmaking is just bottom-of-the-barrel incompetence; no style, no substance, all unbearable.

It’s exactly what you’d think it is: a tasteless exploitation flick made for nobody in a year where not a single soul would even dream of checking out. It’s awful in all the same ways that 2020 has been awful, only the year did at least have a couple of bright spots.

Songbird is an ill-judged, tasteless and dangerously exploitative dystopian thriller that plays on certain fears surrounding the current COVID-19 pandemic, but beyond the misguided timeliness of its plot, it’s a horribly made, terribly acted and mind-numbingly lazy movie that nobody should have the common sense to watch, even out of curiosity.

Songbird is out now on digital and in cinemas across the UK.