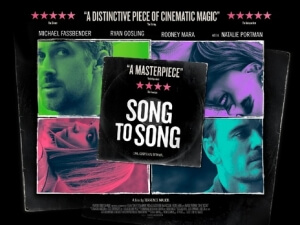 BASICALLY…: Erm… you’re guess is as good as mine…

What can one say about Terrence Malick’s Song to Song? No, seriously; what CAN one say about it, because I’m not convinced that the film even has a clue as to what the hell it’s about.

Malick’s films, especially the ones he’s made more recently, have been both praised and derided for their experimental approach, using surreal cinematography and A-list actors wandering about aimlessly while via voiceover whispering some pseudo-philosophical nonsense. It’s won him acclaim at times, namely for his Oscar-nominated The Thin Red Line and The Tree of Life, but other times it’s given the filmmaker an unwanted reputation for making films that think they’re way deeper and more intelligent than they actually are. The last couple of films he’s made, To The Wonder and last year’s Knight of Cups, have especially earned him this new reputation, and now you can add Song to Song to that list, a film which thinks it’s saying everything but instead it’s just a whole bunch of nothing.

What’s the story? There isn’t one – like a lot of Malick’s films, it thinks it can rely on pure visual poetry alone to tell a coherent story with dimensional characters, instead of actually taking the time to develop said story and characters, both of which are virtually non-existent here as a result. The best that I can come up with after having seen it is that there’s Rooney Mara, who’s a singer or a musician or something, and she meets Ryan Gosling at a party and they hit it off, but she’s somehow also involved with Michael Fassbender who’s a music producer, and who in turn is also involved with a waitress who’s Natalie Portman, and it’s this kind of weird love triangle between Mara, Gosling and Fassbender for a while, and it takes place at a number of music festivals, and then Cate Blanchett pops up for a little bit… see how I’m struggling to even make this sound like a coherent narrative? That’s because this film gives me nothing to work with in this review, because it’s so disjointed and fragmented that I legitimately said out loud in the middle of the screening, “What the hell is going on?!”; I even had to ask one or two fellow audience members what it was all about, and they couldn’t give me a straight answer either. Nobody, not even the film itself apparently, could figure out what Song to Song is trying to say.

Now, before all the Malick fans get all het up and cross simply because “I didn’t get it” and “I just don’t understand what he’s saying”, I knew what kind of style I was expecting going in. I have seen a couple of Malick’s films before, for instance I watched The Thin Red Line during a university course, and I saw The Tree of Life in the cinema, so I wasn’t unfamiliar with his particular style and his grandiose approach to the visual medium. However, even those films at least had some semblance of an idea of a narrative and characters, which this film does not have in any way shape or form (and, from what I hear, neither did Knight of Cups, which was shot at the same time as this). The fact that I referred to the characters as the people who were playing them should tell you all you need to know about their actual identity as “characters”; when people start talking about someone called Faye, I sat there thinking “Who the hell is Faye?!” and it wasn’t until looking up this film’s IMDb page that it was the name of Rooney Mara’s character, because until then I was convinced that these people were just playing themselves, and they might as well be since Malick doesn’t care to actually have us get to know them or anything.

Instead, Malick is fiercely determined to shove as much beautiful imagery down your throat as much as he physically can, and then a little bit extra, and while Emmanuel Lubezki’s cinematography is indeed lovely, downright inspired at times, there’s only so much visual prowess one can take in a film that relies solely on its good looks. The number of scenes with people just lying in bed laughing and messing around are insane, as are the amount of times it will cut away suddenly to something completely unrelated or not even in the same timeline, and don’t even ask how many times this movie uses whispery voiceovers spouting all that philosophical crap you would find in a secondary school student’s notebook; there’s more voiceover in this film than there are lines of on-screen dialogue, which I’ve come to expect in a Malick film by now but I had forgotten how frustrating and repetitive a lot of it can be.

It is mostly, however, extremely and utterly boring; because there is no concrete plot or any characters you can latch yourselves onto, you’re left just watching a loosely stitched-together collection of scenes of handsome people wandering in front of an extremely beautiful camera lens, and even that gets old after a short while. By the time the film reaches the hour-and-a-half point, you’re just begging for it to end, but the film continues for another half an hour at least even when all possible narratives – and believe me, that’s a very light use of the term – are wrapped up. Finally, when it does, you’re left confused, half-asleep, and extremely frustrated that you just wasted your time watching this vapid, empty BS.

I’m not going to lie, this was a very, very, VERY hard film to sit through, not just because it was a whole bunch of nothing on the screen for two hours except for some pretentious pseudo-philosophical bollocks, but because there was the agonising thought I was having while watching it that no matter what, I had to write a review on this thing. For something as empty and hollow as Song to Song, I think I’ve done okay; at least something fully developed came out of this crap.

Song to Song is an excruciatingly painful sit due to its complete and utter lack of narrative and dimensional characters, and its total reliance on its admittedly pretty cinematography (which even then gets old after a while) and a whole bunch of pretentious pseudo-philosophical nonsense that the film thinks is far deeper than it really is. One of the year’s worst.