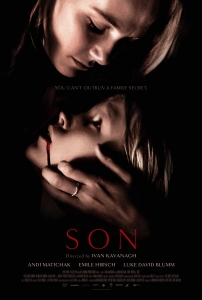 BASICALLY…: A single mother (Matichak) must decide how far she would go to protect her young son (Blumm)…

Shudder may have missed a trick by not releasing their latest original film Son around Mother’s Day. Aside from it being specifically about a mother and child relationship, the film – written and directed by Irish filmmaker Ivan Kavanagh – also has a couple of interesting points to make about how far someone would go to keep their child from harm, in the process showing a rather extreme case of motherly protection that, let’s face it, is the least that most of our mothers could do for us.

However, regardless of whenever it becomes available, the movie is a mixed assortment of twisted and bloody paternal drama, but also familiar plot points and predictable directions.

We follow young mother Laura (Andi Matichak) when she’s just escaped from a mysterious cult, with a baby boy in her uterus. Eight years on, she and her son David (Luke David Blumm) seem to be living a comfortable and happy life together, but one night Laura sees members of her former congregation inside David’s room, in the midst of what looks like a ritual. Shortly after, David develops a strange illness where large scabs appear around his body, and even more disturbingly he starts to crave human flesh; convinced that it links to her troubled past with the cult, Laura takes David from the hospital and goes on the run from the concerned authorities, among them local detective Pete (Emile Hirsch) who has developed a personal connection with the two of them. Unfortunately, as she struggles to keep her son’s dangerous new habits at bay, she must consider exactly how far she’ll go in order to protect him from harm, especially when it becomes more and more clear what Laura’s past, and by extension David’s newly inherited skills, consists of.

There are some things to appreciate about Son, one of which being that it wisely avoids being just another jump-scare horror movie (except for one or two instances which don’t fit the tone of the rest of the movie) and lets a number of its characters actually seem like people on several occasions. There are several scenes between mother and son where you see and understand their firm connection, not just because they’re written to be rather likeable from the first act onwards, but because the performances of both Andi Matichak and Luke David Blumm are strong enough to make you buy that these two really do care for each other in their own unique ways. Ivan Kavanagh’s script also tackles some interesting scenarios when she decides to satisfy her boy’s unusual new appetite; during one extended sequence, she seduces a violent pimp at a seedy motel before letting her ravenous son take things from there, and it’s a testament to Kavanagh’s writing and direction, as well as his reliance on gory practical effects, that it leaves you both icky from the violence that follows, and also increasingly curious about how this deadly new tag-team method of devouring people is going to pan out.

While it has some intriguing moments and good performances, the movie ultimately falters when it tries to dive deeper into its own lore. All its talk about satanic cults, troubled mother-son relationships and the true identity of the poor boy’s real father is all stuff that has been explored elsewhere, whether it’s Rosemary’s Baby or The Babadook, which does make some of its twists – such as the possibility that Matichak’s Laura may just be crazy and imagining everything – a little easy to figure out. There are also long stretches in this movie where it feels like there’s nothing all that attention-grabbing, particularly when it cuts back to Emile Hirsch’s detective character trying to piece everything together; it’s one thing to adopt a slow-burn approach like this movie does, but there needs to be a few more things on display to hold our attention through the much slower parts, and unfortunately it doesn’t reach far enough for the viewer to become fully invested, aside from those occasional sections where it actually does feel like it has a point. It particularly loses its way during the closing few minutes of the movie, which attempt to wrap things up in ways that don’t make a lot of sense, and feel like it’s being revealed now just for the sake of there being a twist ending.

It’s a movie that is what it is, one that’s certainly watchable but also not especially memorable either. You can find a whole array of movies with similar plots to this that are just more interesting and hold your attention a lot more, although if you’ve already exhausted those options then this one wouldn’t hurt to put on one evening; just don’t expect to find it as deep, scary or ambitious as a lot of the others.

Son is a watchable but ultimately forgettable mother-son horror-thriller which, despite some interesting turns in Ivan Kavanagh’s script and direction, as well as some decent performances, ultimately doesn’t stretch itself far enough beyond a bunch of familiar tropes and predictable twists that prevent it from being fully engrossing.

Son is now available to stream on Shudder.