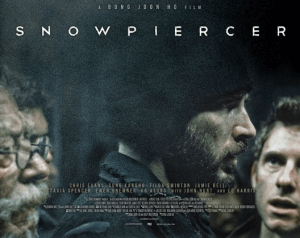 BASICALLY…: A class war erupts on a train transporting the world’s remaining population after the planet has been frozen following a failed climate-change experiment…

Parasite isn’t the only film by Bong Joon-ho you should be rushing out to see right now. From Memories of Murder to The Host to Okja, there’s a stellar line-up from the Oscar-winning South Korean filmmaker that is worth discovering in the wake of Parasite’s historical success at the Academy Awards.

But there is one that by far has the most fascinating history, at least in terms of its actual release. Originally, Bong Joon-ho’s English-language debut Snowpiercer was picked up for a major theatrical distribution that would have seen it get a wide release in 2014 across the United States, the UK, and the rest of the world. The only problem? It was picked by The Weinstein Company, who demanded that the filmmaker cut 20 minutes from the film, as well as add additional narration to bookend the film. When he refused, the Weinsteins effectively buried the film, scoring only a limited release in the States and to date has never received an official UK release, aside from unceremonious appearances on both Netflix and Amazon Prime Video.

For this reason alone, Harvey Weinstein needs to be found guilty and put away for life (in addition to his current charges, of course), because he had a hand in screwing an exceptionally talented filmmaker over bad, and prevented the world from being easily able to access one of the most brutal, vicious, and downright inspiring sci-fi films to emerge from the last decade.

The plot takes place sometime in the near future, when an attempt to stop global warming in its tracks backfires when it throws the planet into a new ice age. The only survivors are a group of passengers on board a train that circles the globe all year round, but in the 17 years since everything happened things have aggressively gone downhill; the passengers at the tail-end of the train are treated like low-class citizens, kept in line by soldiers from further up the train and fed black gooey protein bars on a daily basis. Needless to say, conditions are pretty dire, so much so that it inspires a man named Curtis (Chris Evans) to lead a revolt, and soon he and a number of fellow rebels make their way up the higher-class levels of the train, all the way to its reclusive founder and head honcho, a guy named Wilford (Ed Harris).

I had only heard good things about this movie for years, but upon finally seeing it even I found myself so shocked by the level of imagination and gruesome action on display here. The action in this movie can only be described as glorious carnage, with such raw violence waiting behind nearly every carriage door, whether it’s an army of masked soldiers brandishing axes or seemingly indestructible henchmen hell-bent on killing every single person that gets in their way. It’s mesmerising stuff, because Bong Joon-ho films it all as though it is an arthouse film, incorporating slow-motion and even night vision to emphasise the thrills, but not once does it come across as pretentious or full of itself, and instead feels fresh and a lot more stylish than a lot of mainstream action movies that came out years after this one did. It’s also got a wickedly dark sense of humour; for instance, a giant fight scene will be underway, with people getting butchered left and right, only for everything to stop just so the passengers can celebrate the New Year. And just wait until you stumble into a classroom where a crazy Alison Pill is teaching her young students all about the wonders of the engine and its infallible founder.

The action and humour is on point, as is the acting – made up of recognisable faces from Chris Evans to Jamie Bell to Tilda Swinton to the late, great John Hurt – but what’s most impressive about the whole thing is the sheer amount of thought and creativity that went into creating this strange, disturbing world. The set and costume designs are like something out of a Terry Gilliam film – in fact, as a likely nod to the filmmaker, one of the key characters is named Gilliam – crossed with The Hunger Games, and it’s so visually impressive that you want to know a hell of a lot more about how this whole train works and operates, beyond the mere glimpses we get to see here. Clearly there was a lot of love and passion put into designing each and every corner of this film, and how it looks will want anyone to make a movie with similar levels of imagination, because Bong Joon-ho makes it all look so effortless.

This is a film that absolutely should be seen, especially by anyone who likes a brutal, creative and awe-inspiring sci-fi action flick. Unfortunately, because of everything the Weinsteins did to try and bury the film, the only way to see it is to either find it on streaming services or order the DVD or Blu-Ray from a different country. It really infuriates me that this decade alone, two great sci-fi films – this and Annihilation – fell victim to petty squabbles between filmmakers and producers, because they both deserve to have far wider audiences than they got. With Snowpiercer in particular, at least Bong Joon-ho is now having the last laugh – his filmography is shining more than the Weinsteins ever will from now on, and thanks to Parasite’s enormous success maybe it will finally get the large audience it deserves.

Snowpiercer is a brutal, vicious and endlessly creative sci-fi action flick from Bong Joon-ho that is inspiring from both a filmmaking and storytelling perspective, as well as massively entertaining from start to finish. Try and seek it out wherever you can; it deserves far more of an audience than it originally got, no thanks to the Weinsteins.

Want to decide what the movie’s like for yourself?
Check out Snowpiercer showtimes in London
via