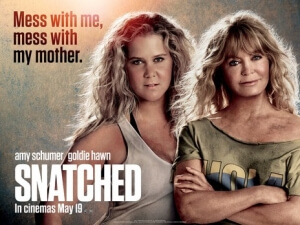 BASICALLY…: After Emily (Schumer) breaks up with her boyfriend, she and her mother Linda (Hawn) head off on a holiday that soon goes south – and that’s before they’re even kidnapped…

The backlash against comedienne Amy Schumer seems to have come out of nowhere; after a short while of riding a high with her hit sketch show Inside Amy Schumer and a celebrated lead role in Judd Apatow’s Trainwreck, all of a sudden she became one of the most hated figures by trolls on the internet, with even the very mention of her name causing outrage in comment sections everywhere. Even the trailer for her newest film Snatched is rather unbalanced with its YouTube like/dislike ratio (guess which one outweighs the other), which means either people STILL haven’t learned their lesson from last year’s Ghostbusters and are still bitching about female-led comedies becoming more of a thing (which is likely, seeing how next month’s Rough Night is also getting a large amount of dislikes for no real reason), or that the film is legitimately terrible, no matter who was headlining it.

To address the latter first, Snatched is not terrible; it’s not great, but there are enough good moments of amusement to keep it from being truly bad. Of course there are some major flaws with it, but again like with Ghostbusters I have to stand here and tell the Internet once again that they’ve been overreacting to something that’s (mostly) undeserving of the hate.

In the film, Schumer is Emily who, after being fired from her job and then dumped by her boyfriend before their non-refundable trip to Ecuador, decides to bring along her cautious mother Linda (Goldie Hawn, in her first film role since 2002’s The Banger Sisters) on the trip so she can enjoy it regardless. Unfortunately, events lead to the both of them being kidnapped and taken to Colombia, where they are initially held for ransom before they escape and must survive the harsh wilderness – and also each other – if they’re to make it to the US embassy in Bogotá.

On the surface, it’s another one of these silly comedies about two mismatched individuals forced together on a journey through challenging environments, and while Snatched doesn’t add a whole lot to it there are some solid laughs and gags sprinkled throughout it to make this a mostly harmless sit. Writer Katie Dippold, who also wrote The Heat in addition to last year’s Ghostbusters, and director Jonathan Levine – who with this makes a much more surprising U-turn into full-blown comedy after less riotous affair like 50/50 and Warm Bodies – manage to create a comedic atmosphere that isn’t necessarily fresh or even hugely funny, but there are moments where their comedic timing – as well as that of their actors, including Schumer and Hawn as the lead duo – really pays off and makes even some of the lamer jokes still seem funny. Schumer is a naturally talented comedic actress, as is Hawn who here feels like she never went into semi-retirement fifteen years ago, so both are just having a blast with the material even when it tends to undermine their genuine screen presence at times. Supporting players like Ike Barinholtz, Joan Cusack, Wanda Sykes and Christopher Meloni all tread carefully along the line of being overly obnoxious (Barinholtz, as Schumer’s agoraphobic dork of a brother, is mostly guilty of this) and being genuine scene-stealers (Cusack, who doesn’t even have a line of dialogue as she’s a former special ops agent with her tongue cut out, is absolutely hilarious in parts), and they complement the passable nature of the overall story rather nicely.

However, for every joke that just about lands, there are a few that seem to miss the mark. When they come around, they tend to be either really unnecessary to the overall plot, like an extended gross-out gag about a tapeworm, or just not as funny as it was probably conceived to be. When that does happen, it can deflate the film’s hot streak and make it a bit more by-the-numbers even for a silly comedy like this, but luckily there were just about enough laughs to prevent it from being the disaster many trolls were probably wishing for it to be.

So yeah, I have no idea why everyone’s just suddenly turned against Amy Schumer all of a sudden, but as long as she keeps her head afloat, even in amusing comedies like Snatched, I think she’ll be able to emerge from all the unearned hate just fine.

Snatched is an amusing comedy that relies well on the talents of lead actresses Amy Schumer and Goldie Hawn as well as others working behind or in front of the camera, even if the overall plot doesn’t add much that’s new to a silly wilderness film like this.