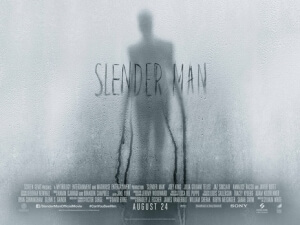 BASICALLY…: A group of teenage girls investigate the presence of a mysterious figure known as the Slender Man, only to be haunted by the man himself…

I’m really starting to run out of things to say about Sony Pictures being completely useless as a movie studio, but they just keep finding more and more ways to astound me with how badly they can screw up, from their absolutely rubbish marketing department that hindered films like Baby Driver, Jumanji: Welcome to the Jungle, Peter Rabbit and most recently Alpha, to the overall low quality of a large percentage of their movies thanks to behind-the-scenes meddling and misguided ideas for films.

It should come as no surprise whatsoever that the newest horror movie to come from the studio – based on the popular online Creepypasta myth of the tall, lanky and faceless creature known as Slender Man – is another giant turd to go along with all the other turds they’ve put out, with the biggest scare coming from the entire thing being the thought of how much longer you’ll have to sit there enduring all this utter tripe.

This is the kind of film that can be summed up very quickly; a group of teenage girls (Joey King, Julia Goldani Telles, Jaz Sinclair and Annalise Basso) summon Slender Man after watching an online video, and the creature just spends the next ninety minutes just screwing with them.  That’s the whole plot to this movie, and if you think that means a fairly quick sit then you’ll be sorely mistaken; even at just over an hour and a half, this movie feels so much longer because it’s completely padded out with useless characters, plot contrivances, and not a single solitary scare to be found anywhere.

I don’t know much about Slender Man as a concept, and I don’t think the filmmakers or the studio do either; the way that this monster is constructed, other than being completely unscary and not even that intimidating, is extremely vague and frustratingly unexplained, like they only saw what he looked like and did no further research into his backstory or what he even does to people, leaving the writers to make some bollocks up and just put Slender Man in there because he’s a thing people used to talk about on the internet.  I’m willing to bet that Slender Man as depicted in this film is nothing like what most people on the internet describe him as, because there’s no way he would have caught on with the online zeitgeist in the first place if this is how he was originally imagined to be. I get the impression that most young people who go to see this movie because they know of the character will be extremely disappointed, as this is not a film made for anyone with a brain in their head; rather, this is a movie made for people who hate horror movies because they make them feel scared like they’re supposed to, so lo and behold the geniuses at Sony have constructed a movie that nobody in their right frame of mind would find even the least bit frightening.

Instead, it’s incredibly boring to watch, with about as much entertainment value as being stuck behind the slowest person by the checkout at the supermarket. It’s not at all scary, producing more yawns than screams at every given opportunity (seriously, you should have been there at my screening: complete stone-cold silence, and it was a pretty packed screen); the characters are barely characters at all, especially these four main girls who might as well be blended together due to their total failure to differentiate from one another; you don’t care whatsoever about the thin plot they’re all working with; and it’s shot and edited so poorly you can almost feel the contempt from the director, cinematographer and editor from every angle of the project they were working on. There is just absolutely nothing to this movie; nothing to recommend, nothing to redeem itself, not even anything to justify seeing it in a cinema. This movie is a complete and utter waste of time and effort by everyone involved, even the actors who I’ve seen in better movies and honestly try their best here, but they have absolutely zero material to work with. This is a movie that nobody should seek out to see, unless they want to actively seek out what is easily one of the worst horror movies this year.

As bad as the movie is, though, a lot of the blame for its horrendousness can once again be traced back to Sony Pictures, especially when you read about the film’s rather troubled backstory. According to a recent tell-all article on horror movie website Bloody Disgusting – which you can read in full here – the script was originally reworked to appeal more to a teenage audience (a common Hollywood practice for most horrors nowadays), but when the first trailer seemed to imply it would in some way mirror a real-life incident of two teenage girls stabbing their friend after being supposedly influenced by Slender Man, fear of a backlash prompted Sony to try and shop the movie around to other studios. When that proved unsuccessful, they decided to heavily re-edit the film to remove some of the more intense scenes that were glimpsed at in the trailer, including one where a character stabs their eyes out, and then released that version into cinemas.

So, not only is the movie a complete and utter disaster, it’s a disaster that was entirely of the studio’s making. Who’s to say whether the original version was any better, but how it is right now this movie is a colossal embarrassment for a studio largely made up of nothing but embarassments. I’m not even going to waste a “Goddammit, Sony!” on this film, because it deserves nothing but contempt and humiliation from everyone who goes to see it.

Slender Man has no business being on anybody’s screens, let alone being the boring, useless and exhaustingly unscary attempt at horror that it’s falsely claiming to be. Don’t bother seeing this utter crap in any capacity.