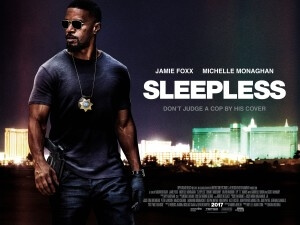 BASICALLY…: In Las Vegas, dirty cop Vincent Downs (Foxx) must comply with the gangsters he stole drugs from if he is to save his teenage son…

Jamie Foxx: action hero? The idea of the Academy Award-winning actor headlining an action film has been passed around before with lead roles in The Kingdom, White House Down, Stealth and Django Unchained, but with the exception of maybe Django he’s yet to have seriously convinced audiences that he has what it takes to follow in the footsteps of Stallone, Willis, Statham and other certified leads in the genre.

But if you think that Sleepless is finally going to be the one to give him the credentials needed to make him a genuine action movie star, then prepare to keep waiting, as this is an entirely disposable thriller with momentary action beats that is best enjoyed in the moment, but will certainly not stick long in the mind afterwards.

A remake of the highly-acclaimed French thriller Sleepless Night, Foxx stars as crooked Las Vegas cop Vincent Downs, who we first see robbing a drug courier with his partner (T.I.), and stealing a large shipment of cocaine. This, of course, incurs the wrath of casino owner Stanley Rubino (Dermot Mulroney) and mobster Rob Novak (Scoot McNairy), who swiftly kidnap Vincent’s teenage son Thomas (Octavius J. Johnson) and force him to return the stolen shipment to them. That in and of itself would be easy, if it weren’t for ruthless Internal Affairs agents Bryant (Michelle Monaghan) and Dennison (David Harbour) closing in on Vincent’s dodgy dealings, who also end up complicating matters even further.

It’s the kind of trashy action-thriller you would expect it to be, one that’s short on meaningful plot and characters but heavy on gun-heavy violence and bombastic fight choreography. Swiss director Baran bo Odar makes his English-language debut with this film after directing a couple of German thrillers, and he fares okay with adapting the source material into a much more Americanized version, with the action set pieces doing a serviceable if unremarkable job at delivering the typical beats we’ve all come to expect by now. However, it’s the script, written by Oscar-nominated Straight Outta Compton writer Andrea Berloff, that fails to fully transcend clichés with twists you can see coming miles away, plot points that really don’t make much sense and only exist just to make the film longer than it needs to be, and moments of violence that feel more sadistic than entertaining at times. As for Foxx, he does all that he can with the material, giving a surprisingly committed performance that easily makes him watchable as well as a believable lead that you can easily see as being possibly corrupt.

But in the end, it all comes down to pretty much nothing, as there is hardly anything about this film that really makes it stand out or even remotely memorable. You’ve seen this kind of crime action-thriller with these types of characters and settings before and done much better, leaving this one with virtually no chance of being remembered much further down the line, and more than likely buried underneath the much better examples of this type of genre. This is a completely disposable, dumb crime thriller that’s more of a chore to watch than it is actual entertainment, one that treats major wounds as though they’re mere scratches – Foxx spends most of the film with a stab wound in his abdomen, yet still manages to perform all sorts of crazy stunts in fight scenes without hardly stopping and clutching his body in pain, except for instances where he’s just walking normally – and makes less and less sense as the film goes on, with certain character revelations bordering on self-parody at times.

While it’s not worth recommending watching in a cinema, it’s not nearly bad enough to say that you should skip it entirely. If you’re looking for a completely disposable action-thriller that’s best enjoyed in the moment but will leave little to no impact on you afterwards, then Sleepless is probably your best bet on a relaxed evening in front of Netflix. Anything else would probably be a waste of your hard-earned time.

Sleepless is a throwaway action-thriller that leaves little to no impact on you as soon as you leave the cinema, and is probably best suited for an evening in front of Netflix instead of an actual theatrical experience, something that not even star Jamie Foxx can alter despite a decent and surprisingly committed performance from him, although even then he has to work with so-so direction and a nonsensical and clichéd script.