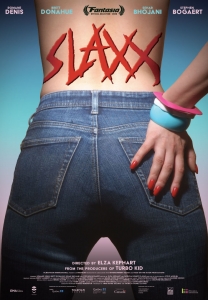 BASICALLY…: A possessed pair of jeans begins to terrorise and kill the staff of a trendy clothing store…

Killer fashion was most previously brought to life in Peter Strickland’s satirical horror In Fabric, but Slaxx – which has now launched on horror streamer Shudder – takes the heightened concept to whole new levels of insanity and silliness, but with a completely different sense of direction.

Whereas Strickland’s film – about a killer dress that subtly claims the lives of those who happen to try it on – opted for a darker, artsier approach with tons of surreal imagery that threw back to the style of Dario Argento, Slaxx does not even pretend to be anything grander than its wildly bonkers plot suggests, aiming instead for a much more over-the-top comedy-horror where every performance, every line of dialogue and every creative death is akin to a low-brow exploitative B-movie from the 1980s. This approach, arguably, makes it by far the more entertaining of the two, even if this movie sometimes doesn’t fit quite as well as it should.

Taking place primarily at a super-trendy clothing store called Canadian Cotton Clothes, we are quickly introduced to the unbearably hipster and image-obsessed staff, including fresh newcomer Libby (Romane Denis) who, unlike everyone else, is ecstatic about finally getting to work for the clothing chain. On this particular night, Libby and the rest of the staff – all overseen by uptight manager Craig (Brett Donahue) – are on store lockdown so that they can prepare for the launch of an anticipated new line of jeans that have been designed to automatically adjust to anyone’s body size. Unfortunately, one pair of jeans reveals itself to be alive, and starts killing anybody who tries them on, leaving the surviving staff to try and figure out a way to survive the night without falling victim to these killer jeans.

If you think that this movie sounds completely ridiculous, then you’re right. Luckily, Slaxx also well and truly knows that it’s an exceptionally daft premise, and takes as much advantage as it can of how ludicrous something like the concept of a killer pair of jeans is able to be. Throughout, you see the jeans rip people in half, chomp off their hands, and even eat their entire flesh – and in between all of that, there’s a Bollywood dance number where the jeans happily grooves along to a jaunty Indian song. This is a movie that is definitely not taking itself seriously, and it’s all the better for it, because it’s often gleefully entertaining in how it flaunts its own ridiculousness like the characters in the movie show off their identity-free store-brand tops.

Director and co-writer Elza Kephart injects so much B-movie energy into her film that it sometimes feels like a nice throwback to some of the more out-there exploitation horror concepts from the 70s and 80s. Her direction intentionally heightens everything from the over-the-top performances (particularly an extremely hammy Brett Donahue, who’s having a blast as the human villain of the piece), to the rather impressive practical effects used to bring these jeans to life, to even its miniscule 77-minute runtime, to closely resemble the kind of trashy midnight movies from those eras which just run with their crazy premises and deliver all the cheap thrills they can possibly communicate to their audience. Most of it pays off, in a sly and darkly comedic sense as it’s highly satisfying seeing some of these incredibly obnoxious hipster stereotypes get maimed by a pair of possessed jeans.

Naturally, there are parts where even its grindhouse movie charm cannot mask some of the more glaring filmmaking fallbacks. While there are a couple of very entertaining death scenes shown on-camera, there are also a surprising amount of kills that are committed off-screen, particularly some of the bloodier ones; my guess is that this was probably due to budgetary restrictions, but it still seems like they cut some corners in order to get away with it, and it’s extremely noticeable. As a horror-comedy, it is also lacking a little on the comedy side, with characters who feel far too much like lazy millennial stereotypes to be clever (though, again, it was never this movie’s intention to come across as clever, even in its not-so-subtle stab at the inhuman use of child labour and sweat shops by big clothing brands to make their cheap clothes), while it leaves things off on an ending which simultaneously feels appropriate yet leaves way too much to the imagination.

For the most part, though, if all you want is a silly horror movie where the killer is a possessed pair of jeans, it’s a miracle that Slaxx just about works for what it is. Genre fans will likely find this a dumb, but entertaining, slasher to comfortably slip into on a mindless evening in.

Slaxx takes its extremely silly premise of a possessed pair of jeans that kills people and just runs with it, resulting in an often entertaining B-movie throwback that never takes itself too seriously, though its oddly-neutered approach to some of its bloodier death scenes (most likely due to budget limitations) means that it doesn’t always reach its full potential of ridiculousness.

Slaxx is now available to stream on Shudder.