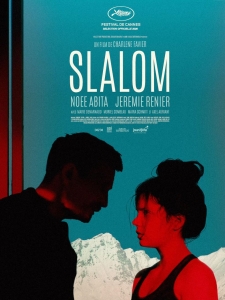 BASICALLY…: A teen skiing prodigy (Abita) is taken advantage of in the worst possible way by her strict trainer (Renier)…

In the world of sports, and indeed many other industries, there have sadly been far too many incidents where the lines between mentor and mentee have been blurred by the former’s despicable and predatory conduct against the latter. There have been few noteworthy films honing on this particular subject, like last year’s harrowing Netflix documentary Athlete A, and now with Slalom, because it’s a very difficult subject to dramatize; after all, how on Earth do you examine sexual abuse of any kind without triggering some deeply uncomfortable imagery within the mindset of your audience?

It definitely isn’t easy, and Slalom – the feature debut of director and co-writer Charlène Favier – is proof that, even in the most tasteful of lights, the depiction still leaves an extremely ugly taste in your mouth.

In the film, our focus is on the relationship between 15-year-old Lyz (Noée Abita) and her mentor Fred (Jérémie Renier); she is a naturally gifted skiing prodigy attending a prestigious academy in the French Alps, while he is her strict and often harsh trainer who is himself a retired ski champion. Lyz’s lack of parental figures – her mother (Muriel Combeau) is off working in Marseille, while her father is practically non-existent – leaves her with a yearning desire for a meaningful connection, and with Fred being the only adult around who seems to give her the encouragement and attention she needs, a crush is inevitably developed for him. Unfortunately, the feeling’s mutual, and soon after some classic grooming tactics (he buys her an expensive new pair of skis), Fred takes full advantage of Lyz’s vulnerability and instigates a fierce interaction that leaves Lyz, still uncertain of her place in the world, to react with great confusion and tragic decline in her potential.

Favier manages to create an overwhelming feeling of uncomfortableness whenever our two leads are alone together; the tone, naturally, is rather bleak, matched by some dark but pretty cinematography to further disguise how this harrowing tale of sexual abuse is visually framed almost like a warped romantic drama. In her script, written in partnership with co-writer Marie Talon, Favier makes no attempts to hide how awkward and wrong this entire dynamic is, especially as Fred’s characteristics can easily be matched to that of your classic statutory predator, which poor Lyz is all too naïve and accepting to question. The two performances by Jérémie Renier and Noée Abita as abuser and victim respectively are also very strong, especially the latter who plays a character whose innocence you can see slowly fading away in her young doe-like eyes, which makes it so hard to watch as you constantly see her being taken advantage of by this seedy and morally corrupt man, who Renier portrays as a cross between J.K. Simmons in Whiplash and Harvey Weinstein.

Just as Fred’s abuse begins to overshadow Lyz’s training and studying, the central sexual abuse theme also takes full precedence over other aspects of the film’s development, which on the one hand is good that the film retains focus on its biggest topics, but on the other leaves a few small but significant portions out in the snow. A sub-plot involving one of Lyz’s friends clearly harbouring a same-sex attraction to their teammate is all too brief, dropped almost as soon as it becomes apparent and almost never investigated earlier, leading one to ponder if it was at all necessary to even leave in the final film. It’s also one of those movies that ends somewhat abruptly, leaving you with the immediate thought of, “is that it?” even when it seems like there’s plenty of story left to unearth here. Some vagueness is welcome, of course, but not so much that you actually start to question what exactly is the endgame for either of these characters by the end.

Slalom is a film that definitely serves its purpose – which is to depict an incident of sexual abuse that feels far too realistic in a post-#MeToo spotlight – but beyond its primary objective, it’s only a fairly decent movie. The acting is solid, and it’s well-shot, but some unfilled holes in the overall narrative aren’t given as much attention as the main topic, which leaves it slightly unbalanced. I’ll give it some points for being bold enough to depict something as heinous as what happens on-screen in the most tasteful and respectful way possible – knowing that actress Noée Abita, playing a 15-year-old, was in fact 20 at the time of shooting takes the edge off slightly when things become more graphic, though obviously that doesn’t make it the least bit okay to watch – but with such a heavy theme on its shoulders, it could have gone the extra mile in showing some of its deeper consequences, which it really doesn’t all that much.

Good performances and a solid tone give Slalom enough weight, but it’s a bit too imperfect to completely stick the landing.

Slalom is an often uncomfortable depiction of a sexually abusive relationship between a skiing prodigy and her trainer, but despite some solid lead performances by Noée Abita and Jérémie Renier, and a consistently dour tone provided by director Charlène Favier, a few unfilled holes in the script leave it unbalanced.

Slalom is now available to rent on Curzon Home Cinema.