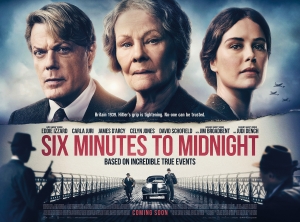 BASICALLY…: In 1939, at an English finishing school for the daughters of influential German figures, a teacher (Izzard) seeks to save them from their inevitable fate…

As the latest film to get chucked onto Sky Cinema/Now TV after its cinema plans were flung into oblivion (upcoming ones include the Janelle Monáe horror Antebellum, and the multi-Oscar contender Promising Young Woman), Six Minutes To Midnight ironically plays best on a smaller screen, because it actually does feel like a made-for-TV feature-length drama you’d find on a BBC channel during an early Sunday afternoon slot.

Granted, this one has a slightly higher production values than your standard TV movie, or at least it probably does since it can afford to hire some very recognisable British talent as both cast and crew, but of course having Judi Dench as part of the cast doesn’t automatically mean it’s of the highest quality (lest we forget, she appeared in both Cats and Artemis Fowl within six months of each other). In fact, this film is its own brand of strange, because while you can feel the interest that star and co-writer Eddie Izzard clearly has for this real-life inspiration, the comedian’s trademark oddities still manage to seep into this storytelling, which is somehow the bizarre combination of The 39 Steps and Ilsa, She Wolf of the SS.

Set during the final days of summer 1939, with Britain literally on the brink of war with Germany, Thomas Miller (Izzard) arrives at Victoria Augusta College in Bexhill-on-Sea, an Anglo-German finishing school for the daughters and young female relatives of high-ranking Nazi officials, to apply as the faculty’s new English teacher. Very quickly – and I do mean VERY quickly – Miller manages to win over not just his impressionable students, but also the school’s headmistress Miss Rocholl (Dench) as well as its only other teacher Ilse (Carla Juri, who half the time I was reminding myself wasn’t actually a digitally de-aged Sarah Paulson). Unbeknownst to everyone, though, Miller is actually a British Intelligence agent, sent in undercover after his predecessor goes missing, and before you’ve had a chance to really absorb a lot of this information, he’s suddenly caught in the middle of a murder conspiracy which only gets more and more ridiculous with each and every turn, especially when the real baddie makes themselves known in ways that really embrace its random Nazisploitation side (without any of the more hardcore stuff, naturally).

The most interesting thing to take away from the film is the fact that Victoria Augusta College was actually a real institution at the time; complete with a school crest that combined the images of the Union Jack and the Nazi swastika, the history of the finishing school caught Bexhill-on-Sea native Izzard’s eye during a visit to the area’s history museum, and never really left her mind since (and yes, I am indeed using Izzard’s preferred pronouns when talking about her). Her script, co-written by Celyn Jones and the film’s director Andy Goddard, is the result of years being driven by the idea of a Nazi finishing school on English soil just as the Second World War was about to break out; however, said script is oddly disjointed, with so much in terms of story and character development happening at breakneck speed that it feels very rushed, and leaves some of the more tender moments with extremely little room to resonate (Izzard’s relationship with a less confident young girl at the school, and Dench’s sympathies with the “hail victory” aspect of the Nazi salute, are among them). It really could have used at least another half an hour to stretch out some of these things, because how they’re presented here is so quick that it’s as though they just sped right past you on the racecourse.

It’s also a script that desperately wants to be an engaging spy thriller, but doesn’t realise that it’s more of an unintentional comedy, especially in how co-writer Izzard lays out some of the twists and turns which become increasingly more ridiculous. This especially becomes apparent when the villain of the movie shows their true colours, and without giving away who it might be (because while this movie isn’t very good, that doesn’t mean I should be a dick and spoil it for anyone who still might be interested) their performance turns hammy within seconds, like they’re Nazi Mary Poppins all of a sudden. Even Izzard herself, who has been cast in more dramatic roles before and done just fine, feels wildly out of place as the main lead, with scenes of her character running wildly from the authorities or other enemies, and occasionally hiding from them in disguise as a member of a marching band, just beyond the realm of what we can take seriously. Leave it to Judi Dench to bring a little bit of class to the ludicrousness, because even when her character’s motivations make absolutely no sense, the veteran is still able to sell them well enough to see how, in this weird universe this all takes place in, it actually holds water.

It definitely has “TV movie of the week” vibes, from the calm and unassuming filmmaking to the gentle subject matter, but the script is a lot more bizarre than you’re probably thinking it might be, with ridiculousness to spare and then some. In a way, I feel bad for Izzard because Six Minutes To Midnight is something of a passion project for her and I know how much it probably meant to her to tell this story to the world, but there seriously needed to be a lot more time given to developing certain things and a lot less weirdness for it to resonate as well as it should have done.

Six Minutes To Midnight is a rather bizarre passion project for co-writer and star Eddie Izzard, whose clear fascination with the real-life Anglo-German finishing school is evident, but a weird script that rushes key components and executes its ridiculous developments so oddly that it becomes unintentionally funny.

Six Minutes To Midnight is now available on Sky Cinema and NOW TV.