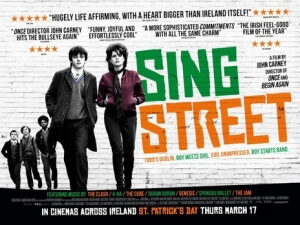 BASICALLY…: Irish teenager Cosmo (Walsh-Peelo) is moved out of private school and into a hellish Catholic state school, where he soon forms a band to impress local girl Raphina (Boynton)…

John Carney seems to have now mastered the not-quite-a-musical genre, i.e. a film that features much singing and/or dancing but isn’t an actual all-singing-all-dancing film as a whole. Now, following on from his Oscar-winning Once and his Oscar-nominated Begin Again – both in the Original Song category, interestingly – comes his most not-quite-a-musical film to date, one that perhaps operates on a more personal level than his previous two films combined.

Sing Street, a semi-autobiographical account of Carney’s own childhood, takes place in 1985 Ireland during a country-wide economic crisis, with many people seen fleeing to London to find more prosperous lives. The slump hits the family of teenager Conor aka “Cosmo” (Ferdia Walsh-Peelo) hard, with his parents’ (Aidan Gillen and Maria Doyle Kennedy) imploding marriage and the fact that he has just been transferred to a public school in order to save money. Shortly after starting, and facing the wrath of school bullies and his monstrous headteacher Brother Baxter (Don Wycherley), he comes across the alluring presence of a girl named Raphina (Lucy Boynton), who he invites to act as a model for a music video his non-existent band is putting together. Under the tutelage of his slacker older brother Brendan (Jack Reynor), he eventually does put a band together, all the while impressing Raphina more and more, even sharing a sweet bond with her over the course of the film.

This, as you may have guessed, is where the not-quite-a-musical genre really starts to kick in. Although initially doing covers of other popular songs, Cosmo is persuaded – in a rather damning assault on the current and tired trend of jukebox musicals – to write his own material and thus find his own voice. The songs that the characters within the film come up with are genuinely toe-tapping and fun to listen to, all drenched in that cheesy-but-golden 80s style of music, with not one being out of place within the overall narrative or the band’s own evolving musical voice. The early ballad titled “The Riddle of the Model” is a good time, while a later Back To The Future and Grease-inspired fantasy sequence set to their own tune “Drive It Like You Stole It” is a legitimate show-stopper and overall highlight. It’s also fun to watch these characters come up with the lyrics and rhythms for their songs, as well as plan the blocking and directions for their actual music videos, partly because it all comes so naturally from these fine young actors and also because it can sometimes be a true joy to watch a song in its very early stages of development, as though we are paying witness to a miraculous birth that we will be unfortunate to never see again. Some fine singing and instrument-playing make the original content all the more special, and it will be interesting to see if one of them can complete Carney’s hat-trick of having each of his films be up for the Original Song Oscar come next awards season.

However, while the musical element thrives strongly in this film, it is still very much a not-quite-a-musical, and furthering that statement is the level of drama that brings everything back to the ground in one fell swoop. One of the main struggle for Cosmo, outside of the ones previously mentioned, is watching his own family be torn apart; his mother and father are endlessly arguing with each other, while Brendan is a college dropout who seems to be progressing absolutely nowhere with his life. The economic situation certainly doesn’t help anybody, but for Cosmo it’s a driving force to go out and do something worthwhile that makes him happy while his family is very slowly but surely headed towards destruction. Watching your own family implode is hard for anyone to go through, and in this case it is a rather tragic parallel to see this young guy find true happiness while those closest to him are going through some extremely unfortunate obstacles. You can argue that it’s all a coping mechanism for Cosmo, something to distract him from the real situations he’s forced to endure; and once again, it’s thanks to some very good actors and a script that knows what it wants to be that it all comes together to make something that anyone can feel emotional over.

A lively soundtrack accompanies the original songs by the titular band – named after the school they all go to, Synge Street CBS – including numbers by Duran Duran, The Cure, Motörhead, A-Ha, and even an ending track by Adam Levine (which, even though the Maroon 5 singer featured in Carney’s Begin Again, is a slightly odd choice to go with amid all the 80s pop music), which Carney incorporates well into the film while never letting them overshadow the original material displayed within the film. As well he shouldn’t; not only is the original music extremely fun to listen to, but a powerful indication of how much a musical, even a not-quite-a-musical such as Sing Street, needs to rest firmly on the foundations of originality instead of throwing in a bunch of era-appropriate songs and having the cast just do karaoke versions of them for the whole running time.

Sure, jukebox musicals can be fun, but when everybody’s doing them either on stage or on film, it can take away the magic of musical storytelling.  Luckily, as long as they’re as fun and feel-good as Sing Street, we won’t run out of original show-stoppers any time soon.

Sing Street is a fun not-quite-a-musical that’s yet another crowd-pleaser from writer-director John Carney, who balances out the toe-tapping joy of the original music on display with some tender and heartfelt drama that holds the interest of the viewer long enough to suck them into the spiritual world of the mid-80s and never making them want to leave.