Sing Me A Song (Review)

Sing Me A Song (Review) 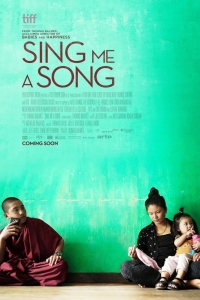 BASICALLY…: A young Buddhist monk discovers the Internet when it finally arrives in his tiny Bhutan village…

The world has become so reliant on technology and the Internet, especially over the last twelve months, that the thought of existing without either of those things now seems unthinkable. For the handful of countries who until recent years had no access to those things, they’ve got a lot of catching up to do, but according to filmmaker Thomas Balmès’ subdued movie Sing Me A Song, it should (rather eerily) take them no time at all.

The film is more or less a sequel to Balmès’ 2013 documentary Happiness, which oversaw the introduction of television and the Internet in the otherwise undeveloped nation of Bhutan, all told through the curious eyes of a seven-year-old aspiring monk named Payangki. Sing Me A Song picks things up ten years later, when it is not just a now-teenage Payangki who’s fully immersed in his phone, but all of the other young monks at a remote monastery as well; they’re playing mobile games in the middle of prayer sessions, listening to music, and in Payangki’s case heavily communicating on Chinese messaging app WeChat with pretty young singers. As a result of his alarming new focus, Payangki is falling behind on his studies, which causes him to start thinking about what kind of life he wants to live: one where he’s heavily into video games and online culture, or one where he’s staying true to the dreams and aspirations of his younger self.

It certainly feels like one of those movies that could easily turn into an anti-technology propaganda piece, kind of like how Jason Reitman’s woefully misguided Men, Women and Children ended up being, but Balmès appears to be a smart enough filmmaker to just let the images speak for themselves, without completely bashing you over the head with its themes. You can definitely create a number of interesting discussions surrounding this film, from the psychological damages caused by excessive Internet use by a younger generation, to the seemingly unstoppable rise of the Internet in general, although Balmès doesn’t seem too occupied with delivering any such message, but rather just wants to document this particular young Buddhist teen’s experiences with technology, in all of its strange forms. In that sense, it’s an interesting watch; as Payangki becomes more and more addicted to his phone, you start to see how he and his fellow young monks become influenced by Internet culture in ways that would be unthinkable for any Buddhist monk to adopt. For example, during one sequence they purchase toy guns and play war games with each other; normal enough practises for kids in any other part of the world, but for young monks-in-training who are in the process of being taught the peaceful ways of Buddha, it’s both funny but also a little shocking.

Regardless of that suggestive imagery, Balmès once again refuses to choose a side in the debate of online influence on children, and instead puts all of his attention on telling this new story with the same young monk he filmed not that many years ago. I should point out that I did not watch Happiness before this one, nor was I even aware that Sing Me A Song was a follow-up to that film, so to find out afterwards that it is indeed a sequel started adding certain things up for me. Although it begins with flashback footage to Payangki as a young boy (presumably cut-and-pasted from Happiness), the sudden jump to present day and the film’s subsequent meandering pace, as if to suggest there was a whole chunk of this story missing from beforehand, suddenly made a lot more sense, because while the movie contains some gorgeous cinematography it was difficult to connect to the people on-screen due to a noticeable lack of development. Perhaps I should have watched Happiness before this film, as it would have given me a slightly more insightful look into this boy’s life before the radical takeover of technology on his life, but there’s nothing I can do about it now and can only go off of what I see here, and again it’s nothing too bad, but it did feel a little emotionally empty.

It was also a frustrating viewing experience for me, because while it clearly labels itself as a documentary, it feels way more like a scripted drama than anything factual. I don’t even think it’s fair to compromise and call it a docu-drama, because aside from perhaps the use of people’s real names there’s virtually nothing here to suggest that it was intended as a documentary. Everyone looks and acts like they’re giving a performance with lines that they have rehearsed (which isn’t necessarily a bad thing in this case, because if it was indeed staged then these are some decent performers), while a lot of the shots feel like they were storyboarded instead of being captured naturally as documentaries tend to do. It really did throw me off a lot while watching it, because I kept waiting for the movie to properly identify itself as a documentary like it had everywhere else, but that moment never came, and I’m wondering why they didn’t just label it as a drama instead if that was the direction it was going for.

The movie itself is fine, but I really do wish it had more of an understanding of what it actually was. If it wanted to be a documentary, then it shouldn’t have been afraid to just be a documentary, and the same if it wanted to be a drama; it works as either one, but not as one while masquerading as another. That’s probably just down to personal tastes, but it did sadly prevent me from being way more engrossed in this film than I perhaps ought to have been.

Sing Me A Song is a subdued but slightly frustrating film about a teenage monk’s growing obsession with technology and the Internet, which inspires a number of discussion topics but lacks a deep emotional core when following its subjects, something that is further marred by a noticeable lack of documentary attributes for a film that calls itself a documentary, feeling more like a drama than anything which can be a distracting thought throughout.

Sing Me A Song is out now on digital and in cinemas (where available).