Silk Road (Review) – Probably Should Have Been A Documentary Instead 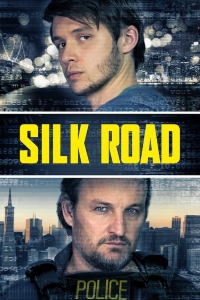 The story behind the dark-web site Silk Road, which specialised in online drug trafficking, Bitcoin currency and Amazon-like shipping through the United States Postal Service, and its young operator Ross Ulbricht – who was only 29 years old when he was finally apprehended and incarcerated on several charges of money laundering and conspiracy – is certainly fascinating enough to justify its movie treatment. There’s a lot that can be said here about the new generation of cyber-criminals, as well as the very nature of online privacy, all in a tale that, if told right, could serve as a cautionary tale for both illegal online venturers and older law-folk struggling to understand the new way of doing things.

It’s the kind of material that would definitely be ripe for a Netflix documentary, but as a more traditional narrative feature there are clearly some hurdles to overcome, and while writer-director Tiller Russell’s Silk Road taps into some of these intriguing themes here and there, it’s not enough to give the film much of a personality beyond its generic crime-movie formula.

Adapted from journalist David Kushner’s Rolling Stone article Dead End on Silk Road, Russell’s film introduces us to young entrepreneur Ross Ulbricht (Nick Robinson), a self-described libertarian with grand ambitions to change the world, in 2011 when he first comes up with the idea to start a website where users can sell and buy narcotics via private servers and using crypto-currency. Ross’s website soon becomes incredibly popular, earning him over $1 million per day, but naturally it also attracts the attention of federal agents. This is where we also follow Rick Bowden (Jason Clarke), a loose-cannon DEA agent who’s just returned home after a stint in rehab, only to find he’s been demoted to the cybercrimes unit, despite his new boss being half his age and him not having the first clue as to how computers apparently work. Bowden is soon alerted to the existence of Silk Road, and gradually he develops an encrypted chat with Ross – operating under the Princess Bride-referencing pseudonym “Dread Pirate Roberts” – which sends the two of them on a collision course, where one is trying to evade capture while the other is trying to bring him down.

What should be a topical and truly engrossing crime thriller instead succumbs to an abundance of genre tropes done in ways that would only appeal to the annoying hipster crowd. Russell’s script blandly tries to replicate the Heat dynamic between criminal Nick Robinson and lawman Jason Clarke, though it lacks the nuance and even the on-screen gravitas that Michael Mann’s film and its leads Al Pacino and Robert De Niro brought to the game. That being said, there are times when Silk Road does touch upon a number of interesting parallels between the two; Robinson’s Ulbricht is a computer-whizz who clearly possesses enough talent to pull most of his online shenanigans off (though the details about how he’s able to get away with a lot of it are surprisingly sketchy here), while Clarke’s Bowden can barely operate a laptop when he’s first reassigned to the cyber branch, but slowly learns the tricks of the trade well enough to bring the little punk down. It’s things like these where writer-director Russell clearly shows a level of understanding when it comes to depicting some of the themes that are hinted at with this story, but they’re far and few in between as he largely settles for a much more familiar set-up that’s part-The Social Network and part-your average TV procedural.

Crucially, though, the movie struggles to get you on either side of the argument. Clarke’s DEA agent is too much of a stereotypically hostile ruffian to fully sympathise with – despite the added sub-plot involving his family, as well as Clarke’s admittedly committed performance – but Robinson’s Ulbricht is far more of an insufferable dick, always condescending to his girlfriend and anyone else who doesn’t understand the things that he does, and just as equally delivering nihilistic anti-government rants which are written like they’re lifted directly from the Twitter account of some lowly edgelord. Robinson’s a fine actor, and does decent work here, but his character here does not have enough charm or charisma to make you buy that he can do any of the things he’s doing here, or to persuade you to come around to his anarchic point of view. So, for most of the film, you’re stuck with two hard-to-like characters who keep saying and doing things which make it more and more difficult for you to follow or care about either of them.

If the movie was perhaps more unique in its approach, instead of just sticking to a safe formula, then there could have been something to take out of Silk Road other than some of its interesting themes as well as a couple of fine lead performances. Otherwise, it’s more or less just a mediocre display of material that perhaps could have benefited from being a documentary instead.

Silk Road offers little excitement in its depiction of the fascinating true-crime story behind the titular dark-web narcotics site, thanks to a formulaic structure and a script which gives us a pair of lead characters who are very hard to root for or care about, despite the occasional exploration of certain intriguing themes raised by writer-director Tiller Russell.