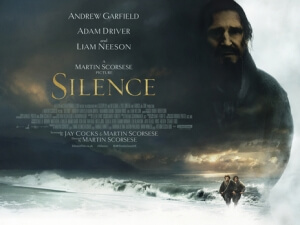 BASICALLY…: Two Jesuit priests (Garfield and Driver) travel to Japan when they learn that their mentor (Neeson) has denounced his faith after being tortured by anti-Christian Japanese forces…

Martin Scorsese has wanted to make Silence for nearly thirty years, and for very good reason. A budding Catholic priest himself before filmmaking became the more preferred career path, Scorsese has had the adaptation of Shūsaku Endō’s 1966 novel – the second such adaptation, after a big-screen version in 1971 – in the back of his mind as a passion project after being aroused by its rough themes of faith and morality. Now that it is finally here, years after first developing the project, and within that time having brought us popular films like The Wolf of Wall Street and The Departed (not to mention finally winning his long-overdue Oscar for the latter), is Silence actually worth screaming about?

Thankfully, it is not only one of Scorsese’s most powerful films in years, but it also sets a bar for faith-based movies that the large majority of ones out there like God’s Not Dead and War Room could never rise above, nor even make it past the first hurdle. There’s a simple reason for this: unlike those films, Silence wasn’t made by someone with overly conservative views towards religion that are biased and mean-spirited (ironic, for something meant to represent Christian values), and he gives the story all the time it needs – almost three hours, in fact – to explore the very notion of blind faith and how it can protect or destroy those around us in particularly harsh circumstances. It’s also astonishingly directed, superbly acted, and one of the most gorgeously shot films that Scorsese has ever made.

The film is set in the 1600s, a time when Catholicism was outlawed in Japan and Christians were forced into hiding. Those suspected by the Japanese forces were captured, tortured and forced to publically apostatise – which means to denounce their faith – or else be subject to more hardship. The film sees two Portuguese Jesuit priests, Rodrigues (Andrew Garfield) and Garrpe (Adam Driver), receiving news that their mentor Father Ferreira (Liam Neeson) has apostatised after being tortured, and they set out to Japan to find him and spread their faith and goodwill within the underground communities in Nagasaki. There, the priests – Rodrigues in particular, after the two are separated – begin to question their own faith, especially after they witness atrocity after atrocity towards subjugated Christians with no response from a higher power.

With Silence, Scorsese completes his unofficial trilogy of spiritual and faith-based films, which started with the controversial The Last Temptation of Christ and continued with his little-seen Dalai Lama epic Kundun. It is interesting how in all three, the concept of religion is challenged by opposing forces that are all too human – or, in some cases, literally satanic – while the side that fights for its good values always loses something in the battle. However, this particular fight has never been as brutal as it is in Silence, where budding Christians are subjugated and humiliated in extreme methods purely for their beliefs. This ranges from being hung on a cross and left to drown in the rising tide, to being coerced into stepping on a stone with a religious picture carved onto it as a symbolic denunciation of Christianity, and these are only a few of the many torturous methods used by the Japanese in this film. Scorsese shows us this dark and challenging era of history with an uncompromising bleak tone that makes it uncomfortable to watch but at the same time hard to look away from, as it is so passionately presented through slow but steady direction and astonishing visuals by cinematographer Rodrigo Prieto, that even in its darkest moments of torture and the lead character’s inner struggle with his own beliefs, you still have – erm – faith that he will make the right decision that will not only save his soul but the lives of countless others.

However, don’t go in expecting this to be a particularly happy tale – a fact you probably should have already figured out by now from just reading about it – as it will test your own tolerance for extended persecution, all leading up to a major climactic decision that many will consider to be a major downer. It is an emotionally draining experience, one that the long running time makes even more agonising, as you feel every single blow against the lead character and those being tortured around him, especially in one scene with perhaps the most chillingly nonchalant on-screen decapitation in recent memory. Through most of these scenes, we are right there with Andrew Garfield – who is absolutely fantastic in the movie, by the way – as he is witnessing the atrocities happening just feet away from him, and when it reaches the emotional climax we are just as ready to throw in the towel as he may or may not be. The sadism comes at him left and right, including from a particularly nasty and emotionally abusive interpreter, and – perhaps most notably – a genuinely creepy elderly gentleman played by Japanese actor and comedian Issey Ogata, who looks and sounds like he came from a racist wartime Bugs Bunny cartoon, but has the mannerisms and characterisations of a classic movie villain, and is far more terrifying than I am probably making out to be right now. These are the sort of things that Garfield’s character has to deal with constantly in the film, and Scorsese does such strong work in making them terrifying figures in this movie while also reminding us that they too are dangerously human.

It is a moving and profound viewing experience that is likely to haunt you for days afterwards, which should come as good news to Scorsese who, after many years of trying to get Silence off the ground, can rest easy knowing that his passion project is also one of his strongest in years.

Silence is an emotionally powerful exploration of faith and the damage to it caused by relentless persecution, one that Martin Scorsese directs with all his heart and makes look absolutely astonishing, even in its far bleaker moments.