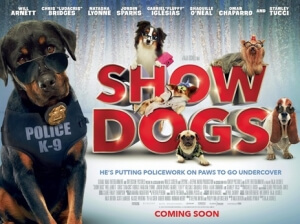 BASICALLY…: A Rottweiler policer dog (Bridges) and his human partner (Arnett) go undercover at a prestigious dog show in order to solve a case…

I’m almost at a loss for words on this one. I seriously cannot believe that Show Dogs is a movie that is playing in cinemas right now, and worse yet is a movie that I willingly sat down to watch (I hope all of you appreciate the noble sacrifices I make for this website), which means that no matter what I thought of it afterwards, I contributed to its ticket sales that it has no right to revel in. So, I left this movie with a sense of embarrassment that I actually got myself a ticket to this absolute dreck – but I didn’t technically pay for it; thanks, Cineworld Unlimited membership – as well as endless feelings of confusion about how this movie could have possibly ended up in cinemas, when a direct-to-video release would have been more than enough.

In case you’re confused, let me make it clear for you – Show Dogs is bad. It’s really bad. It’s really, REALLY bad. Just watch the trailer for this atrocity and try to tell me otherwise, because everyone with a brain in their head – one of the many things that this film is lacking – can tell you that, even sight unseen, this is a huge pile of dog turds.

The plot to what is easily the worst kids movie since The Emoji Movie takes place in a world where apparently dogs are ranked as equally as humans in the police force – this is a movie where every cop seems to have a canine sidekick by their side, which makes you wonder if they  also investigate more serious crimes like rape, murder, arson etc – and where one cop dog, a Rottweiler named Max (voiced by Ludacris with all the enthusiasm of a person recording lines for a movie like Show Dogs), is something of a lone wolf (one of the few dog puns that I’m actually amazed by how it wasn’t in this film). He is paired with human FBI agent Will Arnett – who has a name in the movie, but his character is so non-essential and without any dimension to him whatsoever that you might as well just stick to calling him Will Arnett – to solve a case that involves a missing panda, and requires them to travel to Las Vegas and go undercover at a prestigious dog show to find the criminals and rescue the trafficked animal.

All of that paves the way for a film that is made up entirely of terrible puns, annoying characters, completely inept filmmaking, and some of the worst CGI you’ll see in a major live-action release in a long while. They have all of the dogs talk in this movie by adding CG effects to their mouths to make it look like they are moving as they speak, but the end results are so freakishly unnatural that you will be spending far more time looking for glitches in these effects than paying attention to whatever the hell they are saying. There are also moments that have them doing all of these impossible stunts via some even faker-looking effects, which not only make it seem more and more like a shoddy cartoon, but are done in a way that actually make you feel scared by their uncanny valley nature, like a scene where Max the dog pretends to be inbred and it looks just as cartoonish and frightening as the effects work in something like Son of the Mask. It’s atrocious to look at, and you have to count yourself lucky if you fall asleep without these freakish CGI dog faces popping up in your nightmares afterwards.

It is a script so lazily written that plot points will just be conveniently handed to us without working hard for it, and it replaces essential character growth and hubris with terrible dog-related puns, irritating vocal performances, and moments of drama that fall completely flat on its ugly little face. Director Raja Gosnell is not particularly well-received amongst fans and critics alike, for his work on films like Beverly Hills Chihuahua, The Smurfs, Scooby-Doo and Home Alone 3, but with this film he has sunk to a whole new level, with direction so lazy and editing so inept that it makes the film look completely and utterly amateurish, or at the very least like something that should not belong in a cinema at any capacity. Gosnell seems to have made a film that looks like it belongs in a film that satirises Hollywood laziness and creative bankruptcy, like the trailers at the beginning of Tropic Thunder, but the irony and satire was completely lost on the filmmaker and he just went ahead and made this with genuine intent, in doing so hiring actors both live-action and in the recording booth who are all too good for this material. You’ve got to hand it to Will Arnett, whose clear contempt for this material is all over his face as he’s made to act opposite these terrifyingly-CGI’d dogs, but he came in and did his lines like the professional that he is, even if he is given absolutely no character or arc to work off of in the slightest; the voice actors on the other hand, not just Ludacris but also others like Stanley Tucci and Shaquille O’Neal (because of course he’s in this), must have seen this as the easiest paycheck they ever received, even if it cost them all but their integrity.

This is a movie so inconceivably bad that nobody, not even children, will find this remotely wholesome. The screening I was in was filled with families that included small children, and not a sound was heard out of anyone, except for a slight wriggling in their seats, presumably from boredom. In that regard, this is a movie that is clearly made for nobody with a brain in their head, and to call this a movie that only children would enjoy is not only a lie but highly insulting to their intelligence. I urge you to stay as far away from Show Dogs as you possibly can, because it will cost you a few of your precious brain-cells not just from how stupid and awfully processed it is, but from trying to figure out why anyone would think to put this undeniable dog turd in cinemas for the world to see.

Show Dogs is worst in show; inept filmmaking, lazy writing, and horrifying CGI make it a rabid creature that should be put down immediately.