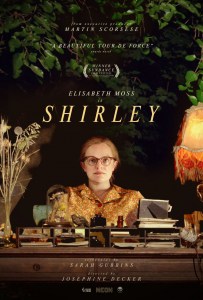 BASICALLY…: Famed horror writer Shirley Jackson (Moss) finds inspiration for her latest book when she and her husband (Stuhlbarg) take in a young couple (Young and Lerman)…

Writer Shirley Jackson was best known for her chilling stories, from her novels including The Haunting of Hill House and Hangsaman to shorter tomes like The Lottery and The Possibility of Evil, so a biopic about her life was always going to opt for a less conventional approach. However, while director Josephine Decker’s Shirley – based on Susan Scarf Merrell’s novel of the same name – is relatively unique in that it styles itself exactly like the chilling worlds that the writer herself conjured up, and has a number of other admirable accomplishments, the overall satisfaction one gets from sitting through a rather cruel (albeit fictional) aspect of the writer’s strange existence can’t help but feel a little empty.

Set during the early 1950s, young couple Fred and Rose (Logan Lerman and Odessa Young) are invited to temporarily stay with Shirley Jackson (Elisabeth Moss) and her husband Stanley (Michael Stuhlbarg), while Fred gets settled into his new position at the same university where Stanley lectures. While the men are out, Rose is left in the house with Jackson as she feverishly attempts to begin writing what will ultimately be her acclaimed novel Hangsaman; Jackson soon takes a great interest in Rose and her husband, as does Stanley who both feel like their presence is beneficial to Jackson’s creative process, but soon their interest takes an obsessive turn as their manipulation and abuse of the young couple begins to have negative effects on their guests.

There are certainly good things to say about the film; for one, the tone chosen for it is extremely interesting, with it looking and sounding exactly like the kind of psychological thriller that Shirley Jackson herself would have come up with, even crossing over sometimes into horror territory. Decker goes all out with the claustrophobic cinematography – lots of facial close-ups dominate scenes, as does an uneasy colour scheme – and certainly makes the audience feel uncomfortable as they learn more and more about these characters with whom there’s always something quite off, even the more innocent young couple. Their relationship seems to be built on restraint and mild-mannered sensibilities, with Rose always being the one to instigate sex between them (he is oddly reserved when it comes to making love to his own wife) and even making their pregnancy a muted deal, with it only being brought up when Shirley correctly deduces it early on in the movie. Meanwhile, the relationship between Shirley and her husband is a lot more layered; he’s clearly a philanderer, but their agreement allows him to fool around so long as he tells her everything about his affairs, something that has driven Shirley herself into an erratic mixed state of depression, hysteria and sometimes monstrous cruelty. The way it portrays these characters’ relationships with each other, and where their paths eventually lead, is other-worldly thanks to Decker’s astute direction and some strong performances across the board, particularly Elisabeth Moss who excels as the titular author herself.

Yet, there was something about Shirley that did not especially feel satisfying. Since it is about someone who really existed, you’re constantly waiting to learn a bit more about them other than how they are portrayed in the film, and while it is most certainly an unconventional biopic, it is a biopic nonetheless so when you end the film still not knowing a whole lot about Shirley Jackson herself, it feels like you’ve somewhat wasted your time. There is an sense of pointlessness to it, because despite the clear dive into its characters’ unhinged psyches, you don’t know a lot about them as actual people to properly care, and where things eventually end up isn’t all that different from how they started off. What the film does tell you about Shirley Jackson, you don’t especially sympathise with because both her and her husband act so needlessly cruel to this young couple a lot of the time, often for their own self-interests, and it made me really not eager to learn more about this person other than for basic research for this review.

While I can’t say it’s a bad film by any means, its emptiness on a substantial level is what doesn’t exactly have me raving about it, either.

Shirley takes an unconventional approach to a biographical look at horror writer Shirley Jackson, but despite its interesting tone and some strong performances, it can’t help but feel somewhat empty in its execution.