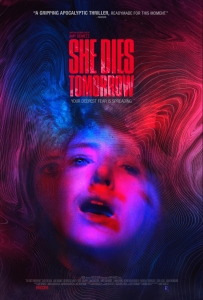 BASICALLY…: A woman (Sheil) wakes up feeling certain she’s about to die, and her close ones also start having the same thoughts as her…

There is a lot to unravel about She Dies Tomorrow, which is quite possibly the most bizarre movie I’ve seen so far this year, and there is honestly no way of knowing where to even start.

The directorial debut of actress Amy Seimetz – who interestingly funded the movie using the salary she earned from last year’s Pet Sematary remake – is a confounding oddity, deeply hypnotic in its visuals and ideas, but at the same time so strange in its execution that you can feel your brain slide to and fro as you try to grasp whatever it’s trying to do. It’s impossible for me to even say if I liked this movie or not, especially after only the first viewing, but regardless of my opinion it’s a movie that, at the very least, deserves some respect for its ambition.

We start off as a woman named Amy (Kate Lyn Sheil) wakes up one morning with one absolute certainty in her head: she is going to die the next day. After spending the day performing one strange ritual after another, from repeating the same piece of music over and over to crawling outside in the grass, she relays her morbid prediction to her friend Jane (Jane Adams), who soon after begins to think the exact same thing about herself. Soon, the idea begins to infect the minds of several people, and they all have very different – but no less odd – reactions to the mental phenomenon until the next day finally arrives.

Not since Carol Morley’s The Falling have I been this baffled by a movie and its very weird execution; the whole time, I was sat there in such awe of this David Lynch-esque meditation on existentialism that at one point I even forgot how movies are supposed to work. It goes without saying that this is not the kind of movie where you expect to get any real answers; it is never explained or even hinted at as to what this phenomenon actually is, nor why it’s able to easily work its way into the psychoses of several people in one fell swoop. A lot of the film is dedicated to several characters simply acting crazy in response to their realisation of imminent death, whether it’s driving drunk or freaking out guests at a dinner party, with no concrete conclusion in sight for any of them, and it leaves you simultaneously fascinated and irritated to see people you don’t know that much about have such a euphoric yet disturbed reaction in ways that honestly don’t go anywhere.

I’ve seen a lot of critics compare the central idea of this film to the ongoing COVID-19 pandemic, and I can definitely see where they’re coming from; after all, a movie about an unseen illness spreading itself around with incredible ease and at such a fast rate (not to mention how most of the film takes place indoors at several locations, as though the crew themselves were self-isolating) can’t not feel timely during these present circumstances. Obviously, it was never the intention of the filmmakers to draw those parallels, since it was made well before that guy in Wuhan ate that bat, but it is very hard not to have that thought in your head while you’re watching it, kind of like how it’s hard for the characters in this movie to shake off the central fatal thought. Though it certainly came up in my mind whilst watching it, I was way more distracted by the insane visuals and odd direction that Seimetz was bringing to this film, so much so that a late cameo from Michelle Rodriguez was by far the least surprising element of the whole thing.

Seimetz clearly has a vision she wants to express, and props to her for making the film she wanted to make with seemingly very little evidence of interference from the powers that be, but the way in which she brings it to life is perhaps a little too surreal for my liking. It completely boils down to personal preference, and not the overall quality of the movie, when I say that this isn’t really my kind of strange cinema, because there’s an odd lack of humanity that prevents me from becoming fully engrossed in this story or these characters, which I understand may have been Seimetz’s point, but it doesn’t suck me in as much as I’d like it to. It’s also one of those movies where the emptiness of the actual plot is so noticeable that it’s difficult to tell what is exactly going on – I feel like I need to apologise to Tenet for thinking the plot of that movie was hard to follow, because at least I was invested in it to some degree – and where it eventually ends up, it’s oddly anti-climactic and not especially thought-provoking. It’s similar to The Lobster in that regard, which was another movie I found to be just a little too weird for my taste, with that same dry tone and muted themes in favour of balls-to-the-wall strangeness, though I will give Seimetz’s film some regard in that it definitely seems like there was passion put into it, and a level of ambition you don’t commonly see in many directorial debuts, especially ones that don’t look like they cost all that much to make.

I’m certain this will gain an audience in some capacity, because there always is a crowd for out-there movies like this, and I salute their tastes for being more adventurous than mine; as for me, while I admire the film for what it’s setting out to do and the very unique way in which it attempts to express itself, I couldn’t overlook the strangeness of it to fully recommend it.

She Dies Tomorrow is one of the strangest films to come out this year, in its surreal handling of its existential themes and timely ideas alone, but the overall execution from writer-director Amy Seimetz, which emphasises its bizarre style over its plot and characters, might be a little too out-there for its own good.

Want to decide what the movie’s like for yourself?
Check out She Dies Tomorrow streaming links
via