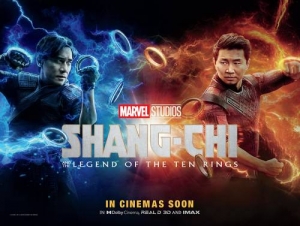 BASICALLY…: After being drawn back into the mysterious world of his criminal father (Leung), Shang-Chi (Liu) is forced to confront his biggest demons…

It’s not that much of a coincidence that Shang-Chi and the Legend of the Ten Rings was greenlit by Marvel Studios after the enormous success of Black Panther. That film’s strong representation of Black and African cultures translated into major critical appraisal, tremendous box office, and even an Oscar nomination for Best Picture, the first superhero movie in history to feature on such a shortlist. Why not, therefore, try and do something similar with the Asian community, which has also felt marginalised in mainstream media and is likewise waiting for its moment to shine?

Don’t mistake these comments for cynicism, though. While it’s definitely easy to draw those comparisons, Shang-Chi and the Legend of the Ten Rings is a majorly impressive action blockbuster on its own terms, and achieves a level of emotion, charm, and especially representation that’s separate from Black Panther but equally as important and thrilling.

Our hero is, of course, Shang-Chi (Simu Liu) who’s going by “Shaun” as he lives in San Francisco, working as a valet with his best friend Katy (Awkwafina). However, his peaceful life is interrupted by the re-emergence of his criminal father Wenwu (Tony Leung), a legendary villain whose terrorist empire the Ten Rings is named after a magical set of bracelets he wears which grant their user immortality and immense power. Forced to face up to the life he left behind, including the abandonment of both his father and his sister Xialing (Meng’er Zhang), Shang-Chi travels with Katy and Xialing on a quest that takes them to mythical realms, underground fight clubs (where a few recognisable MCU faces battle it out), and an out-of-control bus that serves as the film’s first big action scene.

And it’s one hell of a sequence too, setting up the film’s fantastic display of martial arts choreography which Jackie Chan would have flown through back in the day, and its set-pieces which are among some of the MCU’s most visually dazzling since Doctor Strange. Every manoeuvre, from the highest kick to the quickest dodge, is masterfully executed through a near-seamless blend of practical fighting positions and CGI which adds to the scope of the scene, whether it’s on said bus or scaffolding on a tall building. It’s exciting to watch, especially for fans of classic martial arts cinema who may have missed such intricate and carefully constructed choreography in mainstream Hollywood, though there are times when there is so much impressive action happening on-screen that it can become difficult to place your eyes on what you should perhaps be focusing on.

Either way, the film marks an admirable leap forward for director Destin Daniel Cretton, with Shang-Chi and the Legend of the Ten Rings being his first foray into action territory after much quieter dramas like Short Term 12 and Just Mercy, as the filmmaker takes heavy influence from classic martial arts storytelling and authentic pockets of Asian culture to tell a stylish, but entirely engrossing, hero’s journey. Cretton and co-writers Dave Callaham and Andrew Lanham’s script inject a lot of heart and soul into crafting its titular hero, while Simu Liu is a formidable performer who easily carries the film on the strength of his natural charisma alone. Liu shares great chemistry with Awkwafina, both of whom feel very natural together as you watch them playfully take jabs at each other, like friends who have clearly known each other for a very long time, and you do feel for this character as you learn more about his rough past and what his unsympathetic father put him through from childhood, to a point where you understand all too well his pure hatred for everything his old man stands for.

Speaking of whom, Tony Leung portrays a great villain, easily the MCU’s most well-rounded since Black Panther’s Killmonger. His Wenwu, though definitely the bad guy in a lot of senses, is a very human antagonist, haunted by tragedy but consumed with so much power and arrogance that it’s blinded him to what really matters, like his family. We spend a good amount of time with him in flashbacks detailing a believable humbling that shows, were it not for all his devious acts over centuries past, he does have it within him to at least try and change his ways for the better; it’s only when his reputation catches up to him that he becomes more powerful, and more dangerous, than ever. Leung does wonders with this already well-written character, allowing the viewer to see Wenwu’s fragility underneath his toughened exterior, enough to where you are almost ready to sympathise with him before you’re reminded that he’s still the bad guy.

The script does well to keep a tight focus on the family drama around the film’s many action sequences, which is where Cretton’s strong ability to direct powerful character moments comes fully into play, though by the time we reach the third act, most of that is cast aside for the typical effects-heavy climax and exposition dumps which have plagued even some of the strongest Marvel movies. There’s still a fair amount to admire about the way it looks, not to mention the CGI being top quality, but what works so well about the film – its characters, drama, and even the unexpected reappearance of a cult favourite MCU character who’s not been seen for almost a decade – is effectively put on ice in favour of big battle sequences that seem like an obligation rather than a natural conclusion to this story. It doesn’t ruin the film, but for something that was doing well to set itself apart from most other MCU projects so far, it’s underwhelming to see it revert back to familiar patterns towards the end.

There’s more that works about Shang-Chi and the Legend of the Ten Rings than doesn’t, though. It’s a very entertaining and emotionally rich adventure with humour, charm, well-written characters, and some awesome fight sequences which all pave the way for a new hero to shine amidst the wider and ever-expanding universe of Marvel.

Shang-Chi and the Legend of the Ten Rings is a very entertaining action-adventure with stunning fight sequences, fun and well-written characters, and a solid pace which is only jeopardised by a familiar effects-heavy finale.

Shang-Chi and the Legend of the Ten Rings is now showing in cinemas nationwide – click here to find a screening near you!