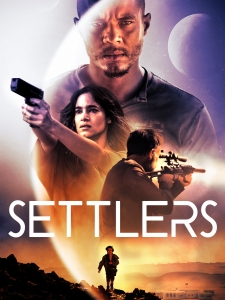 BASICALLY…: A family living on Mars must find a way to survive when their peaceful life is threatened…

Perhaps inspired by a fear of the unknown, Hollywood has made a lot of films over the years depicting Mars as a pretty crappy place to live, whether it’s The Martian, Ghosts of Mars, Mission to Mars or even Mars Needs Moms. In fairness, the red planet is pretty desolate and barren at this moment in time, but for somewhere that is being eyed as a potential location for the human race to travel to at some point in the future, there sure are a lot of things out there trying to tell us to stay as far away from it as possible.

Settlers, the debut feature from writer-director Wyatt Rockefeller – a descendant of legendary oil tycoon John D. Rockefeller, and who worked for the Environmental Protection Agency during the Obama administration – also doesn’t have the best things to say about Mars, but neither does it entirely pin the blame on the planet like so many others tend to do. The filmmaker instead uses it as a mere backdrop for a tense, dour and a little rocky sci-fi western where the most dangerous things one can encounter on this strange, desolate planet are the people you’re sharing it with.

Set sometime in the distant future, a small family – father Reza (Jonny Lee Miller), mother Ilsa (Sofia Boutella) and their young daughter Remmy (Brooklynn Prince) – have emigrated from an Earth that has apparently had its resources depleted (the adults barely remember many of the animals that used to roam the planet) to a terraformed section of Mars, where they have set up a farm with their own livestock and produce. The family’s peace is short-lived when a bandit named Jerry (Ismael Cruz Córdova) suddenly arrives and claims the outpost as his own, alleging that it once belonged to his family. Now living under Jerry’s strict and invasive rule, Remmy is left to witness her entire life crumble apart, until eventually – when she has grown into a young woman (Nell Tiger Free) – she finally decides to reclaim her own life.

The film may be set on Mars, but Settlers really could take place just about anywhere. The vast majority of this movie takes place on the family’s farm, with the reddish dunes of Mars left to serve as pretty background fodder (the deserts of Namaqualand in South Africa substitute for the red planet here), which enables the script to focus solely on the characters and the situation at hand without deviating toward heightened sci-fi territory. The closest it gets to becoming that is the introduction of a dog-like robot named Steve, which young Remmy forms a nice little bond with; other than that, the sci-fi is very much downplayed, to a point where you start to wonder why it even needed to be set on Mars in the first place, if all it was going to do was stay in this one location for most of it.

Rockefeller doesn’t get as deep into easily identifiable themes like colonialism and retribution as he might like to, but for the most part he is able to build a neat bit of tension around the skinny story he’s conjured up. Scenes where characters are just sitting in a room together, either saying or doing nothing, can be made quite unnerving because it is well-made enough movie with some sinister cinematography and subtle editing to let moments like this just naturally breathe, and because the acting by just about everyone is effective in how they look so uneasy. Brooklynn Prince, a young actress who has yet to deliver a bad performance, is very good here as her quiet and harmonious life is utterly devastated, while Sofia Boutella and Jonny Lee Miller – along with Nell Tiger Free as the older version of Prince’s character – also make the most of their screen-time.

The clear stand-out in almost every field is Ismael Cruz Córdova, as the film’s incredibly intimidating villain. Played with the cold, calculated sociopathy of Patrick Bateman with a hint of Gaston about him, Córdova’s Jerry is a very interesting character to behold; he is clearly the bad guy, not least because of all the horrible things he does throughout, but you can clearly tell just by looking at his steely, dead eyes that in his mind, he is the brooding hero of this story, and this family who he’s forced himself into is in desperate need of his (unwanted) help. Even in moments when he is committing unspeakable acts against this family, he is always convinced that he is doing the right thing, like he’s some kind of warped Clint Eastwood hero who’s “protecting” this family from certain doom. This makes his presence a lot more intense, because you really want this guy to get what he deserves, but at the same time you’re both scared and intrigued by his twisted mindset to truly see the back of him too soon.

While it is limited by its low budget to really go as far as it needs for this kind of setting, Settlers is a decently intimate sci-fi chamber piece with good enough elements to give Rockefeller a strong calling card for more ambitious things in the future.

Settlers might not go as far as it needs to with its ambitious setting and themes, but a decent grasp on tension and some stand-out performances – including an unsettling Ismael Cruz Córdova – give it some welly.

Settlers will be released on digital platforms, including Amazon Prime Video, on Friday 30th July 2021.