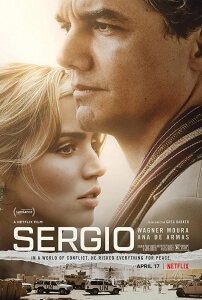 BASICALLY…: UN diplomat Sergio Vieira de Mello (Moura) puts his life in danger as he strives for peace in the aftermath of the US invasion of Iraq…

Biopics can be very difficult to master, because while it’s admirable to go through each and every one of an individual’s achievements, it’s practically impossible to fit all of them in to a two-hour running time (unless you opt to go full Irishman and make a three-and-a-half hour epic out of it, but in a world of short attention spans that’s probably not an option for you as a filmmaker). Naturally, there are some corners which are going to have to be cut, but the ones that are left need to be enticing and interesting enough to get your audience invested in the reasons why this person was worth having their life turned into a movie.

Sergio, about the slain UN diplomat Sérgio Vieira de Mello, very nearly almost reaches that point, but has all of its noble work undone by a messy structure which makes it hard to form a full connection with the guy, since it’s so all over the place that you have just as difficult a time piecing things together as the writers surely did.

For the most part, the film focuses on Mello (Wagner Moura) as he ventures to Iraq after its invasion by American forces; the task that he and his fellow diplomats, among them his lover Carolina (Ana de Armas), have before them is to peacefully pivot Iraqis towards independence while also negotiating the swift removal of the US troops. However – and this is where the film’s fluid narrative comes into effect – their building is bombed, leaving Sergio fighting for his life underneath the rubble; from there, we flash back and forth from this moment in time to some of his other achievements, including negotiating with the heads of Indonesia and East Timor to secure independence for the latter, and his blossoming relationship with Carolina.

The way that this movie is structured is rather frustrating; it will cut back and forth throughout these moments in time so often that sometimes you lose track of when exactly you are at several points, and you may even have to pause the movie just so your brain can keep with it. Giving the film such a fluid way of running things honestly leaves more holes than it fills, because not only can it make the film tonally inconsistent – an intense scene in the aftermath of the explosion will be followed by a scene of Wagner Moura and Ana de Armas making lovey-faces at each other – but it also throws the viewer off-course as they’re trying to fit all the pieces together. This is the kind of story that probably needed a straightforward linear narrative, especially when it’s about a figure who not a lot of people know that much about, because then it’d be easier to explain to the uninitiated who this guy was and what he contributed to the world; it’s like teaching a history class and then going all the way from the Cuban Missile Crisis back to the 1917 Russian Revolution within the same lesson, with zero context or much of an attempt to link the two seemingly unrelated incidents. It’s confusing, and bound to leave the audience in a more irritated state than an informed one.

It’d be one thing if the material they were working with was strong enough to warrant the looser narrative, but the writers haven’t done that stellar of a job bringing this person’s story to the big screen. The character of Sérgio Vieira de Mello in this film is mostly a bore; he’s certainly charismatic, which Moura does a fine job of replicating, but when it comes to actually depicting the stuff that he did throughout his life it’s surprisingly bland and doesn’t make for especially compelling drama. You kind of want to see things more from the perspective of other characters rather than from his, like the East Timor militants that he helps in those earlier scenes, or Garret Dillahunt as an army reserve who tries to help him escape from the rubble, or even Carolina herself because she, unlike her romantic interest, has a bit more weight in this story that you want to know a little more about (also, Ana de Armas is honestly a better actor than Moura is, and has more of a screen presence than he does). Sadly, Sérgio himself is not that interesting of a character to construct a whole movie around, which is saying something because the film’s director Greg Barker made a documentary about him in 2009 which seemed to gain some pretty strong acclaim, but it also undermines the achievements of the real person that it is based on, because people who watch this and get bored will probably think that his efforts aren’t worth looking more into, when they’re actually more fascinating than the movie gives them credit for.

If the script had been tightened considerably, with a much more solid narrative as well as a deeper look into the mindset of its titular character, then maybe Sergio could have worked; after all, nobody wants a movie about someone who literally put their life at risk to restore peace to a war zone to be underwhelming. Unfortunately, for all of its good intentions, the movie just doesn’t gel, and it’s honestly a shame because a film about someone like Sérgio Vieira de Mello could definitely work under the right creative team, but this just isn’t it. At least Ana de Armas is pretty good in the movie, and despite its script flaws it’s a well-made movie (although it cannot entirely shake off some of its made-for-TV qualities, which makes sense why this went straight to Netflix), which for a movie about someone more interesting than the movie makes them seem shouldn’t be the main takeaway one should have.

Sergio squanders its potential in its handling of the real-life story of UN diplomat Sérgio Vieira de Mello, with a frustratingly fluid narrative that confuses more than intrigues, and writing which doesn’t makes the titular character nor their achievements all that interesting, despite a touch of charisma from Wagner Moura and co-star Ana de Armas.