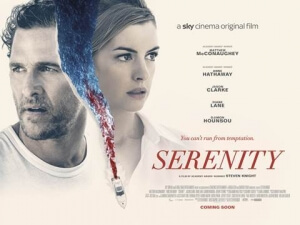 BASICALLY…: When a fisherman (McConaughey) is approached by his ex-wife (Hathaway) with a deadly proposition, he learns that things are not as they seem…

WARNING: THIS REVIEW CONTAINS MAJOR PLOT DETAILS ABOUT THIS MOVIE, SO IF YOU WANT TO GO IN COMPLETELY COLD THEN WAIT UNTIL AFTER YOU’VE SEEN THE MOVIE TO READ IT – BUT FOR ANYONE ELSE WHO’S CURIOUS, THEN READ ON; A WAVE OF INSANITY AWAITS YOU…

I realise that including major spoilers in a movie review is highly against the moral and ethical codes that the majority of critics tend to stick to when talking about new releases, but in the case of Serenity I feel like I have to talk about what happens in this movie because it’s the only thing that’s even worth talking about when it comes to this completely bizarre exercise in storytelling and filmmaking.

It’s also a movie that you may have already heard a little bit about recently due to its incredibly poor reception in the States; released in January (usually considered a dumping ground for studios wanting to bury their crappy movies), the film not only gained a plethora of negative reviews from critics with a low 21% Rotten Tomatoes score, but the $25 million-budgeted movie also opened with a dismal $4 million at the box office, and to date has only grossed $8 million after a month in cinemas. There is, however, a likely reason for why it may have significantly underperformed; US distributor Aviron ended up spending very little on advertising following very poor test screenings, and even misled lead actors Matthew McConaughey and Anne Hathaway, who had agreed to do a full press tour for the film, on the amount of interviews and promotion they were being lined up to do, so you can understand why – after the movie ended up becoming the worst opening-weekend of either actor’s careers – they came out against Aviron for essentially dumping the project. It’s done so poorly in the States, that here in the UK it has largely been delegated to the Sky Cinema service with a very limited theatrical run.

But once you read a little more about what Serenity actually consists of, you’ll wonder why anyone in the holiest of hells would want to actively promote a movie so bonkers and ill-conceived that you’ll be left asking yourself who would think any of this would be a solid idea. This is one of those bad movies that’s hard to describe without going into specific detail about what happens in it, because to write about it without once mentioned the insane and misguided twists would be just as wrong as this movie.

The film is set on Plymouth Island, a fishing community in the middle of the ocean, where McConaughey plays a character named Baker Dill – and that, believe it or not dear reader, is where things get even more ridiculous. He’s a fisherman who’s sometimes obsessed with catching a giant tuna with his friend Djimon Hounsou, and other times hustling himself for quick cash to Diane Lane, who plays such little part in the overall story that you wonder why the hell she’s even there at all. But soon, Baker Dill – it will never not be confounding that this is the lead character’s name – is approached by Anne Hathaway as his ex-wife, who wants him to take her abusive new husband Jason Clarke out on his boat and throw him in with the sharks, in a plot that seems straightforward enough – but if it was a straightforward movie, then I would not be this dramatic about it.

There is a twist in all of this – SPOILER WARNING from here onwards, if you still care – but believe me, you are not ready for any of this. No, seriously, you’re about to read something so dumb that it will literally rock your world. Ready? Here we go – it turns out that the whole thing is part of a video game that Baker Dill’s young son has created code for so that he can live out his fantasy of killing his abusive step-dad. Yes, you read that right, and no, it’s not a joke; this is a major release with Oscar-winning actors that is both written and directed by the creator of Peaky Blinders, and it’s trying to pull off stuff you would see in a really pretentious student film, the kind made by people who think they’re being edgy and avant-garde with their stylistic choices and “surprise” twists, but unbeknownst to them it’s the most banal and poorly-made entry in their entire curriculum. It’s a laughably nonsensical twist, and you can have a genuinely good chuckle upon watching how these actors are trying to execute it with the straightest of faces, when you know that every single time someone yelled “cut!” they were probably on the floor laughing about how stupid this whole thing is.

But it’s not like the twist ruined a perfectly good film, either; right from the very beginning this is an absolute trainwreck, from the dreadful dialogue to the extremely hammy performances, some of the most embarrassing in these actors’ careers, and direction that makes everyone and everything feel more stilted and alien than anything M. Night Shyamalan made between Unbreakable and Split. It is confounding that major Hollywood players signed on to do something that feels so amateurish in both its concept and execution, and the whole time you’re simply baffled by the fact that this film-noir drama has Trojan-horsed a Black Mirror episode upon us, and not even a good one at that.

This is an embarrassment for everyone involved, a major filmmaking disaster that makes you side with the US distributor for effectively dumping it into cinemas, because at least they had the right idea that as few people as possible should actively go out to see it. Skip it at all costs, unless you’re in the mood for something so bad that it’s kind of fascinating.

Serenity is an embarrassingly awful movie with some of the worst material that lead actors Matthew McConaughey and Anne Hathaway have been given to try (and fail) to make work, with a career-low for writer-director Steven Knight who provides a terrible script and amateurish direction, and with a twist that is so ill-conceived and nonsensical that it needs to be experienced with your own eyes.