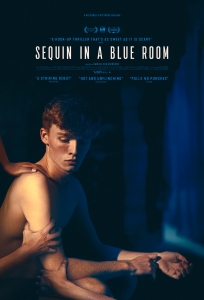 BASICALLY…: A young man (Leach) encounters a mysterious lover at a sex party, and uses a hook-up app to try and track him down…

You know you’re in for something special right away when Sequin in a Blue Room introduces itself as “A Homosexual Film by Samuel Van Grinsven”, an out-and-proud announcement that to my knowledge I’ve never seen before in front of a movie, even in some of the broader entries in LGBTQ+ cinema.

But Van Grinsven’s feature debut – which he made as his Masters project at the Australian Film, Television and Radio School – isn’t solely defined by its sexuality, nor does it need to be. No matter what, it’s an impressive first film, with a firm grip on its storytelling and character development, and which feels very timely in regards to its universality and themes that extend way beyond the mere implication of sexuality.

In the film, we follow Sequin (Conor Leach), a sixteen-year-old boy who spends his spare time hooking up with other anonymous men – many of them at least twice his age – via a discreet Grindr-like app. Sequin’s methods usually involve blocking his numerous hook-ups after the initial meeting, so as to avoid any real connection with anyone, but his thinking soon changes after he is invited to a secret group sex party at somewhere known as the “Blue Room”, where nobody swaps any contacts or names, and where Sequin becomes fixated with another man (Samuel Barrie) after striking a brief connection. Eager to find his mysterious paramour, Sequin scrolls through the app to obtain more information, but ends up becoming embroiled in much more dangerous territory, especially when an obsessive older gentleman (Ed Wightman) begins stalking the young man.

Knowing that Van Grinsven not only made this film as part of his Masters degree – technically making it a student film – but was also twenty-five at the time of making it, which is younger than even I am, makes Sequin in a Blue Room feel exceptionally impressive. Already, the filmmaker has managed to craft a narrative that’s easily within the mould of more contemporary storytelling, but gives it a unique identity which bypasses any sense of prejudice (nothing is ever made of anybody’s sexuality at any point in this movie) and just lets things unfold how they naturally would otherwise. The script, co-written by Van Grinsven and Jory Anast, isn’t afraid to explore the seedier parts within this underworld of anonymous sex and queer lust, including an intense encounter with a dominant stud which is shot and acted like it’s about to turn into a full-on horror movie, nor is it reserved about its surprising thriller elements, particularly when the stalker plot scuttles into the main narrative and suddenly gives it the weight and intensity of an Alfred Hitchcock thriller.

Importantly, though, it never loses sight of its main character’s warped journey of self-discovery, as he goes further and further down this rabbit hole of depravity from one sexual encounter to the next. While Sequin himself is deeply flawed – he has self-involved tendencies, intentionally closing himself off from others like shy classmates who invite him on dates, and even taking for granted the loose restrictions placed by his doting dad (Jeremy Lindsay Taylor) – his journey is an easily identifiable one, with his search for this mysterious guy becoming so dominant in his mind that he’s blissfully ignoring all of his school lessons just to surf the app for his and others’ profiles. It’s a very unique take on the traditional Cinderella story, in that the lovelorn Prince is searching for his unknown love with what little clues they leave behind (though, instead of a glass slipper, it’s a gay hook-up app), but Van Grinsven is smart enough not to make neither the Cinderella nor the Prince in this context seem like the blissful fairy tale characters we’ve come to expect, while Conor Leach’s excellently calculated lead performance lends great humanity to someone who, in the wrong hands, could have come across as extremely unlikeable.

Further credit goes to DP Jay Grant, who is behind some of the absolutely stunning cinematography in this film. There are shots throughout Sequin in a Blue Room which are beautiful to behold, filled with colour and neatly-lit shadows which more experienced filmmakers could only imagine of incorporating into their own films; the “Blue Room” sequence of the title is especially mesmerising, taking full advantage of its blue ultraviolet lighting and smooth, subtle uses of editing and sound design to create a near wordless segment that visually brings its story and characters forward. The cinematographer also nicely compliments Van Grinsven’s directing style, which settles on a firm stance of grounded social drama and dazzling queer iconography which never goes full camp (a trippy scene during a visit to some local drag queens invokes some interesting style choices by both cinematographer and director).

If it wasn’t already clear by now, I was quite taken with Sequin in a Blue Room; it’s a rather astounding debut with a compelling story, fleshed-out characters, and a strong grasp of its own unique identity that doesn’t cater to anyone else’s demands. Unfortunately, since it scored an official release in its native Australia last year, the film won’t be eligible for this year’s best-of list, but neither is Minari and that didn’t stop me from giving it a high grade of approval. Regardless, though, this is a very impressive film that deserves an audience which, no matter what sexuality they may identify as, can appreciate its artistic merits as well as its strong storytelling skills.

It may announce itself as “A Homosexual Film”, but Sequin in a Blue Room already has so much to be proud of.

Sequin in a Blue Room is a highly impressive debut feature for director and co-writer Samuel Van Grinsven, who displays a strong grasp of his own unique brand of queer storytelling which combines a traditional coming-of-age narrative with stylish, beautifully shot sequences of mysterious and sometimes intense encounters, all with an admirable amount of pride and confidence in itself.

Sequin in a Blue Room will be available to rent or buy on digital platforms, including Amazon Prime Video, from Friday 9th April 2021.