Selah and the Spades (Review)

Selah and the Spades (Review) 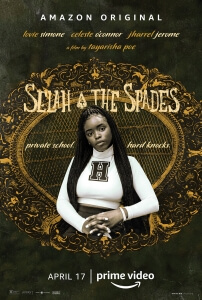 BASICALLY…: The head of an underground boarding school faction seeks a new person to replace her when she graduates…

The school clique has taken many forms in teen cinema over the years, whether it’s the cattiness of Mean Girls or the straight-up cruelness of Heathers, but so rarely have these gangs of individuals been depicted as exactly what they are: gangs. There’s always been a hint of mafia-like organisation within each of them, from the strict dress code to the levels of physical and emotional (mostly emotional) torment they inflict upon others, so the concept of a film like Selah and the Spades is intriguing because it actually explores that very idea of teens acting like full-on mobsters, albeit within a high-school setting.

When it’s focusing on that aspect, as well as the fascinating characters running it all, the movie really does shine; as for everything else, it’s certainly stylish and confident in what it wants to say, but it doesn’t quite achieve the level of sophistication it’s clearly aiming for.

The film predominantly takes place within the grounds of Haldwell, an elite boarding school where students have separated themselves into five different factions, all controlling certain elements of the school’s underground distribution system for their fellow learners. One faction deals with delivering answer sheets for tests, another is in charge of organising after-dark raves, and so on; then, there’s the Spades, a faction headed by a girl named Selah (Lovie Simone) who, with her trusted partner Maxxie (Jharrel Jerome), operates the distribution of “booze, pills, powder and fun”, and thus operates the most lucrative faction. However, with graduation looming, Selah is keen to seek out someone who can take over from her, and she soon finds that someone in Paloma (Celeste O’Connor), a budding photographer who’s just arrived at the school. Selah acts as Paloma’s mentor as she guides her through day-to-day life as the head of her faction, hoping that eventually she will be able to pick up where Selah will soon leave off.

The most enjoyable element of this film is seeing how this entire system works, from the methods of distribution they use to get their products out there (Selah and her cohorts use some of the younger members of the school as drug mules) to how these different faction heads must work off of one another; one of the opening scenes is a very serious discussion on an upcoming prank on the school’s faculty, which is treated like it’s a shareholder’s meeting at a top-tier business headquarters. Even when some of them use mafia-esque methods of violence to keep their system safe from exposure, you have to admire the elaborate planning and dedication that has gone into building this heavily interesting world, with writer-director Tayarisha Poe’s headstrong script diving as much into these practises as she can, while injecting a refreshing sense of life and even a bit of teenage cheekiness into her direction. It leaves you wanting to see more of this system and how deep it actually goes, and if reports are to be believed that distributor Amazon Studios intends to develop an original series based on the film, then it seems like those prayers are on the verge of being answered.

Opening narration makes it clear, though, that this is not a story about the factions themselves, but is more about the titular queen bee herself, and her struggles to not only hold onto what power she has, but to also secure a healthy future for both herself and the faction which she is soon to leave behind. Right away, there is something deeply fascinating about the character, and debut actress Lovie Simone’s exceptionally confident portrayal of her; she is someone who has her head fully in the game, voluntarily refusing to get tangled up with boyfriends or other typical high-school drama because it may distract her from all her hard work, but as we see on her nervous face during a couple of confrontations with her pushy mother, she is also someone who is clearly trying to please her elders without necessarily doing what she feels is right for her. She’s a character who you sometimes don’t feel entirely comfortable rooting for, but the way in which she is shown throughout is anything but two-dimensional, making her someone you can at least be interested in seeing what eventually happens to her, and once again Simone is key to making her seem a lot more layered than we may first suspect.

The world and its inhabitants are definitely strong and interesting enough to be worth a solid recommendation alone, but the movie doesn’t always make the most of its potential. There are times when certain characters are set up but are barely followed up on, if at all – the school headmaster, played by Jesse Williams, is shown to act like a police detective on the trail of these mobsters, but that plot strand doesn’t really go anywhere and honestly could have been cut out entirely – and by the time it reaches its climax, it feels like it’s either run out of things it wants to say, or it’s saving the juicier content for that proposed series. Either way, not everything introduced in this film feels like it has a solid payoff, which for a standalone film doesn’t always make it satisfactory.

Those couple of missteps aside, the movie is deeply fascinating and worthy of a watch based on Lovie Simone’s assured lead turn alone, which is strong enough to tide you over until that series spin-off gets made.

Selah and the Spades makes as much use of its intriguing high-school mafia hybrid concept as it can, though not always to satisfactory ends, and the fascinating world that writer-director Tayarisha Poe has created, as well as an extremely confident lead performance from debut actress Lovie Simone, is worth a recommendation alone.