The Secret Life of Pets (Review)

The Secret Life of Pets (Review) 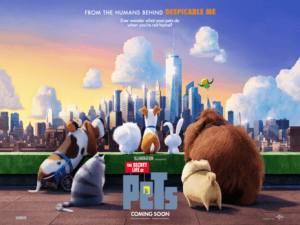 BASICALLY…: A dog named Max (C.K.), jealous of his owner’s newly-adopted mongrel Duke (Stonestreet), unwittingly forces the both of them on a journey across the city…

Illumination Entertainment, the animation company responsible for unleashing the Minions on the world via the Despicable Me franchise, actually bookends their latest movie The Secret Life of Pets with their most famous creations: a short film featuring the yellow pill-shaped creatures precedes the film, and during the end credits a character shows up dressed as – what else – a Minion. If you thought that wasn’t cross-promotional enough, Pharrell Williams’ Oscar-nominated tune Happy from Despicable Me 2 is heard playing on the radio, and – in the least subtle piece of in-film advertising in ages – a poster for their upcoming film Sing is shown prominently on the back of a bus during the film’s climax.

It seems that the company is trying to cram in as much of its other products into this film as possible to disguise the fact that there is almost nothing of value to find within The Secret Life of Pets as a whole.

If you’ve seen the trailers – though by this point, you can’t not have since they’ve been showing in cinemas for just about a year now – then you’ll know that this film is filled with cute pets doing things we expect cute pets to do, and props should go to the studio for marketing it that way since, in an age where animal videos are instant hits on social media, that’s all what anyone really wants to see. What may not be as immediately obvious, however, is how much The Secret Life of Pets is more or less a pale clone of Toy Story: Woody Max (Louis C.K.), a cowboy toy Jack Russell Terrier living with his owner Andy Katie (a barely-used Ellie Kemper), gets upset and jealous when a new toy dog by the name of Buzz Lightyear Duke (Eric Stonestreet) comes into his life, and in an attempt to get rid of him unwittingly leads both Woody and Buzz Max and Duke on a journey to get back home whilst also dodging a psychotic toy-hating owner-hating boy rabbit named Sid Snowball (Kevin Hart), while a group of other toys pets including love interest Bo Peep Gidget the Pomeranian (Jenny Slate) attempt to get them both back before it’s too late. Yes, we’re aware it’s a formula that’s existed even before Toy Story came out, and not every animated film needs to match the quality of Pixar… but at least give us SOMETHING other than a repeat of a formula we’ve seen over and over again.

That’s really what it ultimately comes down to, just another standard and unremarkable animated family film trying to be exactly like its much better peers without discovering its own identity, but missing many of the key ingredients that made a lot of them work. Charm is one such ingredient, and it sadly doesn’t come from any of the characters because quite a lot of them are rather obnoxious if not dull and bland, and honestly rather pointless. Outside of the two main characters, who even then are pretty dull and bland, every other animal whether they be part of Gidget’s rescue operation such as cat Chloe (Lake Bell), pug Mel (Bobby Moynihan) and hawk Tiberius (Albert Brooks), or even the main villain contributes nothing of real worth to the overall plot except to provide the younger members of the audience with short vignettes designed to be cute and nothing else. Even worse, a lot of them are actually rather irritating and have no definable personality to make them stand out – they are all just there because they’re pets, and pets are cute, ergo they must be cute enough to overshadow any actual character development, according to the oblivious filmmakers. It’s also a large waste of its starry voice cast, as none of them are given enough material or even reason for being there to justify their presence here – for example, there’s no reason why Hannibal Buress is voicing a dachshund, same with Dana Carvey as a paralyzed older dog, or even the likes of Louis C.K. or Kevin Hart as the main hero and villain respectively. They’re just there because they’re popular names, and because it’s all about bums on seats instead of making products of actual quality.

The film also has a serious problem with its pacing, which for an upbeat family film like this wouldn’t necessarily be a bad thing, but here it’s handled very clumsily and even confusingly. Everything goes by very fast with hardly a moment to take a breather and factor in what exactly is going on, and because there are hardly any moments that actually take the time out to further the characters’ relationships and what not, it feels like a bunch of scenes stitched together and released in cinemas nationwide in that relentless format. The pacing is sometimes so off that you’ll only realise halfway through a certain scene that you’re actually watching the climax of the film, instead of a major second-act set piece which is what it feels more like, and everything is wrapped up so fast before the first credits show up on screen that it rushes every plot thread to an abrupt finish instead of taking the time to learn any concrete morals, which – like most of Illumination’s work thus far – this film overall neglects.

However, The Secret Life of Pets also neglects to be funny, smart, engaging, respectful of its older audience, and even entertaining for anyone over the age of ten. Chances are that anyone over that age, unless they happen to be a hardcore animal lover themselves, will be bargaining for this obnoxious and charmless outing from Illumination to be put down.

The Secret Life of Pets borrows way too heavily from other successful animated films, especially entire plot threads from Toy Story, but fails to recapture what made those films good to begin with, instead coming across as an obnoxious and charmless ploy to capitalise on peoples’ love for domesticated animals, with unmemorable and even pointless characters and a pace that feels extremely off, even for a family film. Unless you’re under ten, don’t bother adopting this one.