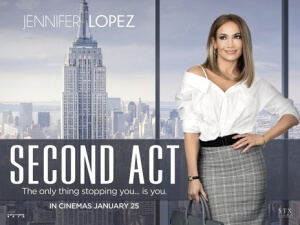 BASICALLY…: A woman (Lopez) in a low-paying job is suddenly recruited to a top cosmetics firm when they are misled into believing she is a highly qualified consultant…

Second Act is a considerably more appealing and audience-friendly project for Lopez, as both a leading lady and a producer, but while the film is serviceable enough it makes one too many out-there choices that make the events of The Boy Next Door seem more realistic by comparison.

The film stars Lopez as Maya, a woman from the suburbs of Queens, New York who is passed over for a promotion at the value supermarket she works at, despite having served as an assistant manager for the past fifteen years, because she lacks a college degree. Shortly after she turns forty, she is invited to an interview at a large cosmetics firm that has been sent a falsified resume that fabricates several things about her, including a Harvard education, and the company’s boss (Treat Williams) is so impressed that he hires her as a consultant, much to the chagrin of his daughter Zoe (Vanessa Hudgens) who also works at the company. Despite her lack of proper credentials, Maya goes for the job anyway, and soon finds her path that sees her helping the company reach new heights,  and also making some unexpected discoveries that form part of the film’s bigger, and more ludicrous, twists.

The movie is total wish fulfilment, for anyone who’s ever dreamed of acquiring the perfect job completely by accident and succeeding at it in ways never thought possible, with everything going so well that it seems too good to be true. That is especially accurate with the film’s biggest twist, revealed halfway into the movie (and no, I won’t divulge information here, because that would be extremely unethical) and will either make or break it for you based on how utterly convenient it is; you’ll either be charmed by its heartwarming execution, or rolling your eyes by how ridiculous it is, even in a film that’s as fantastical as anything you’ll find in Lord of the Rings. Either way, by that point you’ll have decided whether or not your time is being wasted on this story and with these characters, and if you’re still along for the ride then you’ll continue getting the movie that you are being promised, warts and all. Although the twist itself didn’t especially bother me – I thought that all parties involved gave good enough performances to make it reasonably tolerable – it is portrayed in a very cloying manner, with all of the clichés and tropes that come from a story like this, and direction from Peter Segal that feels a little too manipulative and pandering towards a female demographic about as much as a typical Lifetime Original Movie.

While nothing in this movie is even remotely realistic, from the reason that breaks Lopez up with her long-term lover played by Milo Ventimiglia (one of many things in this movie that could easily be fixed with a brief conversation), to the cartoonishly evil co-workers who are so mean and bitchy toward Lopez for no real reason other than it’s one of those movies, I realise that this film isn’t really targeted towards people looking for realism. Films tend to offer an escape to some audiences, and Second Act is pure escapism through and through, adopting a fairy-tale structure that nixes princesses and castles in favour of giant skyscrapers and Jennifer Lopez strutting about in fancy clothing, while never taking itself too seriously to a point to where it loses all sense of what it originally started out as (except for the third act, which again goes all out in its clichés until they become tiresome). It also helps that the acting is not that bad; Lopez, as much as some people like to poke fun at her, has proven in the past to be a very good actress in either dramas or comedies, and she does a fine job at being the likeable lead and at being game for a lot of the slapstick she has to partake in on several occasions. She has strong support from Vanessa Hudgens and Ventimiglia – both of whom Lopez shares good chemistry with – as well as a film-stealing Leah Remini who really earns many of the film’s biggest laughs as Lopez’s best friend.

However, even though at the end of the day it is pure escapism, there are still parts to this script and this story that don’t always add up, and outside of the film’s big twist there are other moments that are perhaps a little too ridiculous for anyone to to completely buy. For example, Lopez is tasked throughout the film to come up with a new all-organic product that will save the company money, and she has a lightbulb moment a little later on that paves the way for a completely out of nowhere backstory about a plant that survived the bombing of Hiroshima, and she talks about this plant as though it was the only contribution that dropping an atomic bomb on the Japanese city of Hiroshima in 1945 ever had on the world. It’s pretty crazy stuff, and again could only exist in a universe where it would be more believable if the plant actually came from an alien planet; there are several other moments like that, particularly concerning some of the pitfalls the story finds itself in once it introduces its big midway twist, and they only enforce the fact that this movie exists to be pure wish fulfilment with no footing in reality whatsoever.

But again, that probably isn’t what you want out of a movie like this, and if that’s the case then by all means enjoy Second Act as much as you can; I tolerated it enough, but could still recognise how ridiculous it really could be.

Second Act is harmless wish fulfilment that you’ll either be on board for or not, even amidst its increasingly ridiculous fairy-tale logic and a central Jennifer Lopez performance that’s decent enough to get you by a lot of its silliness.