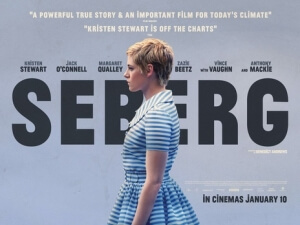 BASICALLY…: In the late 1960s, the FBI begins to target actress Jean Seberg (Stewart) due to her involvement with civil rights activist Hakim Jamal (Mackie)…

Paranoia was so high in 1960s America that the FBI set up COINTELPRO, a counter intelligence program designed to monitor, infiltrate and discredit anything and anyone they deemed to be a threat to society, no matter how harmless they really were.

One of their most high profile targets was actress Jean Seberg, an icon of the French New Wave whose financial contributions to the Black Panther Party and later romantic involvement with party associate Hakim Jamal made her a target by the FBI, which went so far out of its way to harass and publicly embarrass her that her mental state started to rapidly decline, and never fully recovered before her untimely suicide at the age of 40.

A fascinating real-life story deserves an equally fascinating big-screen treatment, but unfortunately Seberg isn’t quite the film that captures the fascination of it all.

The film focuses mostly on this aspect of Jean Seberg’s life – with the titular figure being played by Kristen Stewart – including her affiliation with the Black Panthers and her affair with Hakim Jamal (Anthony Mackie), as well as the ruthless FBI investigation that caused her to completely break down. We also get a generous look at the FBI investigation itself, as seen through the eyes of young agent Jack Solomon (Jack O’Connell) who becomes heavily involved with monitoring Seberg to a point where, unlike his fellow agents, he actually feels bad about what he’s doing.

He is really the only sympathetic character to be associated with the government in this film, and that ties into one of the film’s most glaring issues. It presents a very black-and-white portrayal of the situation, with Seberg being presented as a helpless victim and the FBI as cold, often cruel, oppressors that lack the morals which only O’Connell’s fictional character possesses. This movie wants to paint the FBI in such a villainous light that it will have one of its agents literally kick a dog to death and laugh about it afterwards, as though it wasn’t sure if we already knew that they were supposed to be the bad guys in this story. Likewise, we don’t really get to know a whole lot about Seberg herself or her reasons for suddenly deciding she wants to publicly support a political group like the Black Panthers, but it expects us to feel sympathy towards her simply because she is the main character. It’s a frustratingly empty movie that doesn’t go beyond its singular dimension, and feels like a wasted opportunity to really tell this story with any sense of weight or meaning in this day and age.

What makes it a little more disappointing is the fact that you can tell these actors are really, really trying here. Kristen Stewart, for the thin material she has been given, delivers an outstanding performance as Seberg where you can see the paranoia and insecurity growing slowly but surely in every line delivery and small physical infliction, and the actress does such a great job at showing the raw emotion coursing through her veins that it leaves you wishing that the character itself was written to be a lot deeper and interesting than the performance is. Other actors like Anthony Mackie, Jack O’Connell, Margaret Qualley, Zazie Beetz and Vince Vaughn all either try to make something out of what they have been handed to work with, or just go along with the one-note nature of the script and don’t bother bucking the movie’s trend of depicting certain characters and situations as blandly straightforward. Again, you can tell that many of these actors are definitely trying to make this work, especially Stewart, but the script just doesn’t offer them many advantages to dive much further into the roles they have been assigned, and they can’t help but feel utterly let down because of it.

It is a handsome movie – with Rachel Morrison’s cinematography bringing out the grainy side of 60s sun-drenched Los Angeles – but it lacks a truly defining soul to go along with its beauty. Director Benedict Andrews clearly wants to give it one, as does the strong ensemble he’s been given to bring these real-life figures to life, but the script just won’t budge enough to satisfy them, and sadly it comes across as a rather vapid exploration at a real-life tragedy, which I am fairly certain was not what Andrews or anyone else involved with the movie was intending to make. It’s frustrating, because you can clearly see parts of this movie that really could have worked had they had the guts to dive a bit deeper into some of these themes, these characters, and even some of the underlying facts about the COINTELPRO process, but all of that opportunity is wasted on something that’s just a thin, superficial representation of a story that’s far more fascinating than the movie itself is letting on.

Mainly, I feel bad for Kristen Stewart, who is clearly a great actress in search of truly strong material that’s worthy of her talents, but between this, Charlie’s Angels, and next month’s Underwater which is already sounding like another underwhelming affair, it appears that Hollywood has no idea what to do with her – kind of like Jean Seberg herself.

Seberg largely fumbles an interesting real-life case of the FBI’s relentless persecution of 60s actress Jean Seberg, with a script that stubbornly refuses to dig deeper than its one-dimensional portrayal of the events, wasting not only its potential but also a set of strong performances by a talented cast, especially Kristen Stewart who really does shine as Seberg herself.

Want to decide what the movie’s like for yourself?
Check out Seberg showtimes in London
via