The 2011 comedy Horrible Bosses, directed by Seth Gordon, was a big hit at the box office so naturally a sequel was, and still is, in the 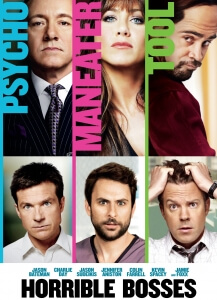 works. However, since Gordon’s departure from the sequel last month, a replacement has been sought after and now they’ve found one.

Sean Anders’ previous directing resume may include Sex Drive and the Adam Sandler flop That’s My Boy, but he’s also written for other recent comedies with writing partner John Morris – who will also join him for Horrible Bosses 2 as a producer – like We’re The Millers, Hot Tub Time Machine and Mr. Popper’s Penguins, and both are also scheduled to contribute to the Dumb and Dumber To screenplay.

Anders and Morris recently did a rewrite of the script, originally drafted by original writers John Francis Daley and Jonathan Goldstein. Those writers came up with a screenplay which saw three guys (played by Jason Bateman, Charlie Day and Jason Sudeikis) who decided to kill off their overbearing bosses (played by Kevin Spacey, Jennifer Aniston and Colin Farrell). Bateman, Day and Sudeikis are all confirmed to return for the sequel, while Jamie Foxx is also expected to return after a scene-stealing small role in that first film.

Horrible Bosses 2 is currently in pre-production, with a release date yet to be announced. But as long as the sequel remains as passable as the first one, then it should be worth checking out.