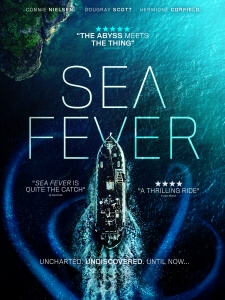 BASICALLY…: The crew of a fishing trawler fight for their lives when a mysterious parasite infects their water supply…

Yes, it seems that fate has caused Sea Fever to inadvertently resemble today’s ongoing struggles with COVID-19, which hardly anyone involved with the film could have predicted would actually become a reality at the time, so of course any parallels between what happens in this film and what’s actually happening out in the world right now is pure coincidence. That being said, it’s hard not to think about the coronavirus outbreak while watching it, because quite honestly there isn’t a whole lot else to talk about with this movie other than that, of all the knock-offs of films like Alien or John Carpenter’s The Thing, it’s merely another one of those – and that’s about it.

The film kicks off when marine biology student Siobhán (Hermione Corfield) accompanies the crew of a fishing vessel out into the open waters to study the behavioural patterns of the sea life they encounter. Siobhán already gets on the bad side of the crew when they spot her red hair – considered a bad omen in sea lore – but their troubles get bigger when a mysterious creature latches itself onto the boat, unleashing some parasitical goo which soon infects their water supply, and their bodies. With the ship’s stubborn captains Freya (Connie Nielsen) and Gerard (Dougray Scott) refusing to listen to reason and quarantine themselves and the rest of the crew to stop the infection from spreading, Siobhán takes matters into her own hands as she tries to save everyone’s lives before it’s too late.

Basically, you’ve seen this movie many times before, whether it’s Alien or The Thing or Event Horizon or even Underwater from earlier this year, which all have to do with a crew of some capacity coming face to face with an unknown entity (usually extra-terrestrial, though in the case of both this and Underwater it’s some sort of undiscovered creature from beneath the surface) and fighting to survive in the wake of its growing hold on all of them. This one certainly has an eerie claustrophobic sense to it, but then again all of these movies have that; the performances, for the most part, are fairly strong, but again all the others had some memorable turns too; it’s honestly hard to think of things about it that genuinely work because they all in some way link back to how these elements were also done just as well, if not more so, in those similar movies. I suppose what this movie does have that the others don’t is its unintentional sense of timing; once again, we’ve come right back around to talking about it having creepy parallels to the coronavirus pandemic, because there really isn’t that much material with which I can talk about this movie, other than it’s a mildly suspenseful clone of other, much more memorable movies, and its shocking links with today’s world.

This is also the kind of survival story where you don’t feel a whole lot for the people trying to make it out alive, because there’s either not much to their character or they constantly make so many mistakes that it’s hard to root for them afterwards. Despite filling the protagonist role, Hermione Corfield doesn’t have a lot to work with because she is playing a character who seems to not be very good at making strong connections with people, so she often comes across as cold and unemotional since there’s not much else revealed about her character which tells us otherwise (the only time this is hinted at is during a couple of nightmares we see her have, which are never explained). At the same time, though, she is the only person on this boat who seems to have the right idea about having everyone quarantine themselves – she is, after all, a student in the realm of science, and those are typically the kind of people you want to listen to in a time of panic, especially nowadays – because everyone else, especially the two captains (played by Connie Nielsen and Dougray Scott who appear to be mourning the unexplored loss of their child, a plot point which disappears as soon as it arrives) who constantly make things so much worse by not listening to reason and insisting that everything remain on course, even when it becomes blatantly obvious that they cannot simply return to normality with a deadly parasite on the loose. The whole predicament they end up in is basically Dougray Scott’s fault, because he decided to venture into restricted waters even after being warned against it, and despite later dialogue that hints at remorse for his stupid mistake it comes far too late in a story that so easily could have been avoided, had these people used any of their common sense.

While it’s pretty clear that I wasn’t a huge fan of this film, I will say that there are times when the cinematography is not bad, especially scenes set within the gloomy belly of the ship – but once again, I can say the exact same thing about almost any movie that’s trying to use the Alien formula. There just wasn’t anything to it that really stood out for me, and what little there was that actually did I was just picturing in my head a much better movie that did all of the same things; the only unique thing that one can truly give this film is the fact that it unintentionally resembles our current COVID-19 predicament, but even then there’s so much you can say about it without repeating yourself. I suppose it’s worth a rental, if you’re in the mood for something that’ll give you a decent amount of suspense, but for me personally this was an unoriginal waste that should be left to drift out into the unknown.

Sea Fever suffers from unavoidable comparisons to movies like Alien and The Thing, because there’s little else to it that really stands out – other than its unintentional similarities to the ongoing COIVD-19 pandemic – which you can use to set it apart from the others.