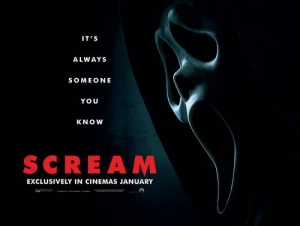 BASICALLY…: A new killer assumes the Ghostface costume and begins a new murder spree in the town of Woodsboro…

In 1996, horror filmmaker Wes Craven rewrote the book on slasher movies with Scream, an enormously successful and acclaimed film that comedically highlighted the conventions of the typical serial killer flick while also being a pretty entertaining movie in its own right. Twenty-five years and three sequels (as well as a short-lived TV adaptation) later, not to mention seven years after Craven’s passing, the slasher genre is revitalised once more with, erm, Scream, which like the original is destined to be remembered as a sly commentary on the attitude towards modern horror amongst impressionable youths, and also as a pretty fun and clever sequel which, in true Scream fashion, wears its self-awareness on its sleeve.

Ready or Not directors Matt Bettinelli-Olpin and Tyler Gillett fill in for the late Wes Craven on this fifth entry in the franchise, and already the dark playful nature of that film is evident in the opening scene; as per Scream tradition, it opens with a young woman – in this case teenager Tara Carpenter (Jenna Ortega) – receiving a threatening phone call from the masked killer known as Ghostface, who wants Tara to partake in a deadly game of horror movie trivia; unfortunately, it ends rather bloodily for the poor teen. The attack sparks the return of Tara’s older sister Sam (Melissa Barrera) to the town of Woodsboro, with doting boyfriend Richie (Jack Quaid) in tow, as she tries to pinpoint who amongst her sister’s teen friends might be the culprit before they can kill more innocent folks. Along the way, they are assisted by familiar faces such as previous Ghostface survivor Sidney Prescott (Neve Campbell), reporter Gale Weathers (Courteney Cox) and retired Sheriff Dewey Riley (David Arquette), who each bring their unique expertise, and knowledge of slasher movie lore, to the battle against this new killer.

As with all four previous Scream movies, the main satirical target of this entry is what the current trend of horror movies is at this point in time, and here the focus is on the “re-quel” phase, or the rebooting of a dormant franchise that continues the established story but with newer characters. Think of recent movies like the 2018 Halloween, Star Wars: The Force Awakens and Terminator: Dark Fate, which like this new Scream settle into familiar patterns but with newer protagonists interacting with “legacy” characters, so as not to anger fans and also bring in newer audiences. Scream circa 2022 has a lot of fun picking apart the conventions of what makes a modern re-quel, including the expectations placed upon it by fascistically toxic fandoms who want things to be one way or nothing at all, and directors Bettinelli-Olpin and Gillett are sly enough to comment on the pitfalls of such a trend while also being the exact kind of re-quel it is sending up, but still keeping the levels of suspense high with plenty of gruesome kills and sharp witty dialogue.

It is also fun to see how the film commentates on a newer brand of horror that has all but made the slasher genre obsolete. Most of the teens in this movie aren’t familiar with the traditional rules of slashers because they’re more interested in “elevated horror” such as The Babadook, Hereditary and It Follows, which offer much more complex chills than the typical jump-scare-a-thons that fill more seats, and so the idea of it simply being a person in a mask going around and stabbing people is an unfathomable concept for them. The Scream movies in general have made it their mission to comment on the nature of Hollywood franchising in general, with the third one in particular going perhaps too extreme in its meta commentary on the system, and this one does too but from much more of a consumerist perspective, taking into account the gravitation towards a more thoughtful brand of horror that mirrors the audience’s taste buds for the genre over a recent period of time. It’s fun to watch, and again the filmmakers are having a blast with the way they treat all areas of horror without being too condescending or cynical towards any of it; like Wes Craven did back in the day, the new directors pay loving tribute to the genre by both acknowledging and acting out the tropes and structures we all know and love.

Beyond its wild commentary, the movie is a blast to watch because you’re really invested in these characters, both old and new, and the kills themselves are among the most gruesome yet performed in this series. Among the older characters, it’s series MVP David Arquette who stands out the most, as the down-on-his-luck yet utterly lovable Dewey in his most profound outing as his most famous character yet; his scenes with real-life ex-wife Courteney Cox, also having fun reprising her role, do have a melancholic quality to them when you know more about the actors’ history both in front of and behind the camera, and while Neve Campbell perhaps has the least amount of screentime between the three main legacy characters, it’s cool seeing her again as Sidney Prescott. As for the newer characters, there are plenty of likeable standouts; Melissa Barrera is very good in the film, and shares strong chemistry with an equally charming Jack Quaid (who between this and The Boys is a master at playing the lovable straight man) and other characters who, for spoilers’ sake, won’t be explicitly mentioned here. You certainly don’t want to see any of them meet their somewhat inevitable fates at the hands of Ghostface, who has never been more threatening in this series as they dish out some very gory and wince-inducing stabs, towards victims who will no doubt be very shocking to long-time fans of this series.

Overall, the film is a lot of fun, with its clever satire, likeable characters, gory kills, and witty self-aware humour that helps it rank high among the divisive sequels in this series. As in the previous Scream movies, you can feel the love for the horror genre from all angles and pays enormous tribute to them as well as the legacy that the late Wes Craven left behind (the end credits begin, fittingly enough, with “For Wes”). It is, dare I use this pun, a scream.

Scream is a hugely entertaining slasher sequel which takes aim at the current “re-quel” trend and other modern horror aspects, but like the previous films it does so with clever satire, likeable characters both old and new, gory kills, and a real love for the genre that will please both fans of the series as well as horror-lovers in general.

Scream is now showing in cinemas nationwide – click here to find a screening near you!