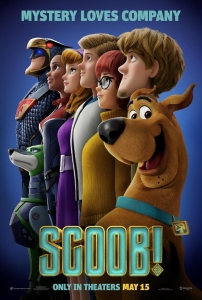 BASICALLY…: Scooby-Doo (Welker), Shaggy (Forte) and the other Mystery Inc. members find themselves in a fiendish plot to unleash a powerful enemy upon the world…

For over fifty years, four meddling kids and their mangy talking dog have solved mysteries across multiple platforms, from cartoons to live-action movies to video games and beyond, becoming an iconic franchise amongst the many Hanna-Barbera properties out there. I was one of the many kids back in the day who used to watch a fair amount of the adventures of Shaggy, Fred, Velma, Daphne and Scooby-Doo either on video or on TV, including the many direct-to-video animated movies that they’d put out (and yes, I am also one of those people who still gets nightmares from Scooby-Doo on Zombie Island), so any new property that features the Mystery Inc. gang is immediately going to at least get me a little bit interested.

My interest was thus piqued by SCOOB!, the third major feature-length film adaptation (following the two James Gunn-scripted live-action movies) which was also said to incorporate other characters from within the Hanna-Barbera universe for the first time in a film. The initial thought that I had was that this makes a fair amount of sense to do; back in the day, Hanna-Barbera used to do large crossovers with their cartoons all the time, from Scooby’s All-Star Laff-A-Lympics to Yogi’s Treasure Hunt, so to do something like that on a much grander and more cinematic scale wouldn’t be entirely out of place.

However, the price for it being a fairly decent Hanna-Barbera universe movie is that it’s not an especially great Scooby-Doo movie, because when you break this movie down it could have been about any one of the many characters under this particular banner; it just happens that they chose the characters of Scooby-Doo, because they’re the most iconic of the bunch. Other than that, this is a sub-par adventure for Mystery Inc themselves.

We don’t even follow the whole gang around that much, because aside from an extended prologue that sees the origins of their mystery-solving business, Fred (voiced by Zac Efron), Velma (Gina Rodriguez), Daphne (Amanda Seyfried), Fred (Will Forte) and Scooby-Doo (Frank Welker) spend most of the movie apart from each other, because Simon Cowell, of all people, refuses to fund their business unless Shaggy and Scooby are out of the group. The two of them, however, are soon drawn into a plot by the evil Dick Dastardly (Jason Isaacs) to enter the Underworld and unleash the three-headed dog Cerberus upon the world, and they must team up with superhero Blue Falcon (Mark Wahlberg) and his trusty sidekick Dynomutt (Ken Jeong) to stop Dastardly from causing chaos.

The film shares similarities with the Tom Cruise-starring The Mummy from a few years ago, in that it’s trying to be many things at once – a launching pad for a cinematic universe, a straightforward action film, and a standalone film featuring these characters – and ends up feeling like a jumble of ideas instead of a collective whole. It definitely seems like a corporate studio product, especially in the numerous ways it makes references to pop culture and modern slang that today’s youth will understand more than adults; among the many references this movie makes are Netflix, Harry Potter, Kelly Clarkson and the word “hashtag”, which more often than not come across as pandering towards younger children than anything genuine. As a Scooby-Doo movie, it’s a mixed bag; it’s as though the writers wanted to both honour the legacy of the original cartoon – right down to recreating the original opening title sequence almost perfectly – but also be cynical towards some of its recognisable tropes (someone describes Shaggy as being what a middle-aged man thinks a teenager is), but the attitudes don’t really go together all that well, because you’re never entirely sure what kind of tone this movie is setting itself. We barely even get to know many of the new iterations of these classic characters, because the movie goes along at such a fast pace with barely a pause for breath that it leaves little room for them to really be defined in their own ways, not to mention that there are tons of other characters to introduce and set up for potential future movies.

Speaking of which, the movie ironically works best when it’s not focusing on Scooby-Doo and his friends; it’s far more interesting to see this world where Hanna-Barbera characters just exist, leading to appearances from people like Captain Caveman and Dick Dastardly (don’t worry: the movie does cover where Muttley is), and lots of background in-jokes like arcade games named after the Laff-A-Lympics. In a much more focused movie, those elements could be fun in their own right, but when they’re all crammed into something that’s also meant to be something else entirely, it feels like they played their cards way too soon. It really is just like how The Mummy turned out, except unlike that movie this one isn’t by any means going to appear on my Worst of 2020 list; there are a couple of laughs and creative sight gags here and there, and some of the voice cast are clearly having fun going over-the-top as these (literally) cartoonish characters – Jason Isaacs as Dick Dastardly, especially – but ultimately SCOOB! is just the latest victim of studios trying too hard to do what the Marvel Cinematic Universe managed to do so well, only to fail to grasp what it truly was that made those inter-connected films work; a soul, for one.

SCOOB! tries way too hard to establish a Hanna-Barbera universe, and sometimes it’s fun to explore this world, but it doesn’t manage to do much justice to its own standalone narrative in the process, with its iconic characters mostly just being secondary in a rather messy, and in some ways soulless, family movie.

Want to decide what the movie’s like for yourself?
Check out SCOOB! streaming links
via