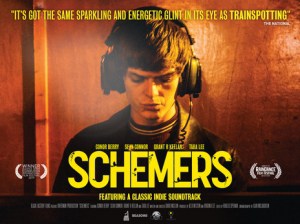 BASICALLY…: A young dreamer (Berry) begins promoting music gigs, which puts him on a collision course with a local gangster (Mills)…

While not exactly a household name, music industry player Dave Mclean has nonetheless led a career of respectable achievements. The Dundee native started his career as a relentless music promoter in his hometown, before moving to London and forming a business that saw him promoting some of grunge’s biggest names like Nirvana and Green Day, which has earned him a nice amount of wealth and a small amount of notoriety.

His ambition now seems to stretch into the world of film-making, for he not only directs, produces and co-writes Schemers, but he’s shaped it around his own early experiences as a young man just entering the music business. Now, when someone of considerable – but not domineering – power decides that they want to make a vanity project about their own life, there has to be a number of things they need to bring to the table beyond their ego in order for it to work in the eyes of audiences: a compelling story, for one, or decent characters, or a unique style that sets itself apart. Unfortunately, Schemers has none of that, and we are ultimately left with a vanity project made for nobody other than Dave Mclean.

As mentioned earlier, the film is an account of Mclean’s early days as a music promoter; after a leg injury forces him off the football field, young Davie (Conor Berry) conspires to create his own disco in order to impress local nurse Shona (Tara Lee), which soon leads to him and his friends starting to book live bands such as Deep Purple, using his negotiating skills to nab them at an affordable price. When Davie’s ambition eventually leads to him securing a gig for Iron Maiden, he and his pals butt heads with local gangster Fergie (Alastair Thomson Mills) who controls the local music venues, and now Davie will need to do everything in his power to ensure that the gig goes as well as it can.

Almost right away, you can tell that Mclean simply watched Danny Boyle’s Trainspotting over and over, and decided to emulate that film’s unique look and style for his own, far lesser outing (simply swap Edinburgh for Dundee, and drugs for music, and you pretty much have a near-identical rip-off). Like Boyle, he incorporates lots of editing tricks like constant freeze-frames, photo montages, reversed footage, and endless, often unnecessary narration from its lead character, but Mclean fails to add anything substantial to match the clear stylistic ambition, even if it is heavily stolen. The editing here only serves to cover up its blatant lack of budget, which you can tell from scenes where supposedly sold-out venues look like they only have a handful of people attending, camerawork that heavily favours close-ups and barely establishes many of the settings around them, and sound recording that makes it seem like they didn’t even have enough money to afford a quality microphone for some shots (the background noise in exterior scenes often drowns out the dialogue we’re supposed to be listening to). Based on all of that, it should neither surprise you nor comfort you that Mclean has not made a movie before – if you look on his IMDb page, this is the only film listed in his credits in all categories – and for all his past success and apparent wealth, someone like him should have known better than to make something that looks and feels so amateurish.

Shoddy filmmaking aside, the movie just doesn’t work on a conceptual level either. A movie can definitely be made about a young man’s rise in the music promoting business – and judging by how many other movies it constantly feels like a lesser version of, it probably has been already – but you have to give your audience a reason to care in the first place, and Schemers neither offers an interesting enough plot to keep you hooked, or even likeable enough characters to hold it together. For someone who is clearly the main creative force behind this vanity project, Mclean has somehow managed to make his own on-screen counterpart the least sympathetic person in the bunch; Davie is a screw-up, but not in a charming way as he is constantly causing trouble by sleeping with other people’s wives, gambling away his life-saving cash at the races, and treating his supposed friends – including his love interest, with whom he has very little chemistry – like utter garbage half the time, even when it is very obvious that he is the problem. You don’t really like this guy because he’s an obnoxious and smug pain to be around, and because the acting by newcomer Conor Berry, unfortunately, isn’t good enough to sell you on his devious nature. Most importantly, though, you have no reason to care about his ambitions or where he eventually ends up, because the movie doesn’t do a very good job at giving you a reason for being invested in any of this.

For all his achievements in the music industry, Dave Mclean is not a film-maker, and it’s plain to see that he’s reached his limit by stepping his toe into a field he really doesn’t have the chops for, nor even the grace to let a more experienced writer and director handle the narrative for him. Instead, by going at it himself, he’s made a noticeably shoddy vanity project with very little charm, intrigue or wit, and appears to only have been made so that Mclean can claim to have made Dundee’s answer to Trainspotting. Dundee, however, deserves better.

Schemers is a flat, empty vanity project for director/producer/co-writer Dave Mclean, who tells his own coming-of-age story with none of the same charm or visual wit that his clear influence Trainspotting managed to achieve, nor does he give you any reason to care with an uninteresting story, unlikeable characters, and an alarmingly amateurish production quality.

Want to decide what the movie’s like for yourself?
Check out Schemers showtimes in London
via