Scary Stories To Tell In The Dark (Review)

Scary Stories To Tell In The Dark (Review) 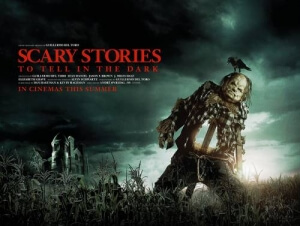 BASICALLY…: A group of teenagers in late 60s America are haunted by figures in a book of scary stories…

Shortly after author Alvin Schwartz finished his book series of children’s horror tales entitled Scary Stories To Tell In The Dark in 1991, RL Stine came into the picture with his own line of spooky stories intended for younger audiences, which he called Goosebumps. Those books really took off in popularity, while Schwartz’s tale began to fade a little more into obscurity, with many children who read his books remembering more the creepy illustrations than the stories themselves.

Things have now come full circle, as not only is the feature-film version of Scary Stories To Tell In The Dark coming after the Jack Black-starring Goosebumps adaptation (which even spawned last year’s sequel), but its basic set-up is eerily similar to that of the other movie. In more confusing terms, the rip-off seceded the original, causing the original to rip off the rip-off, which in and of itself ripped off the original.

It’s alright if you’re confused by that last sentence, because much like the movie itself it helps if you don’t think about it too hard, and if you just sit there and watch something play out in a silly but effective manner.

Taking place in a small Pennsylvania town called Mill Valley (twinned with Hill Valley from Back to the Future, apparently) around Halloween in 1969, a group of young friends – aspiring horror writer Stella (Zoe Colletti), goofballs Chuck and Auggie (Austin Zajur and Gabriel Rush respectively) and drifter Ramón (Michael Garza) – decide to pay a visit to the abandoned mansion that once belonged to the Bellows, a prosperous family that was famous in the community. There, they find a secret room containing a book by Sarah Bellows, who was said to have poisoned the local children and was subsequently ostracised from the family, which contains a collection of scary stories that she wrote. However, the friends soon discover that the book is starting to write new stories, with each of them as characters being pitted against the frightening monsters being conjured up – except, the stories are actually happening in real life, and won’t end until they can find a way.

Having absolutely no memory of reading the books myself, I feel comfortable in saying that the Scary Stories To Tell In The Dark book series was never as popular here in the UK as it was in the States, with many of us young Brits opting for – what else? – Stine’s Goosebumps series instead, so as an adaptation of the actual stories I have no idea if the ones depicted here are accurate or not (although from what I hear, they’re faithful almost to a fault). However, I have seen both of the recent Goosebumps movies, and I can definitely say that as a more intense and significantly more adult adaptation of those films, it’s pretty solid; sure, it has a similar plotline, right down to the book(s) of the title coming to life to scare the mostly young protagonists, but it does a fine job at treating the audience more like adults and not sugar-coating any of the scares it brings to the table. This movie can be best described as if the Goosebumps films were made around the same time as Gremlins or Poltergeist, when these kinds of horror films would go for broke in trying to scare its target audience of largely teens, but still be accessible enough for that demographic to feel as though they’re treated with respect like their older peers. There are scenes where characters do indeed bite the dust, often in pretty disturbing and gruesome ways, and there aren’t any quick and easy fixes which a much safer teen-friendly horror flick would try to do; when someone is gone, they are gone, period. I respect this movie for not playing it entirely safe for the sake of its target audience, as well as director André Øvredal – along with producer Guillermo del Toro – for putting in some effective scares that actually do leave your skin feeling a little prickly afterwards (a scene starring the creepily-designed Pale Lady is a major highlight, just for how it is shot, paced and designed).

The movie isn’t necessarily deep, with some of the characters feeling thinner than others, and some of the turns in logic are ones that you do find yourself questioning once or twice, but this movie’s goal isn’t to provide a complex and emotionally gripping narrative; instead, it’s designed to be a scary experience for the audience, and in that regard it succeeds far more than it doesn’t. I can definitely see this movie slowly becoming a cult favourite amongst teens looking for that perfect new movie to play on Halloween night (which begs the question, why wasn’t this released in late October instead of mid-to-late August? Yes, there’s Terminator: Dark Fate and Doctor Sleep scheduled for around then, but this would have easily felt at home during that time as well), and for adults it’s a fun time as well, especially for those who actually do remember reading the original books. It’s a fun movie to get some legitimately effective scares out of – although sometimes there is some unconvincing CGI work on some of the monsters, which make the ones brought more to life by practical effects all the more impressive – and the ways in which it’s directed, acted and shot are solid enough for you to enjoy yourselves even more.

In terms of which one I’d pick to watch again, either this or Goosebumps, there’s no contest as Scary Stories To Tell In The Dark is by far the most effective – I guess there’s still some life in the original to compete with the rip-off after all.

Scary Stories To Tell In The Dark is an effective and entertaining horror film that respectfully doesn’t play things too safe for the sake of its target teen audience, containing the intense scares and solid execution that any decent horror film should have.

Want to decide what the movie’s like for yourself?
Check out Scary Stories To Tell In The Dark showtimes in London
via