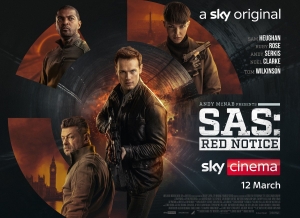 BASICALLY…: A group of criminals hijack a train underneath the English Channel, and it is up to SAS operator Tom Buckingham (Heughan) to save the passengers and stop the villains…

Perhaps I’m not in the right frame of mind to be reviewing SAS: Red Notice. This is because, the night before I finally was able to watch and review this film, a peaceful vigil for Sarah Everard – the 33-year-old woman who was abducted and murdered by a Met Police officer earlier this week, and whose death has sparked wide conversations about both violence against women and toxic masculinity in general – was brutally disrupted by hordes of police who detained a number of (mostly female) protestors.

Having watched this film immediately after absorbing this devastating news, it made me feel a little nauseous afterwards; specifically, the sight of seeing armed forces violently opening fire and using brutish physical force against female antagonists. This is obviously not the fault of the film itself, because even it couldn’t have predicted such a tragic event taking place the very week of its release, but it honestly really sullied the whole viewing experience for me, so I’m not sure if everything that I have to say about it going forward will be said in the most objective of manners.

That being said, I do think that there are fundamental flaws to this movie that stretch beyond its awkward timing, including a generic script with some seriously psychopathic undertones that I’m slightly worried might only be feeding the very kind of toxic masculinity that people have been protesting against recently.

Based on Andy McNab’s novel Red Notice, the film’s hero, played by Sam Heughan, is – get ready for this – Tom Buckingham, a name that’s more British than Paddington Bear having scones and tea with the Queen. He is also apparently Bruce Wayne, since he comes from an extremely wealthy background, with both parents dead, and even has his own butler to confide in; however, instead of fighting crime dressed as a bat, he’s a lethal SAS operative who’s known in his field for his ability to easily switch from charming gentleman to emotionless killer. Unfortunately, he runs into some bad luck when he plans to propose to his girlfriend Sophie (Hannah John-Kamen); travelling by Eurostar to Paris for the big moment, the train is suddenly hijacked by an armed militia force known as the Black Swans, led by a woman named Grace (Ruby Rose), which traps the passengers underneath the Channel Tunnel as hostages, negotiating with response teams for a hefty pay-out or else they’ll blow everything up with a secret gas pipeline. However, before you can say Die Hard, Tom goes full John McClane as he escapes the villains’ clutches and takes them on one by one, saving not just the hostages – with his beloved Sophie among them – but hopefully the day as well.

Loud, inept, and basically unengaging action dominates SAS: Red Notice, riddled with predictable clichés and humourless characters that somehow feel thinner than they probably are on the page. For a movie that is basically Die Hard on the Channel Tunnel, it’s not as exciting as it sounds, since most of it takes place in a darkly-lit underground environment that’s rather non-thrilling to look at, while sub-plots about government cover-ups, potential traitors (complete with all sorts of red herrings, until they narrow down to the most likely suspect) and something about a massacre in a small Georgian village, all add up with little value outside of generic action set-pieces. Actors like Tom Wilkinson, Noel Clarke and Anne Reid are all wasted in small roles unworthy of their talents, while it’s left to others like Andy Serkis as a gruff Cockney commander and ex-Batwoman Ruby Rose – apparently auditioning for the next Lisbeth Salander in both her hairstyle and sociopathic personality – to chew scenery left and right while Sam Heughan blandly strolls his way through the de facto action lead part.

However, it’s the film’s promotion and celebration of psychopathy that really leaves a bad taste in its mouth, regardless of what tragic events have occurred in the past week. Andy McNab, a self-described psychopath thanks in part to his former military service (he even co-wrote a book called The Good Psychopath’s Guide to Success, in which he argues about the useful nature of a “good” psychopath in society), has essentially created a character like Tom Buckingham – I still can’t get over how hilariously over-the-top British that sounds; that’s like naming your all-American action hero Freedom McDonalds – who will kill or subdue any enemies without so much as a flicker on his face, and we’re supposed to get behind this guy even though he shows no empathy and thus no humanity throughout the entire movie. His girlfriend’s whole arc is about her understanding his psychopathic nature, and by the end she is practically egging him on to kill every last one of them because it’s what he does best, which is a very worrying trait for a lead action hero who we’re meant to like and support. I know that it would be an even lamer action movie if he were not to kill anybody, but at the very least give him some form of humanity that’s identifiable for the audience to feel comfortable rooting for, especially someone who displays such concerning personality traits as McNab’s creation does.

It’s not a movie that I’m particularly keen on revisiting in the future, mostly because it’s the kind of action film that goes into some particularly nasty places that don’t sit right with someone of my sensibilities, though I can understand the appeal to audiences who just want a rough, tough movie to put on during a quiet evening in. I’m not personally part of that crowd, but if you are then chances are you’ll probably enjoy it more than I did; then again, maybe I’m just too caught up in current events to really be in the right mind frame for a movie that celebrates psychopathy and toxic masculinity like this.

SAS: Red Notice is a mostly forgettable action-thriller with some less-than-engaging action, bland and sometimes unintentionally funny characters, and a waste of some talented British actors, though it is the movie’s apparent celebration of psychopathy and toxic masculinity that leaves the bitterest taste, especially in the wake of recent events.