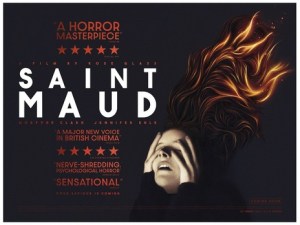 Whenever a horror film contains heavy religious themes, it’s usually about a spiritual demon that needs to be exorcised, before it can fully possess the body of its host. No such cliché abounds Saint Maud, which instead opts for the idea of religion itself – or in this case, one person’s increasingly warped view of it – being the true demon, in a nail-bitingly tense and profoundly original horror that examines the danger of being way too wrapped up in one’s faith.

The debut feature of writer-director Rose Glass concerns a young woman named Maud (Morfydd Clark), who has recently devoted her life to Christianity after what is heavily implied to have been a rough past (it’s never exactly spelled out what happened, but judging by the overall decor and lighting scheme in its brief prologue, something went down). Having accepted a job as a live-in nurse for dying former choreographer Amanda Köhl (Jennifer Ehle), who has lived – as Maud interprets it – a life of hedonism, from her alcoholism to her late-night hook-ups with young girlfriend Carol (Lily Frazer). Maud thus decides that her mission is to help Amanda see the light, and save her soul before her eventual passing, but it’s increasingly clear that within Maud’s supposedly devout persona is a seriously disturbed psyche with obsessive and seriously questionable delusions of spiritualism.

Maud, who is rarely ever off-screen, is a truly terrifying horror movie character. She isn’t malicious or blood-hungry like Michael Myers or Jason Voorhees, and despite claiming to have a personal connection to God (which becomes more and more personified as the movie goes along) there’s no apparent supernatural entity taking over her, but her terror comes from a sinister misguidance over her own faith which, as we have seen countless times on the news from acts of terrorism to mercy killings within family members, has the capacity to be extremely dangerous. As we all know, religion plays a huge part in many peoples’ lives, and the vast majority of them use their faith as an example to simply be a good person; Maud in this film represents the isolated few who perhaps uses it as an excuse to tell themselves that what they’re doing is ultimately for the greater good, but has gotten things so twisted that their good intentions ultimately result in more harm than good. There is something seriously unsettling about her composed, graceful manner, as though at any moment she’s about to snap and either scream in somebody’s face or beat the unholy crap out of them – all in the name of a higher power.

A stunning lead performance also drives home the character’s seriously unsettling nature. Morfydd Clark is fantastic here, as she gives Maud a number of thick layers to keep the true essence of her character covered up; you don’t just fear her, but you also sympathise with her in some way because, as warped as her world view may be, she is clearly trying to lead a life that brings as much hope and faith to others as it does to herself, and the few hints we do get of what she used to be like – hint: Maud may or may not be her actual name – make us feel all the more sorrowful as we see her become more and more consumed by her own tormented soul. It is, at the end of the day, a character study of a truly disturbed person, whose strong devotion to her faith ultimately makes her a force to be reckoned with in all the wrong ways, and Clark delivers such a compelling performance that allows you to track her character’s journey right up to the haunting final shot without getting side-tracked by some unnecessary jump-scares or the like.

Glass, incidentally, plays with the audience’s expectations of horror in a film that combines the psychological with the physical, often with grisly and hard-to-stomach results. You’ll wince as Maud takes her mantra to “never waste your pain” all too literal, as she kneels onto non-popped kernels and – in one of the film’s most chilling sequences – embeds her feet inside shoes with nails in the soles. You’ll be creeped out by small things like the hundred-yard stare of its lead or the gloomy landscape of the seaside town it’s set in (captured effectively by cinematographer Ben Fordesman). Most impressively, you’ll be legitimately set back by the few actual jump-scares this movie has later on, which are not only earned but – unlike a lot of lesser horror flicks – actually make sense within the context of the story and characters. It is an impressive debut for Glass, who with one film manages to set out everything from a sustainable situation to its complex characters to a wisely selected number of actual scares and disturbing imagery in ways that many other filmmakers past their prime would struggle nowadays to accomplish – and all at just under ninety minutes, no less.

It’s a movie that lingers in the mind long after you see it, because its themes of religious misguidance and a lead character who embodies how dangerous something like that can be towards others but also towards their own psyche are frightening enough on their own, but to see them played out with some of the most chilling imagery you’ll see in a horror movie all year, it’s an entirely different entity.

Saint Maud is a chilling and impressive debut for writer-director Rose Glass, who plays around with certain horror conventions to deliver a disturbing tale of dangerous extremism in the name of religion, with a fantastic lead performance by Morfydd Clark who delivers a compelling character that’ll haunt your prayers for days to come.