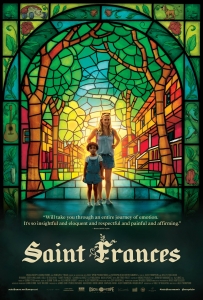 BASICALLY…: When she makes a life-changing decision, a deadbeat nanny (O’Sullivan) forms an unlikely bond with the six-year-old she’s charged with protecting (Williams)…

In one of the very first scenes of Saint Frances, protagonist Bridget – played by Kelly O’Sullivan, also the film’s writer – wakes up after a one-night stand to find menstrual blood all over the place, from her bedsheets to even parts of her and her night-time partner’s faces. Had this movie been made about ten or fifteen years ago, this would unquestionably be portrayed as gross-out humour, with the “joke” being about how disgusting it is that girls sometimes bleed naturally from the vagina; instead, the moment is played out as just a moment, which they very quickly get over and even make light jokes about it without once expressing any hint of disgust.

It’s also a moment that aptly lends itself to the rest of the movie, in the sense that it takes heavy topics and themes which not that long ago would have been a source for easy and cheap laughs, and makes something thoughtful, respectful and even sweet out of it all.

O’Sullivan’s Bridget is a thirty-something woman with no real direction in her life, barely making much in her job as a restaurant “server”, and sleeping around with a bunch of guys without much in the way of birth control. Despite her lack of personal progress, she applies to become a nanny for lesbian couple Maya (Charin Alvarez) and Annie (Lily Mojekwu), whose precocious six-year-old Frances (Ramona Edith Williams) needs looking after whilst they prepare for the arrival of their latest child. At first, naturally, the two don’t get along with Bridget’s awkward child-minding skills clashing with Frances’ matter-of-fact sass, but when Bridget suddenly discovers that she herself is pregnant and promptly decides to abort, it makes her start to finally take on some personal responsibilities, starting with being the best possible nanny she can to her young ward.

It’s certainly a plot you’ve seen many times before, with the child-and-guardian buddy-up which grows stronger as the movie goes along, but O’Sullivan’s script goes places you normally wouldn’t expect in a movie like this. This is a film where characters share frank discussions about abortion, menstruation and even post-partum depression, and it approaches these topics in ways that are both funny and also very touching at the same time. You feel the weight of these characters’ situations, but you also don’t feel too guilty about laughing during any of it either, because the script manages to balance the tone rather well to ensure you have a very human reaction to these very real scenarios without leaning too heavily towards the wrong emotion. In doing so, there’s a certain level of charm added to the story which could easily have been downgraded to American Pie levels of gross-out adult humour, but is instead treated with respect and real-world sensibility that makes it far wiser beyond its years.

As the first feature credit for both O’Sullivan and director Alex Thompson, this stands as a confident and self-assured debut that wisely sidesteps certain clichés to deliver both a provocative and surprising character-driven drama, and a sweet coming-of-age comedy where it’s not necessarily the six-year-old who needs to grow up. On-screen, O’Sullivan radiates charm and charisma as Bridget, and shares some adorable chemistry with impressive young actress Ramona Edith Williams, who narrowly avoids Full House-esque annoying kid tropes to bring a naturalistic spark of life to the movie. O’Sullivan’s performance, along with her script, proudly announces an intriguing new voice in post-modern storytelling, where she dives deep into some very tricky material and finds a way to show it without being too judgemental or condescending to anyone else; a confrontation with another local mother about public breastfeeding avoids a free-fall into total “Karen” territory by both humbling and humanising the accusatory party while also calling them out on their passive-aggressiveness. It’s a very human film in that regard, something that O’Sullivan manages to bring to the table that’s fresh and also invigorating at the same time.

It makes for a heartfelt watch when you’re wanting to watch something that reminds you of the goodness out there in the world, especially when everything appears to be heading further and further down the drain right now (though maybe not to the extent of this film, which features a toilet blockage scene that, again, feels very real and of the moment instead of played for gross-out humour like it so easily could have been). A likeable and surprising tale of womanhood and friendship, Saint Frances may not entirely appear saintly, but it’s got an angelic view of the world.

Saint Frances takes a sometimes surprising but often likeable look at womanhood from the perspective of writer/star Kelly O’Sullivan, who shines in both script form and in front of the camera in a story which takes a mature and enlightening approach to some very heavy topics that are played out with both humour and respect.

Want to decide what the movie’s like for yourself?
Check out Saint Frances
via