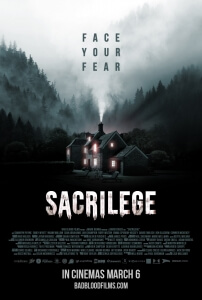 BASICALLY…: A weekend away for a group of friends turns into a nightmare when a nearby pagan cult decides to sacrifice them to their god…

Never heard of this movie? Don’t worry, nobody else did either, until they started getting trailers for it not that long ago. After seeing it, you’ll understand why it’s slipped under the radar.

However, when reviewing a film like Sacrilege, it is a little difficult to go all out against it; this is a low-budget horror film from newly-christened distributor Bad Blood Films, who seem to be setting out to do what Blumhouse and even Hammer back in the day once did and making tons of movies – mostly horrors, it seems – on the cheap rather than throw all their eggs into a basket that might not make enough money for them. In that sense, you kind of have to grade this movie on a curve, because it isn’t working with a huge budget and therefore doesn’t have access to many of the things that would help this movie achieve its ambitions, so to criticise this movie for looking and feeling cheap seems like an unfair jibe because, well, it is cheap.

Instead, you have to try and find other avenues which this movie can succeed at, but unfortunately even those come up short. Maybe the plot is interesting? Well, it isn’t. Maybe the characters are smart and make good decisions? They aren’t, and they don’t. Maybe it’s well written? Nope. Is it well-made? Not particularly. What about the acting? Don’t get us started. Maybe it’s at least scary? Puh-lease. As it turns out, even when attempting to grade this movie on a curve, there is barely anything to it that makes it feel worthwhile, and it just turns out to be yet another lame horror movie in a market oversaturated with them.

The plot is just about everything you’d expect it to be; a group of friends – Kayla (Tamaryn Payne), Trish (Emily Wyatt), Blake (Sian Abrahams) and Stacey (Naomi Willow) – decide to go away to a secluded house in the middle of the woods for the weekend. One thing leads to another, and the four of them stumble upon a pagan cult that surreptitiously chooses them as their latest sacrifices; cue the supernatural hallucinations, which prey on each one of their fears, and they must then fight for their survival.

Beyond the fact that this is exactly the kind of stock horror movie plot that the movie The Cabin In The Woods was both satirising and paying homage to, it is also the kind of movie that borrows heavily from so many other horror movies that it leaves you wishing you were watching any of them instead. It rips off everything from The Wicker Man to It to, of all things, Book of Shadows: Blair Witch 2, presumably to disguise how there are so few redeeming qualities in its own material, which wouldn’t spook an easily-startled horse and lacks the smarts to say anything outside of its cheap scares.

This is writer-director David Creed’s directorial debut, and you can definitely tell that this was made by someone with zero filmmaking experience; the filmmaking is awkward, because every once in a while there will be a moody atmospheric shot but then it’ll be followed by ridiculous and blatant CGI that would look bad even in a modestly-budgeted horror film. He also doesn’t seem to have given substantial direction to his actors either, who all give one-note performances that consist of weird line deliveries and zero personalities outside their paper-thin descriptions; in fact, the way their performances are, not to mention the voyeuristic ways in which some of these ladies are shot and clothed, it actually does feel like a porno is about to happen at any given moment (and at one point, it sort of does turn into one with an out-of-nowhere sex scene between two characters whose relationship up to this point was unclear).

This might as well be a porno, because these characters constantly do stupid things that leave them royally screwed. These main characters are so dumb that they will just accept anything that they are told, even when they know full well what it is that’s causing all of this. For example, they decide to follow a guy that they just met – who, for context’s sake, had just snuck up on them in the middle of the night while they’re partying together – into the middle of the secluded woods where people who are giving off as many red flags as this guy is are doing some weird, creepy stuff that anyone, whether or not they’re drunk and high, would find unsettling. Later on, there are several instances where these characters constantly make such stupid mistakes that it causes any empathy you had towards them – which isn’t all that much to begin with – to immediately evaporate, leaving you with the thought that they’re so dumb that they might as well get what they deserve.

It’s a terribly written movie, with dialogue that’s painfully on-the-nose – they even say “what’s the worst that could happen?” at one point – and a resolution that’s frustratingly anti-climactic, none of which helps these actors who, in their defence, have been given some rubbish material to work with. The whole movie in and of itself is rubbish, and not a particularly great start for this company which, if they’re to compete with Blumhouse or even Hammer, needs to find better scripts to turn into actual movies before they can get anywhere.

Sacrilege is an extremely lame low-budget horror that has all the hallmarks of a bad movie in this genre – lack of scares, questionable dialogue and filmmaking, one-note acting, and characters who constantly make stupid mistakes – but doesn’t even have the courtesy of making any of them interesting.

Want to decide what the movie’s like for yourself?
Check out Sacrilege showtimes in London
via