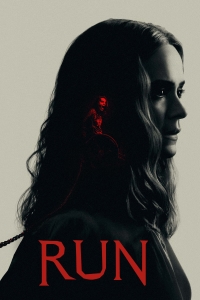 BASICALLY…: An isolated teen (Allen) discovers that her overprotective mother (Paulson) is hiding some disturbing secrets…

While us Brits will likely never get access to US streaming service Hulu – the recently-launched Star section on Disney+ is perhaps the closest we’ll ever come to it – it’s crazy that we’re still so far behind on receiving some of the films that debut exclusively on there. Next week will finally see the UK debut of the hit comedy Palm Springs, which originally debuted on the American streamer back in July, and now making its way quietly to Netflix is the well-received psychological thriller Run, which during its opening weekend became Hulu’s most-watched original film, and quickly became a talked-about topic on social media.

Receiving a movie months after nobody would stop talking about it feels somewhat redundant, because you’ve heard so much about the numerous twists and turns that it threatens to no longer be such a surprise. However, that doesn’t stop Run from being a taut, at times intense thriller that really leaves you on edge just from the terrifying premise alone, and certainly because of the mere presence of a legitimately frightening Sarah Paulson in the main role.

Paulson is Diane, the mother of teenager Chloe (Kiera Allen), who is wheelchair-bound and sore-ridden from an apparent lifetime of illnesses. Diane is fiercely protective of her daughter, home-schooling her to high-school level, and always checking the post to see if Chloe has been accepted into the college of her choice. However, Chloe soon begins to make a number of alarming discoveries about her medication and the levels that Diane will sink to in order to keep the two of them together, and soon she is confronted with a horrifying truth that instantly makes her situation a lot more sinister than it previously seemed to be.

Chances are, if you’ve been hearing people talk about this film online since its US debut, you probably already know what you’re in store for here. Despite that, though, director and co-writer Aneesh Chaganty – whose previous film was the highly effective found-footage thriller Searching with John Cho – keeps the momentum building bit by bit until it’s no longer possible to contain it. With each startling new reveal, you can feel the levels of dread and anxiety slowly bubbling up to the surface, because it’s a tightly-written movie which easily gets you on Chloe’s side and just as effortlessly makes you really scared of this mother who, even when she’s just sitting quietly in the background, gives off unholy vibes. There are certainly traces of Hitchcock’s Rear Window and even Rob Reiner’s Misery in this story and some of these performances, but it’s got enough of a solid fast pace as well as some seriously chilling filmmaking skills to project enough of its own voice.

The movie is, for the most part, a two-hander between Sarah Paulson and debuting young actress Kiera Allen, who actually is a wheelchair user in a small gain for disabled representation. Allen is very good here, expertly pulling off the scared-shitless look when it really hits the fan, and especially in parts which are a lot more physically demanding and demand a load of respect for the actress for having the guts to perform in front of a camera. Then, of course, there’s Sarah Paulson whose unnerving central performance is excellently unhinged, which even before it becomes apparent that something is up with her still gives off an impression that something is not right; the actress plays it so cool and calm that it’s terrifying to even comprehend how she’s able to stay one step ahead of her suspecting daughter. It’s a performance that’s spine-tingling to watch, particularly when it’s revealed what exactly her backstory is and what she’s actually been doing this whole time.

At just under 90 minutes, Run definitely feels like a quick sit, which given its relatively fast pace does make it a little jarring when you realise that all of this pertinent information is only being discovered in such a short amount of time. Perhaps a few more minutes might have let some of these things simmer for a little while longer, because it is very quick how this teenager is starting to piece together all of these sinister little things about her mother.

Slight pacing issues aside, this is a solid thriller with a compelling plot that grows thicker and thicker with each new reveal, and as an added bonus we get Sarah Paulson being crazy for a good chunk of her screen time, and as anyone who has ever watched American Horror Story knows, a crazy Sarah Paulson is always captivating entertainment.

Run is a solid psychological thriller that filmmaker Aneesh Chaganty directs and co-writes with traces of Hitchcock but also enough of its own voice as the plot unfolds more and more, and the two-hander lead performances by an impressive Kiera Allen and especially an unhinged Sarah Paulson steer the chilling narrative towards an intense conclusion.

Run is now available on Netflix.