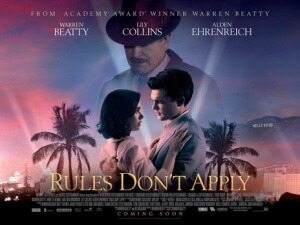 BASICALLY…: A young contract actress (Collins) and her driver (Ehrenreich) form a special bond, all while their employer – the elusive billionaire Howard Hughes (Beatty) – gets into a series of escapades…

Warren Beatty’s first film in years as both an actor – he hasn’t appeared on-screen since 2001’s Town & Country – and a filmmaker – he hasn’t directed anything since 1998’s Bulworth – is a frustrating experience. On the one hand, it’s a project that he’s wanted to do for over 40 years, a film about the legendary Hollywood personality and entrepreneur Howard Hughes, and it’s rather nice to see a passion project like this from a major talent like Warren Beatty get made and released into a good amount of cinemas (that, and it’s just cool to see Warren Beatty back on the big screen). However, on the other hand, Rules Don’t Apply is a heavily flawed picture, almost to a point where it would be fit right alongside notorious failures by Hughes himself like The Conqueror or Hell’s Angels, and seriously struggles to find the right way to express its own fascination with the subject.

The film initially starts off as a blossoming romance between limousine driver Frank (Alden Ehrenreich) and contract actress Marla (Lily Collins), which is forbidden due to a clause that prohibits talent-and-staff relationships. For this part, it’s perfectly decent; actors Ehrenreich and Collins are genuinely sweet together, and they are a couple who you could absolutely see being with each other by the film’s end, both of them having idealistic goals that are made intriguing thanks to their initial charm and likability.

But then, Warren Beatty enters the picture as Howard Hughes, firstly as a shadowy, mysterious figure which honestly suits him best, but then things turn sour when Hughes screws (in both senses of the word) everything up and basically hijacks the film already in progress. This is, no surprise, the point in the movie where things started to go south and fast, because the film was honestly working okay as just this sweet little romance set against the backdrop of old-timey Hollywood, but then for whatever reason Beatty just got bored and decided to turn it into a straightforward Howard Hughes biopic, and not even a very good one at that.

I felt Martin Scorsese’s The Aviator casting a huge shadow over this film, not just because it was a far better structured and well-rounded film, but because it depicted the character of Howard Hughes far better than this movie does. Here, Beatty may appear to be having the time of his life playing this role, but he’s an utter nuisance to everyone else, who feel as if they’re ready to straight up punch him in the face. Sure, Hughes certainly led an eccentric and difficult lifestyle, from his obsessive behaviour to being a complete nutcase when flying in planes, but Beatty depicts him as just the most insufferable bastard you could ever imagine, one that’s annoying, creepy, and not even that interesting a character, which is saying something because this is Howard Hughes, one of the most fascinating personalities in Hollywood history. On top of that, you never really buy Warren Beatty as this person; similar to Leonardo DiCaprio in The Aviator, you only see the actor playing him and never fully inhabiting the body of the real-life person he’s meant to be representing (it’s sad that the best depiction of Howard Hughes on-screen to date is still Terry O’Quinn in The Rocketeer). Again, it’s sad because Beatty has wanted to play this part for nearly half a century, but he just couldn’t figure out a way to do this larger-than-life persona justice on the big screen.

It’s also a weirdly executed film as a whole, because even in the earlier parts of the film the editing feels very off, with scenes just coming to a complete stop after seconds of screen time, as do some transition scenes with a lively late 50s/early 60s soundtrack playing that abruptly cut to something else entirely. The cinematography is nice, but the film uses stock footage for establishing shots which makes the cut to scenes clearly shot in HD all the more jarring, and sometimes the framing of a scene makes it seem even odder than it already is, like scenes set almost entirely in shadow that are meant to add a mysterious element to things, but it just comes across as a creepy scene from a psychological thriller that just happens to be well-shot. Incidentally, don’t let the extended cast list fool you; aside from one or two extended scenes with actors like Matthew Broderick and Annette Bening (Beatty’s real-life spouse), most of them are just cameo roles that really make you wonder what the point was of them even being there (Ed Harris shows up for less than a minute of screen time, and then is just gone; thanks?).

Everything about Rules Don’t Apply was just an odd sit, and is made all the more frustrating because you can feel the high levels of talent involved with making this film, especially with Warren Beatty who, bless his heart, is having a blast both acting and directing it, but none of it is really coming together the way he’s probably intending it to. It’s good to have you back on the screen, Mr. Beatty, it really is, but goddammit, you need to make a much better film than this next time.

Rules Don’t Apply is a frustratingly unfocused mess of a film, which despite director/star Warren Beatty’s presence after an extended period of time away from the camera never gets off the ground the way he was probably intending, hijacking a much better story in favour of something about his own portrayal of Howard Hughes (and not a very good one at that), and making weird filmmaking choices that make it an even more irritating experience.