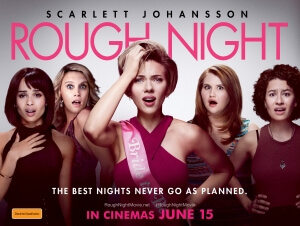 BASICALLY…: Five college friends (Johansson, McKinnon, Bell, Glazer, Kravitz) get together for a bachelorette party, which takes a dark turn when they accidentally kill a male stripper…

When the trailers for Rough Night first debuted online, a worrying amount of dislikes and hateful comments appeared on the YouTube pages, many of them criticising the mostly-female lead cast and its apparently awful humour. This irked me because after last year’s Ghostbusters, another female-led comedy that got virtually butchered by the online community, I had assumed that all the hate was because of it being a new version of a beloved classic, no matter what the gender of the lead cast was; but now having seen similar hate geared towards this film – which also coincidentally is being released by Sony – it became pretty clear that in fact, a lot of internet trolls are just sexist dicks. That’s why I, defiant of the questionable humour made available during those initial trailers, held out hope that this would legitimately prove the haters wrong once and for all.

Instead, Rough Night is indeed this year’s Ghostbusters, in that it’s a very “meh” movie that’s not really all that funny but features at least one genuine laugh-out-loud moment and a genuine comradery within its lead cast.

The film begins as Scarlett Johansson’s Jess prepares to go on her bachelorette party to Miami with college friends Alice (Jillian Bell), Frankie (Glazer) and Blair (Kravitz), as well as her Australian friend Pippa (Kate McKinnon). Once there, they indulge in all sorts of fun from doing drugs to living it up in nightclubs, to eventually hiring a male stripper that comes to their house and performs for them… until he is accidentally killed from a blow to the head, which leads to the women trying their hardest to cover up the death before anyone finds out what happened.

The plot to this film has been likened by many critics to the late-90s black comedy Very Bad Things, which was basically the same premise as this (only with the genders reversed) but took things into a considerably darker direction, with deaths left and right, and ending on a rather mean-spirited note. Rough Night feels like it was made for people who really did not like Very Bad Things, and wanted something that was a bit easier to swallow than all that carnage; a decent enough gesture, only Rough Night not only takes considerably less risks that makes it stand out from even some of the other mild black comedies like Horrible Bosses, but it also feels like one giant missed opportunity for some great sight gags and intriguing plot turns. Going back to last year’s Ghostbusters, while it wasn’t the catastrophe that many people were predicting, it also wasn’t anything special and felt like a very safe studio project that offends no-one and achieves almost nothing; the same can be said about Rough Night, which feels very manufactured and customised to what the audiences wants to see, without any freshness or even that much charm to it.

What little charm there is in this movie is from the genuine comradery of its lead cast, all of whom work with the thin material they are given to either ad-lib their way through things – which, for non-fans of the whole line-o-rama technique in modern comedies, will likely annoy you to no end – or liven up what is on paper not that great of a joke to begin with. While Johansson is having fun in a rare comedic role (although she is playing the straight (wo)man of the group), McKinnon is easily the funniest part of the film; she’s already a talented comedienne and actress, as evidenced by her roles on Saturday Night Live and other films including, yes, Ghostbusters, and here she really makes her character’s oddness and Australian accent work wonders in her favour, making her a laugh riot in just the small inflictions of her voice, something that is not easy for any comedic actor to pull off. Meanwhile, Bell will either entice or aggravate you depending on your viewpoint (and I can understand and sympathise with either), and both Glazer and Kravitz do fine with what are basically the least developed characters in the main ensemble; regardless, all of them work great with one another and you do believe that these people are legitimately close with one another, making it plausible that they would all want to hang out together.

However, they’re all still working from a script that just isn’t very funny, and doesn’t take as many risks or as opportunities as it really could. The main plot thread of covering up the death of this male stripper is resolved way too cleanly, with little in terms of actual consequences and lessons learned, and even then the things they try and do in terms of physical comedy with this corpse aren’t quite as effortful as the likes of Weekend at Bernie’s. By the end of it, you’re left a little disappointed that it didn’t quite go there in terms of darkness and nasty overtones, and feel somewhat ripped off that it didn’t take the kind of risks that you were hoping for.

Ironically, the creation of a much safer version of Very Bad Things has led us wishing for something along the lines of Very Bad Things, because then at least it would get so dark that it would actually be memorable; instead, Rough Night is an in-one-ear-and-out-the-other comedy, something that will be long-forgotten mere weeks after you see it, and by then will be about as lively as the corpse at the centre of all of this.

Rough Night is an all-too-safe black comedy which, despite the efforts of its talented cast, never takes advantage of the risks or opportunities presented from its very premise, making it a rather unmemorable and mostly laugh-free experience where you’re pining for something with a bit more teeth to it, like Very Bad Things.