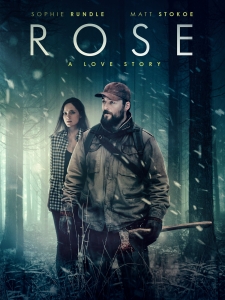 BASICALLY…: Rose (Rundle), who lives in isolation with her husband (Stokoe), finds her idyllic life disrupted by the arrival of a stranger (Gray)…

I’ve got to hand it to Rose: A Love Story, because in its own way the slow-burn thriller does deliver exactly what it’s selling on the tin. It is definitely a love story, albeit the slightly warped kind that involves rabbit traps and leeches every now and then, but it’s technically a romance nonetheless that writer and co-star Matt Stokoe crafted from the heart, as a project for him and real-life partner Sophie Rundle (of Peaky Blinders) to star in.

You can clearly tell that the two of them have a strong connection, which is part of what makes the film work as well as it does, but don’t expect the rest of the film to be just as clear about anything else, which might make or break the experience for you depending on your desire for straightforward answers to certain mysteries. Either way, you’d better have a lot of patience with this one because it’ll take a while for things to become even more understandable.

The film, directed by Jennifer Sheridan, introduces us to married couple Rose (Rundle) and Sam (Stokoe), who live together in an isolated cabin somewhere in the middle of the woods. Rose spends her days inside trying to write stories on her typewriter, unable to go outside in the daylight or without a face-mask, while Sam is out collecting firewood and rabbits that get caught in the numerous traps he’s placed around their home. The two, however, remain very much in love, with him going out of his way to make sure that his beloved wife is safe and protected from the outside world, since she appears to suffer from a mysterious illness that requires her to consume blood, which Sam provides by placing leeches all over his legs from time to time. We spend a good portion of the film’s running time with just them going about their business together, including his incredibly rare trips into town for much-needed supplies, until a young woman named Amber (Olive Gray) stumbles upon their hideout and is forced to bunk with them for a couple of days. It’s through Amber that we finally see someone comment on how odd and disturbing their reclusive lifestyle is, and as soon as the bigger questions get asked, that’s when things really kick up a notch.

Rose: A Love Story constantly straddles a line between an intimate romance and a supernatural thriller, but it’s clear which side that Stokoe’s script favours the most, because any and all hints of something unhuman being behind everything is kept to an absolute minimum, only emerging when it needs to and not a moment more. Instead, the film focuses a lot of its attention on the central pairing of its two lead characters, and it is here where the film shines the brightest; Rundle and Stokoe, who are both very good in the movie, do share strong on-screen chemistry together, which sounds obvious since they are a real-life couple but it’s nice to see them working well opposite each other in front of a camera as well. Their relationship, no matter how sinister parts of it can feel, is one that is clearly built on love and understanding, because even when they argue or disagree on things they find it near impossible to hate each other over it, partly because their situation doesn’t give them much of a choice. Stokoe’s writing lets them be people who happen to be very much in love before anything else, and the actors’ believable turns help to reinforce that fact.

When it does start to become more and more evident that something is not entirely right about this couple, though, it’s certainly intriguing right up until the end, but it is one of those films that does play a lot of its cards close to its chest until the very last moment. Unlike something like The Night, though, this one has good enough lead characters who are easily carrying the movie, and who you can easily identify as actual people instead of just people we happen to be following in this story. Nevertheless, you’re left waiting patiently for the other shoe to drop, and by the time it finally does it’s perhaps far too late in the game to be revealing such a major revelation about certain characters. The movie does establish a slow-burn approach to this climactic moment, but it seems like a bit more time could have been spent on it to give it the satisfying pay-off it deserves.

It’s also understandable why a film about a couple living in total isolation with one battling a mysterious virus wouldn’t be many people’s cup of tea in this day and age, but Rose: A Love Story does have some moody qualities – least of all from Jennifer Sheridan’s icy-cold direction – that elevate it above the typically trashy COVID-sploitation genre it so easily could have been.

Rose: A Love Story is a moody thriller that is greatly boosted by the strong chemistry and central performances of real-life couple Sophie Rundle and Matt Stokoe (also the film’s writer), though its intentionally ambiguous mysteries might leave some struggling with the slow pace and rushed conclusion.

Rose: A Love Story is now available to rent or buy on digital platforms, including Amazon Prime Video.