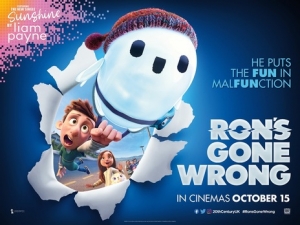 If tech giants like Facebook and Apple aren’t going to step up and teach children about the dangers of the internet, then the movies might as well fill that void. So far this year, we’ve had at least two major animated features which satirise the ins and outs of modern technology and humanity’s reliance on social media; the first being Netflix hit The Mitchells vs. The Machines, and now Ron’s Gone Wrong which might not be as kinetic as the Lord/Miller production, but still has plenty of vital lessons for young audiences regarding safe practise when online, as well as an undeniable beating heart at its ambitious centre.

The film is the first feature from new cartoon studio Locksmith Animation, founded by Aardman alumni Sarah Smith (the director of that studio’s festive classic Arthur Christmas, and is also co-director on Ron’s Gone Wrong as well) and Julie Lockhart, who have clearly had some of their former company’s creativity brushed off on them if their debut film is anything to go by: set in a world where tech conglomerate Bubble has introduced a robot companion that can incorporate anyone’s online profile and use that to make new friends, every kid in the world now has a “B-bot” to call their own. The only one who doesn’t is lonely middle-schooler Barney (Jack Dylan Grazer), who can only watch as his former friends are endlessly consumed by their online personas as exacerbated by their B-bots. For his birthday, though, his dad (Ed Helms) and Romanian grandmother (Olivia Colman) manage to get Barney his very own B-bot – however, the one they picked turns out to be a constantly malfunctioning model known as Ron (Zach Galifianakis), who among his many glitches lacks code which makes him like all other B-bots, and makes him a very special friend for Barney to call his own. Naturally, though, the folks at Bubble are desperate to get their hands on Ron before anything bad happens to both their sales and their reputation, and so it is up to Barney to protect his new friend from harm.

Family movies with this type of plot – the lonely kid who befriends a unique specimen, and must keep them away from guardians and authorities at whatever cost – are a dime-a-dozen, from E.T. to The Iron Giant all the way to something like Big Hero 6. Ron’s Gone Wrong, though, goes in some interesting extra directions, which keeps things engaging even when you probably know how the rest of the story is going to play out. For instance, there is a section of this movie where characters have to hide out in the wilderness just to escape the bad guys, and it gets surprisingly intense as lives are genuinely put at risk, raising the stakes higher than a regular family movie like this would care to go. There are also a lot of very endearing moments where people will confide in each other about their own feelings of failure and anxiety, and the movie does a good job at sticking to a certain tone within these scenes without resorting to cheap toilet humour. It’s certainly a movie with heart, but also a real sense of ambition in its emotional range as well as its storytelling which seeks to go a little further than its contemporaries.

Going back to its overall themes, though, Ron’s Gone Wrong is a much gentler and perhaps safer social commentary on modern technology than something like The Mitchells vs. The Machines, but that isn’t to say that its approach is any less admirable, especially when it shows what the negative sides of technology and social media can do to vulnerable young children, who may be targeted by online bullying or media manipulation. It might not be the first such movie to tackle heavy themes like these, especially in an era when the likes of Facebook and Apple are being attacked more than ever for their failure to prevent the spread of misinformation or allow their users complete privacy, but Ron’s Gone Wrong does get across a lot of important messages in an endearing and straightforward manner without getting too preachy. It’s easy to see something like this or The Mitchells vs. The Machines get a firm following because of their ability to comfortably address such modern topics while also being legitimately fun and watchable movies in their own unique ways.

Like Ron himself, parts of the movie do lag – at first you think you are watching the third act play out, but then are surprised to see that there are at least another twenty minutes left – and there are some characters who turn out to be way too cartoonish even for an animated film like this (the main villain might as well be twirling a moustache and laughing maniacally from being a desk), but there are plenty of fun characters, enough endearing moments and some bright – though not always laugh-out-loud – spots of humour to keep most audiences thoroughly engaged. It’s good fun, and while it might not get everything right Ron’s Gone Wrong certainly keeps itself above complete malfunction.

Ron’s Gone Wrong is an endearing family movie with strong central messages about the dangers of modern technology and social media, told through an emotionally investing, if familiar, plot that most kids can firmly identify with.

Ron’s Gone Wrong is now showing in cinemas nationwide – click here to find a screening near you!