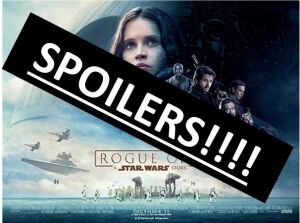 BASICALLY…: As the Death Star nears completion, a team of Rebel fighters are recruited for a dangerous mission to steal the plans that could lead to a major victory for the Alliance…

*WARNING: THE FOLLOWING REVIEW CONTAINS MASSIVE SPOILERS FOR ROGUE ONE: A STAR WARS STORY. IF YOU HAVE NOT SEEN THE FILM AND WANT TO GO IN WITH FRESH EYES, READ OUR SPOILER-FREE REVIEW BY CLICKING HERE.*

*SERIOUSLY, IF YOU HAVEN’T SEEN IT YET, THEN STOP RIGHT NOW. THERE’S NO TURNING BACK AFTER THIS. YOU HAVE BEEN WARNED…*

So, if you’re still reading this, then you most likely have seen Rogue One: A Star Wars Story and thought it was awesome/awful/all kinds of “meh” (delete where appropriate). You may have also read the spoiler-free review that gives you much more detail about my personal thoughts on the film, so I will avoid repeating myself in this one, except when talking about all the stuff I couldn’t reveal without giving anything away.

Bottom line is, Rogue One is still a good movie, but let’s REALLY talk about what makes it stand out.

This has to be not only the ballsiest Star Wars movie ever made, but also the ballsiest major Hollywood production in years. After all, what other $200 million blockbuster, made by Disney no less, can you think of that kills off its entire main cast? Yup, that’s right, everyone that’s built up in this movie, including Felicity Jones’ protagonist Jyn Erso, gets the axe here during the climactic battle on the beach planet Scarif, and the way that third act plays out is more or less like – what else – a war movie, one that takes no prisoners or throws in any last-minute twists to ensure at least one of them survives to tell the tale afterwards. But no, they all go out in a blaze of glory by the end, whether it’s in a fiery explosion or a gun battle or, in Jyn and Diego Luna’s Cassian Andor’s case, being completely obliterated in an attack by the Death Star. You’re left rather speechless that a film with this huge a budget and made by an otherwise family-friendly distributor would pull off this kind of stunt, and to be honest it’s a decision that should be applauded as a brave decision by any major studio, let alone Disney. Think about it: how easy would it have been for the House of Mouse to completely veto Lucasfilm’s intent to pull this kind of thing off? After all, they own their asses along with Marvel and Pixar, but even those films haven’t gone so far as to kill off their entire main cast (yet), at least not with Disney’s full approval. But it seems like they trusted the filmmakers enough to go completely bananas with their intentions, and it’s a sign of Disney’s full faith in their storytelling abilities that they allowed them to pursue this brave twist with no barriers, making this a truly unique turn in modern studio filmmaking. So, to Disney, as well as all those at Lucasfilm, we give you the slow clap:

There are also some things elsewhere in the movie that might not be entirely expected by audiences, even hardcore Star Wars fans. For instance, I bet you didn’t expect Peter Cushing to show up again as Grand Moff Tarkin, did you? Cushing, who has been dead for over twenty years, has been resurrected by the power of motion-capture and a damn good voice impersonator (unless they just made his dialogue through old archival audio clips; either one wouldn’t surprise me), but the scariest thing about it all is how good the effects work on him actually is. Sure, there are a couple of instances where you see the uncanny valley slip into full force (no pun intended), but for the most part, he really looks like he’s there, interacting with actors in 2016 and having proper conversations with them, as though he somehow never really died and even stayed looking the same as he did back in 1977. I like to think it was the same kind of technology that de-aged Michael Douglas in Ant-Man as well as Robert Downey Jr. in Captain America: Civil War, and since those instances were alarmingly good as well, it should come as no surprise that for a much more effects-heavy film like this it looks and feels more believable than a lot of people will probably give it credit for. There is another instance of this at the very end, where a de-aged Carrie Fisher reprises her role as Princess Leia right before her fateful capture at the beginning of A New Hope, and in both Fisher and Cushing’s cases, they could each have prolonged careers if they wanted, if this is anything to go by.

Finally, let’s talk briefly about the appearance that everyone wants to know about. It’s no secret that Darth Vader is in this film, as he was heavily plastered all over the trailers and posters. However, as you might expect, his is more of a glorified cameo, appearing in only a couple of scenes while the rest of the film rightly focuses on the standalone story and characters. But man, did they know how to use Vader sparingly, as both of his scenes offer some truly strong moments for the iconic villain, from an awesome reveal to an end scene that finally allows us to see the Sith Lord in full badass mode. It’s not on-screen for long, but when it is it serves as a fresh reminder of why Darth Vader is so beloved by many audiences.

That’s basically all I really wanted to talk about here that I couldn’t in the spoiler-free review, and it doesn’t change my opinion of Rogue One being a particularly good movie which, though not perfect, has some great moments that you simply have to see on the big screen.

Actually, no, I already did this for Rogue One; check the spoiler-free review if you really want to read this part.